As the curtain rings down on 2019, the year will be remembered for a number of hits and misses. Perhaps the biggest hit is that the economy completed a marathon, having outlasted all previous expansions by at least six months and still going. The latest annual leg of the journey generated more than 2 million new jobs for a record ninth consecutive year, extended the longest stock market rally on record, and restored confidence among workers and households that was badly battered during the Great Recession and financial crisis. 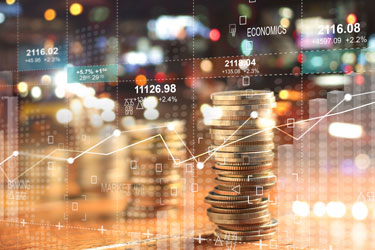 However, the year was not without its misses. For one, it completed the marathon more like a turtle than a hare. Following the slow-grinding steps of the previous ten years of the expansion, the economy also advanced at a glacial pace during the past year. The final quarter has yet to be tabulated, but GDP is likely to end up around 2.0 percent higher than its year-earlier level, punctuating the weakest growth rate of all postwar expansions. And while the jobless rate fell to a 50-year low of 3.5 percent, workers did not reap the rewards they enjoyed in past upturns. Wage growth peaked at 3.4 percent early in the year – much weaker than previous peaks – and has since stagnated, ending the year at just over 3.0 percent.

What’s more, unlike past expansions the government missed a time-honored opportunity to get its fiscal house in order. Historically in the expansion phase of a business cycle, tax revenues increase faster than government outlays, narrowing a deficit that typically grows during recessions. Not so this time. Thanks to massive tax cuts and increased Federal spending aimed at jump-starting growth, the deficit ballooned towards $1 trillion in fiscal 2019 and is poised to exceed it in 2020 and for several years thereafter. With such a monumental flow of red ink, lawmakers will be in no mood to provide fiscal stimulus should the economy falter in 2020. That, of course, leaves the central bank to do the heavy lifting. But with interest rates so low, the Fed has little ammunition to combat a downturn. The question is, will Washington or the Fed be needed to bail out the economy in the first year of the new decade?

Despite the widely accepted notion that expansions don’t die of old age, the longer it goes on the greater is the number of economists predicting that the end is just around the corner. We are not one of those doomsayers but recognize that recession threats exist and they can easily nudge the economy over the edge. One reason: the lackluster pace of growth that has characterized the expansion leaves the economy with little cushion to withstand external shocks, such as an oil crisis, a geopolitical conflict or some other unforeseen event.

Some believe that only the huge fiscal stimulus noted earlier as well as the low interest rates engineered by the Fed enabled the economy to withstand a severe global slowdown and escalating trade wars over the past 18 months. Not all sectors escaped those headwinds unscathed, however, as manufacturing activity fell into a deep slump from which it has yet to emerge. Meanwhile, the growth-boosting effects from the tax cuts enacted in 2017 are waning and will not provide the economy with any impetus next year.

One major threat to the expansion took a less menacing turn as the year drew to a close. In mid-December, the U.S. and China reached a limited accord on the long-simmering trade war that has delivered a major blow to the economy’s industrial sector. The phase-one deal cuts tariffs on a wide range of Chinese imports and removes the new tariffs that were scheduled to take effect on December 15. In exchange, China agreed to substantially increase purchases on U.S. agricultural products, open its markets to American financial institutions and provide U.S. firms with more intellectual property protection. The financial markets heaved a big sigh of relief when the agreement was announced as it came at just the right time. The new tariffs that were scheduled for December 15 would have been applied to a host of consumer goods, including cell phones, laptops and apparel, hiking their prices accordingly and squeezing household budgets.

But while the agreement stoked optimism in the financial markets, and helped send stock prices to new record highs, it probably won’t do much to change the economic outlook. The most important feature of the deal is that it avoids the December 15 tariffs and rolls back existing tariffs on $110 billion of Chinese imports that were imposed on September 15 from 15.0 percent to 7.5 percent. But it still leaves stiff tariffs on two-thirds of Chinese imports, totaling $360 billion, which has already sliced an estimated 0.3 percent from GDP in 2019. 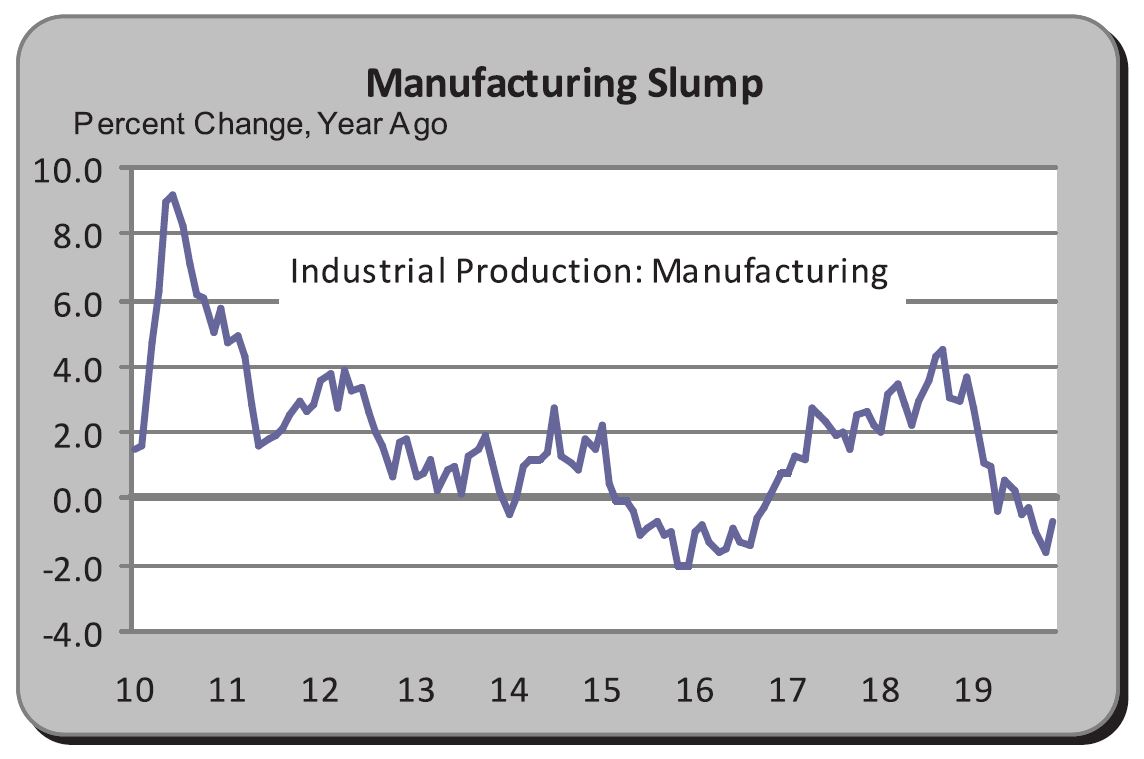 The main positive impact from the phase-one trade deal is that it lessens the drag on economic activity that would otherwise take place had the full slate of tariffs remained in place. Until or unless the remaining tariffs are also discarded, they will continue to be a growth deterrent. Hence, a protectionist policy is still very much in place and its severity will depend entirely on the fate of the phase-two negotiations. Most knowledgeable observers agree that this phase will be much more difficult and complex than the first, as the U.S. will be seeking structural changes that Chinese officials have long resisted.

Most important are industrial subsidies and preferential treatment accorded to state-owned enterprises that gives them a competitive advantage in key global industries, such as solar panels and steel. These so-called SOEs are an important driver of growth in China and officials there, already concerned about a slowing economy, will not easily abandon the practice. Meanwhile, monitoring compliance with the issues agreed to in the phase-one deal will be challenging, and any perception that they are not being followed would prompt the administration to snap back the tariffs it agreed to roll back and reimpose those it abandoned.

Simply put, it would be a mistake to conclude that the phase-one deal with China opens the door to peace and harmony on the trade front. President Trump has displayed a strong affinity for using tariffs as a negotiating tool to gain advantage at the bargaining table. Aside from the direct effects that the trade wars, which include rifts with Europe and our NAFTA trading partners, have had on the economy, the indirect effects have been just as damaging.

Indeed, uncertainty over trade policy has been a major source of angst among business leaders. An array of surveys, including one by the Business Roundtable, reveal that business sentiment among CEOs of large corporations has sunk dramatically since the onset of the trade wars nearly two years ago. Clearly, that has not curtailed hiring activity, as job growth has remained solid throughout the period. But businesses increase staff mainly in response to current and expected near-term demand for their products. If demand sags or falls off abruptly, workers can be terminated or their hours cut back.

That’s not the case for capital spending, which requires a long-term commitment of funds for projects that could severely damage balance sheets if they fail to generate expected profits. That, in turn, requires long-term planning that is challenging in an environment of trade uncertainty. It is no coincidence that investment spending by business has been disappointing in recent years despite the record length of the expansion and huge corporate tax breaks that were designed to stimulate such outlays.

The tentative pact with China diffuses for the moment the long-simmering trade dispute that has not only impeded growth but also rattled the financial markets, causing wild swings in stock prices in response to the ebb and flow of trade negotiations. As well, the apparent agreement with Mexico and Canada on a revised NAFTA could also be a sign that trade disruptions will be less severe going forward. If so, the economy will avoid one of many possible external shocks that typically short-circuit an expansion. 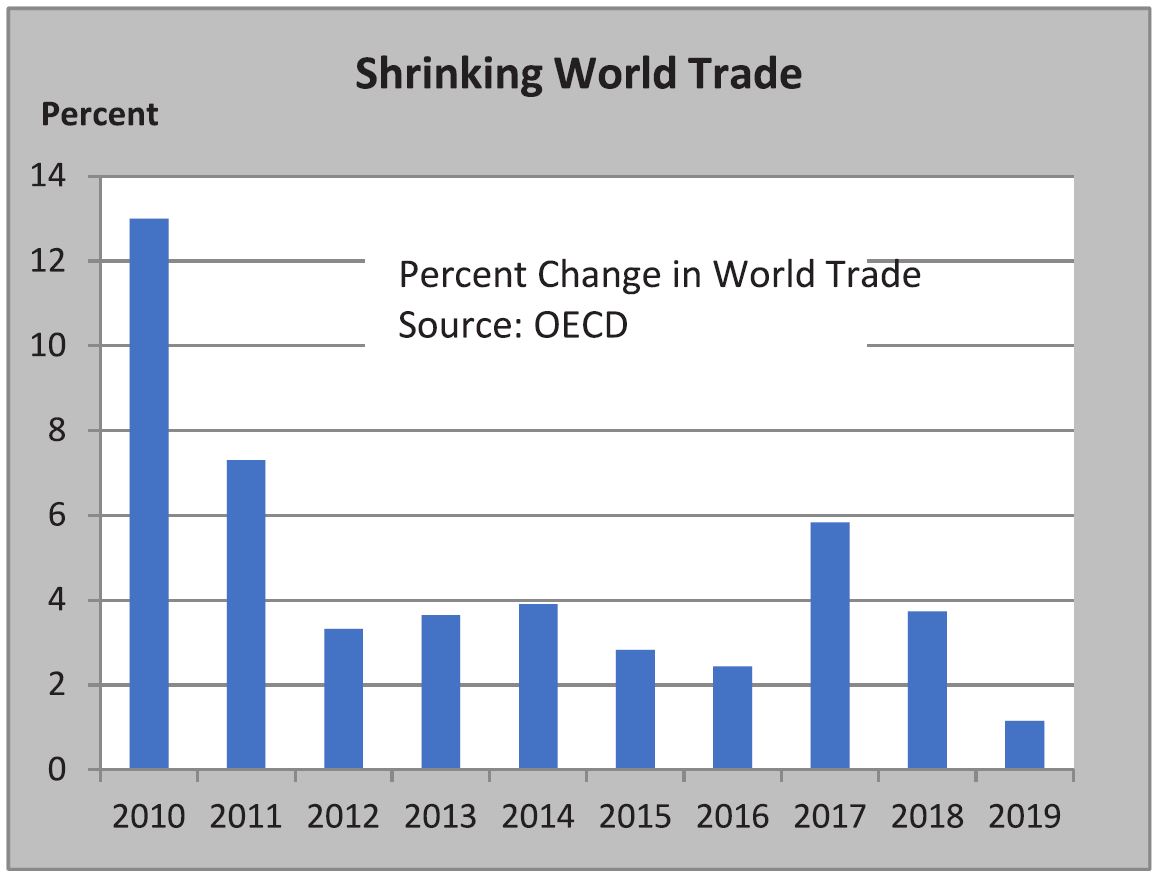 Assuming that is the case, the odds of a recession occurring in 2020, which reached a fever pitch over the summer, looks far lower now. Indeed, recession risks started to cool in the fall as a series of economic reports came in stronger than expected, most notably the November jobs report. The sturdy 266 thousand workers added to payrolls that month lifted incomes and sustained the gains in purchasing power that will underpin consumer spending in coming months. As long as consumers, the economy’s main growth driver, keep their wallets and purses open, the record-long expansion should have further room to run.

With the job market still humming, household confidence high and trade risks receding, the Federal Reserve understandably moved to the sidelines at the December policy meeting, following three rate reductions in 2018. Indeed, the median forecast of the policy-setting committee suggests that the next move in rates will be up, not down, with the first projected to come in 2021. Simply put, the Fed believes that it has engineered a soft landing for the economy with its mid-cycle downward adjustment in rates, and the stage is set for it to resume normalizing rates in coming years. That’s a heroic assumption, something that has rarely been accomplished in recent history. The three rate cuts during the slowdown in 1995 was one exception that succeeded in reinvigorating  the expansion.

But the environment has changed significantly over the past 25 years, with the spread of globalization and populist policies that embrace protectionism as a means of gaining a competitive advantage over other nations. Historically, this type of mercantilist approach to spur growth has backfired, resulting in reduced trade and higher costs for companies with global supply chains. Those disruptions are already playing out and affecting the bottom line of U.S. multinational corporations. Indeed, despite the tentative truce with China, it is unlikely that trade uncertainty among business leaders will vanish overnight, given the perception that the administration would readily change course if it is not satisfied with the behavior of trading partners. That lingering uncertainty will continue to restrain capital spending next year and heighten the downside risks to growth that may well force the Fed to cut rates once again. 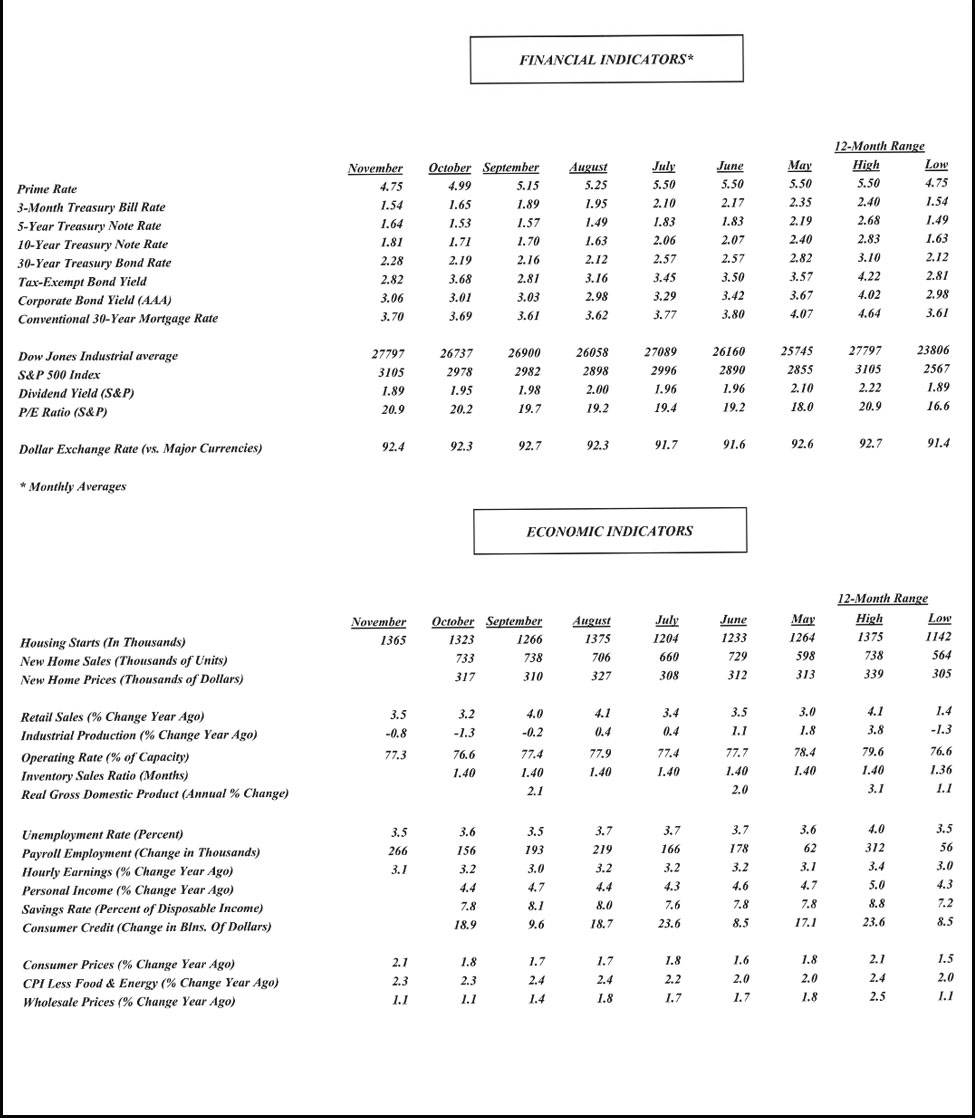