Consumers Will Be Less Feisty This Year

The economy ended 2019 with a bit more momentum than expected, as consumers ramped up spending and home construction soared to a 13- year high in December. These upbeat reports on retail sales and housing starts follow on the heels of other data that also came in on the strong side of the ledger. Most important, the job market maintained its remarkable stretch of gains, as the number of workers added to payrolls in the fourth quarter far exceeded expectations. With rising stock prices continuing to fatten 401(k) portfolios, worker paychecks growing and personal savings at elevated levels, it is small wonder that household sentiment started the year on a high note, setting the stage for consumers to keep their wallets and purses open for the foreseeable future. 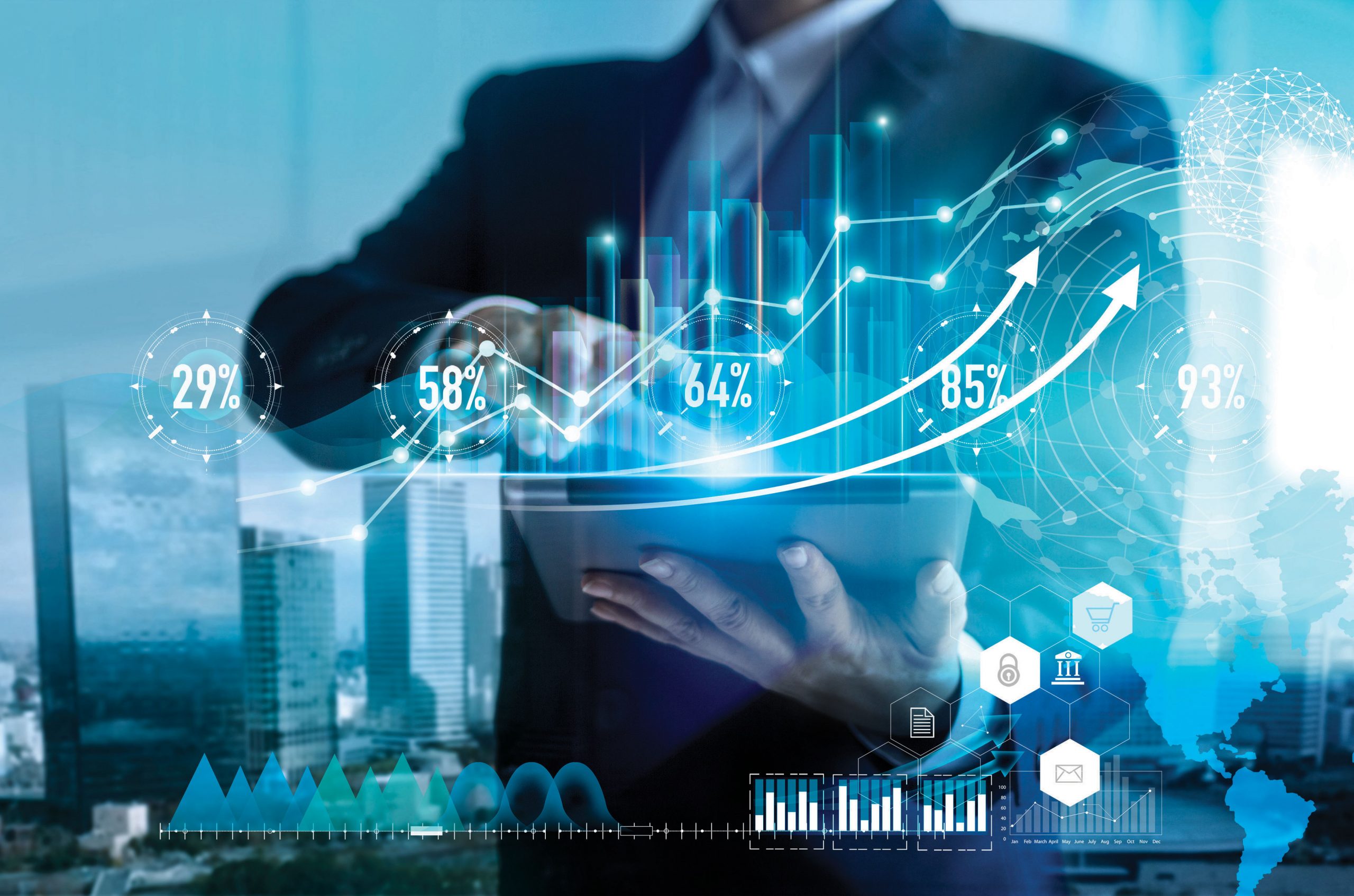 Since households are the main drivers of growth, the threat of recession appearing anytime soon should recede further into the shadows. But the late-year momentum is not likely to carry over and jump-start the economy’s growth engine into a higher gear. Nor will the much-ballyhooed phase one trade deal with China, which was formalized on January 15, provide additional fuel. At best, the pact defuses tension between the world’s two largest economies that could well have led to more serious consequences if it were to escalate into a full-fledged trade war. That’s something neither side wanted given the political as well as the economic risks involved.

But aside from igniting a stock market relief rally, the deal does little to cushion the economy from headwinds poised to restrain growth this year. Job growth is set to taper off, which will slow the growth in incomes; the boost from tax cuts en-acted in 2017 has already run its course; business leaders are still hampered by trade uncertainty, de-spite the phase one deal, and are unlikely to bring investment spending out of the doldrums; and most of our trading partners overseas are struggling, indicating weak foreign demand for American pro-ducts. Simply put, American consumers will have to do the heavy lifting to cushion the slowdown and stave off a recession. We think they have the firepower to do so and their support should guide the economy onto a soft landing in 2020. But some further rate cuts may be needed to grease the skids.

While consumer spending is the main cylinder driving the U.S. economy, accounting for roughly two-thirds of GDP, it became an even more important contributor to economic activity in 2019 than usual, particularly so late in an expansion. During the year, it accounted for more than 90 percent of the economy’s growth rate, providing a critical offset to the slump in business investment and trade. A key question as we enter the new decade is whether the U.S. consumer can continue to pull more than its weight.

To answer that question, it is first necessary to see what underpinned the consumers’ out performance last year. Front and center was the resilience of the job market, as the pace of hiring held remarkably steady in the face of global headwinds that sank confidence among business leaders. For all of 2019, the economy added a healthy 176 thousand jobs a month, including 184 thousand in the fourth quarter, driving the unemployment rate down from 4.0 percent to 3.5 percent, a rate not seen since 1969.

Although the pace of hiring slowed from 2018, when job growth averaged 223 thousand a month, it was on par with the 2017 average. But two years earlier, the jobless rate stood at 4.4 percent and companies had a much larger pool of unemployed workers to choose from. Once the unemployment rate dipped below 4.0 percent, most economist – and importantly, policy makers – thought that if employment continued to outpace the expansion of the labor force, widely estimated at about 120 thousand a month, wages would soar and ignite an inflation outbreak. As much as anything, that fear prompted the Federal Reserve to raise interest rates four times in 2018.

Of course, that fear turned out to be unfounded. The labor force had much more slack in it than anticipated, as companies were able to lure undetected workers on the sidelines back to the workforce. The intense competition for workers did raise wages – average hourly earnings rose to a peak growth rate of 3.4 percent in early 2019 from just over 2.0 percent two years earlier. Meanwhile, inflation hardly budged, remaining well below the Fed’s 2 percent target. 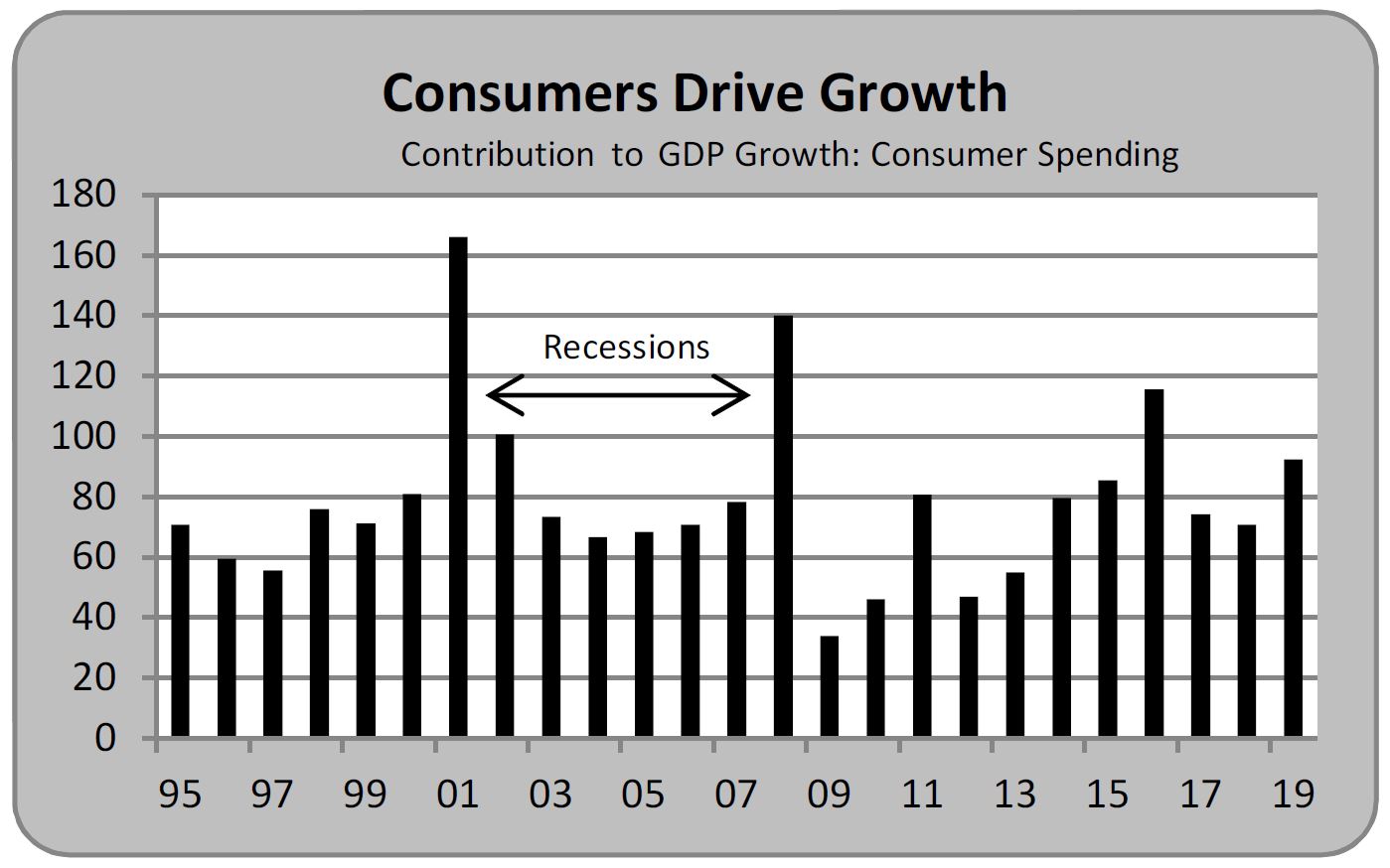 That combination of rising wages and tame inflation boosted consumers’ purchasing power. Indeed, incomes rose faster than spending, enabling households to build up savings, which rose to a seven-year high of 8.0 percent. Importantly, the rise in savings was reinforced by another year of strong asset appreciation, as both home and stock prices increased significantly. This is in marked contrast to household behavior during the previous two expansions, when strong increases in wealth encouraged households to save little out of their paychecks, driving the savings rate down to as low as 2.5 percent in the third quarter of 2005.

Given the muscular gains in wealth and incomes as well as job creation, it may come as a surprise that consumers didn’t open their spending budgets more than they did. The estimated 2.5 percent increase in real consumption expenditures last year was virtually the same as the 2.4 percent average for the expansion, even as its contribution to GDP was larger than normal.  To some extent the restraint reflected household anxiety over the trade wars as well as heightened recession fears that surfaced over the summer. Some also believe that consumers still harbor unsettling memories of the Great Recession, which is instilling a more cautious approach towards spending and savings. Hence, households are focusing more on strengthening balance sheets, building up savings and reducing debt. Debt burdens, i.e. debt servicing payments as a percent of disposable incomes, fell to their lowest levels since 1980 last year.

With healthy balance sheets, low unemployment and elevated confidence, the ingredients are in place for a sustained increase in consumer spending this year. To the extent that households held back last year because of trade policy uncertainty, the phase one deal with China should have a positive effect this year. What’s more, the Fed’s dovish shift in 2019, which included three rate cuts, reduced consumer borrowing costs, particularly for big-ticket items. Given these favorable conditions, it is hard to see consumers going into hibernation, which would certainly bring the economy to its knees.

That said, there are compelling reasons for households to restrain their spending increases this year. Just as the resilient labor market and wage increases provided heft to spending in 2019, a pullback in job growth this year should have the opposite effect. This prospect might not seem obvious given the strong gain in payrolls during last year’s fourth quarter. But that’s not likely to continue.

For one, supply restraints are about to kick in. No doubt, there is still room to run in the labor market, despite the historically low unemployment rate. But a record 111 consecutive months of job gains has drained most of the pool of available workers on the sidelines. Going forward, employment increases will be restrained by the growth in the labor force, which is estimated to run about 120 thousand a month. For another, there are already signs that the demand for workers is starting to ebb. According to the Labor Department’s latest Job Opening and Labor Turnover Survey (the so-called JOLTS report), companies posted the fewest number of job openings in November since February 2018, with the total declining 568 thousand during that month alone.

Simply put, the tailwinds boosting consumer spending still outweigh the headwinds, but the balance will be less favorable this year than in 2019. Assuming that hours worked remains the same and workers still receive pay raises at about the same 3.0 percent as last year, the slowdown in job growth indicates that income growth will also slow.

What’s more, household purchasing power received a boost from lower gasoline prices in 2019. But we expect prices at the pump to increase from an average of $2.61 last year to $2.75 this year, which means that households would spend $19 billion more on gasoline or $150 per household over the course of the year. 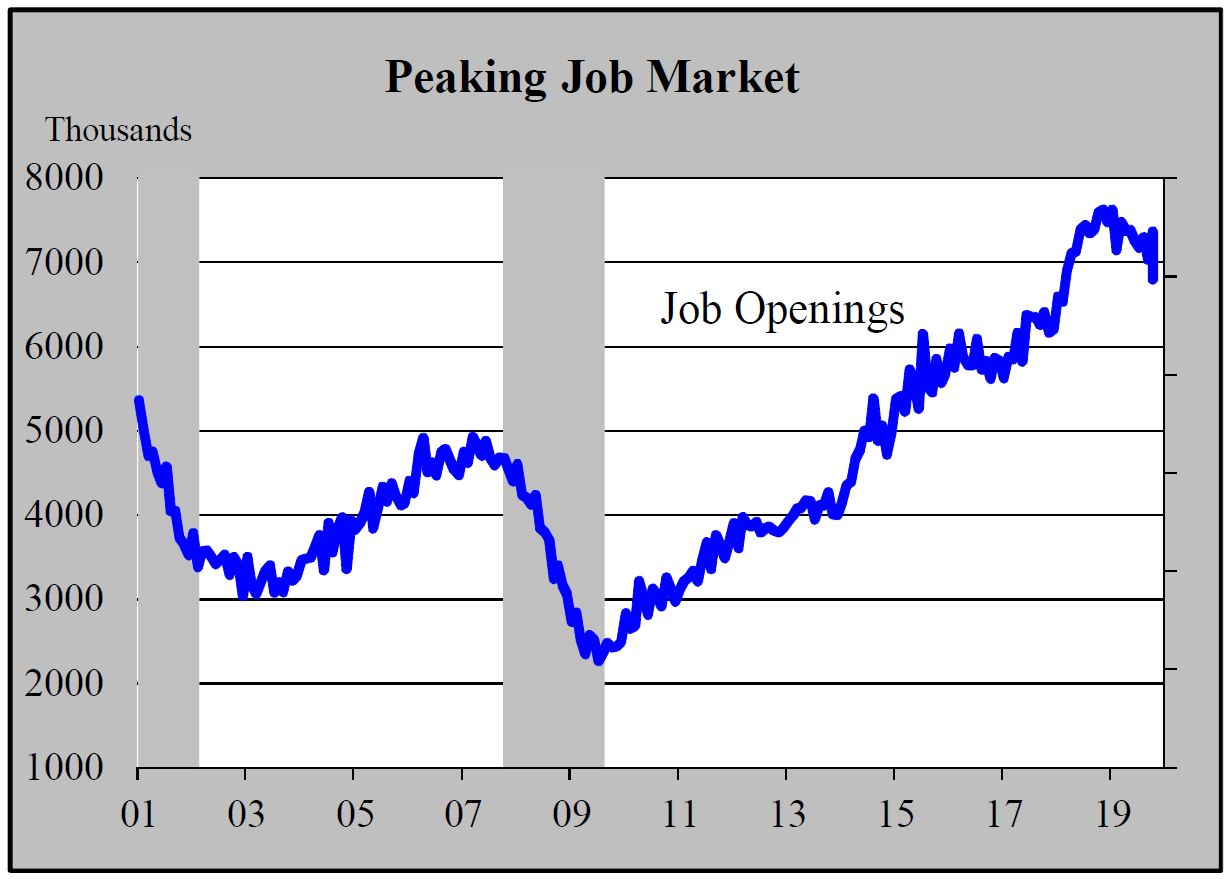 Since consumer spending is tightly linked to incomes, the slowdown in income growth this year should translate into slower consumption growth. True, households have accumulated more wealth over the past year, with stock prices up nearly 30 percent, the best performance since 2013. This should be another tailwind boosting spending. But as noted earlier, the wealth effect has had a much weaker impact on consumption than in previous expansions. Indeed, despite household wealth surging by 82 percent since the Great Recession, consumers have favored savings over spending, as the savings rate has increased by 2.3 points to around 8 percent over the past decade.

If the relationship between wealth increases and the personal savings rate that prevailed prior to the Great Recession remained in effect, the personal savings rate would currently be around 2 percent.  That, in turn, translates into $1 trillion that was withheld from the spending stream, an amount that would have turbocharged the expansion. While some believe the higher savings rate gives households the firepower to step up consumer spending over the coming year, the more likely impact is that it acts as a buffer against unexpected turbulence.

After all, if households retained a prudent approach towards spending despite record-high stock prices, solid wage growth and healthy job gains, they are not likely to turn into spendthrifts when these conditions turn less favorable, which we expect over the coming year. Nor do we expect other sources of strength to suddenly emerge and offset the slower pace of consumer spending. Housing activity is reviving, but this sector has a much smaller footprint in the economy than it had in the past. Importantly, business investment shows no sign of emerging from the doldrums, as corporate

leaders remain wary over trade policy, and rising costs combined with weak pricing power are squeezing profit margins. From our lens, the economy is heading into a sub-2 percent growth chapter of the expansion. That’s better than a sub-zero prospect, but the Fed may have more work to do to achieve that much-desired soft landing. 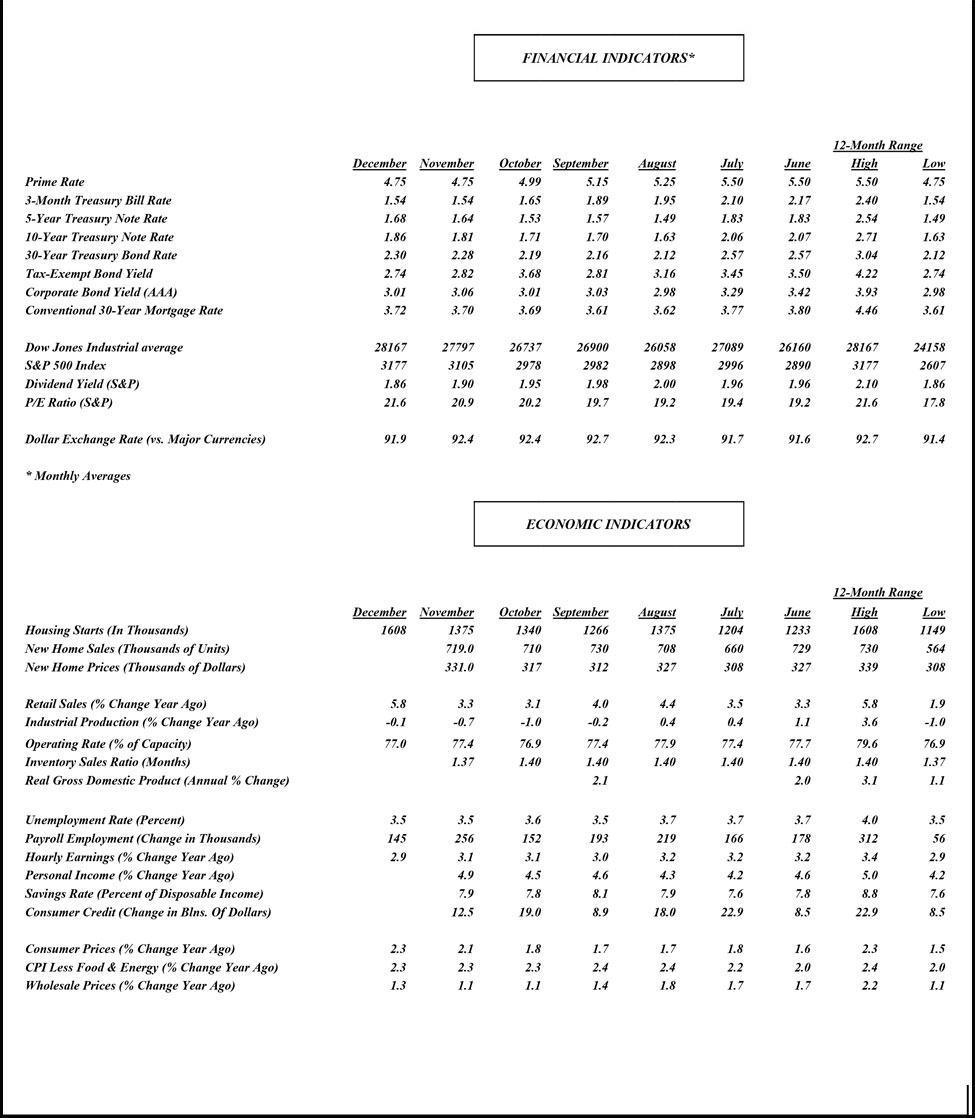