The coronavirus recession has hit the U.S. with tremendous force. Following the sizeable 4.8 percent contraction in GDP during the first quarter – putting an end to the longest expansion on record—activity is poised to plunge by a depression-like 30-40 percent annual rate in the second quarter. The downturn is taking a horrendous toll on the job market. Employers shed 22 million workers in March and April driving the unemployment rate up to almost 15 percent, the highest since the Great Depression. No part of the economy was unscathed. Even the stalwart health and education sectors saw meaningful job losses, as people avoided elective medical procedures and schools shut down.

The bleeding is set to continue through the spring, and

unemployment could eventually rise above 20 percent. Not surprisingly, policy makers have responded like never before. The Federal Reserve has pulled all stops to keep credit flowing  and bolster the functioning of the financial markets by purchasing trillions of dollars of government and private securities. Its balance sheet will balloon to over $10 trillion when all is said and done. The Treasury has been just as aggressive, injecting more than $3 trillion of stimulus into the economy. In all likelihood, the government is not done, as Congress continues to discuss additional aid proposals spurred both by the urgent need to keep the economy’s engine oiled and to calm an increasingly anxious public as national elections draw closer.

With the economy sinking into an ever-deeper hole, more than two-thirds of the states have started to relax lockdown restrictions. So far, the patchwork reopenings have met with mixed success; households have been reluctant to resume old habits owing to ongoing fears of infection and businesses that have reopened are doing so in restrained fashion, complying with social-distancing mandates. That said, the easing of restrictions is setting the stage for a gradual recovery in activity that should continue if the pandemic does not return – admittedly a big if. Hence, attention is turning to the shape of the recovery and what kind of economy will emerge on the other side.  Some fear the unintended consequences that the muscular policy-stimulating efforts will bring about. There will be some, but an inflation outbreak should not be one of them.

The economic carnage wrought by the coronavirus pandemic is still being processed by a nation that has not experienced anything so severe in generations. True, the 18-month Great Recession that ended a little over a decade ago disrupted the lives of millions of Americans. Nearly nine million jobs were lost, stoking an upsurge in bankruptcies, home foreclosures and widespread anxiety that took years to overcome. But the job destruction was spread over a 23- month period, and the worst monthly decline was 803 thousand in March 2009. Those numbers were eclipsed in March and April; indeed the 22 million two-month plunge in payrolls wiped out nearly ten years of uninterrupted job growth.

During that earlier recession, as now, a massive dose of monetary and fiscal intervention was needed to rescue the economy. At first, neither the unprecedented efforts by the Federal Reserve, including reducing interest rates to near zero and purchasing vast amounts of government securities, nor the budget-busting tax cuts and spending increases by the Federal Government met with much pushback. Not only was the economy in free fall and financial system on the verge of collapse, policy makers were also worried about a looming deflationary threat.

Once the economy gained some footing, however, sentiment started to change. Some critics warned policy makers that their turbo-charged stimulus measures were sowing the seeds of inflation. While the Fed resisted these warnings, they did carry increasing weight on Capitol Hill. Within two years after the recession ended, legislators put restraints on the budget well before most economists believed was justified. Some commentators are now raising the same cautionary flags, comparing the current “war on the coronavirus” with past military conflicts that stoked inflation outbreaks. Ironically, these concerns are surfacing even as inflation is dramatically slowing, with core consumer prices registering the largest drop on record in April.

Following four rounds of fiscal stimulus amounting to more than $3 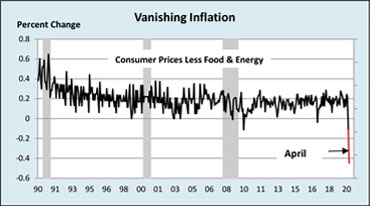 trillion, the House of Representatives introduced another aid package on May 13 that would double the fiscal support already unleashed to combat the health and economic effects of the Covid-19 pandemic. The proposal was summarily rejected by Senate leaders, who essentially claim that enough is enough at least until the impact of previous efforts is assessed. To be sure, the more conservative Senate legislators are naturally inclined to resist fiscal intervention as they historically fear the ever-increasing encroachment of Government in the economy. While they recognize Washington needs to play a greater role to combat the virus, they fear that “big government” will remain after the health crisis is over.

Aside from their philosophical resistance to big government, these policymakers have another reason to push back against more fiscal stimulus. Simply put, they – as well as many private economists – fear that once the health crisis ends, the massive pump-priming efforts employed to jump-start the economy’s engine will also stoke a virulent inflation outbreak when growth resumes. While some always fear that result whenever expansionary policies are put into effect, they have far more ammunition to back their claim this time.

For one, the Fed is injecting liquidity into the financial system and economy like never before. Not only is it providing loans to the private sector, purchasing corporate bonds, as well as to state and local governments, for the first time ever, it stands ready to do “whatever it takes” to keep the economy from falling into another Great Depression. To that end, it is virtually underwriting the bloated government deficit, acquiring $6.7  trillion  of Treasury debt. Fed Chair Powell has asserted that there is no upper limit to future purchases, which is likely to soar to over $10 trillion. Meanwhile, the  unprecedented  Treasury borrowing to finance  relief efforts will drive government debt to over 100 percent of GDP for the first time since World War 11. As much as anything, inflation hawks have historically worried that such a huge amount of national borrowing and debt will eventually cause the economy to overheat and ignite the inflation fires.

Of course, the  warnings from inflation hawks during the Great Recession never came to pass. Although the central bank kept its short-term policy rate near zero for seven years and only raised it to a peak of 2.5% in 2018, inflation never rose to the Fed’s 2 percent target on a sustained basis. Indeed, the inflation shortfall is even more striking given that the economy embarked on a record-long expansion and unemployment fell to a post-war low of 3.5 percent. 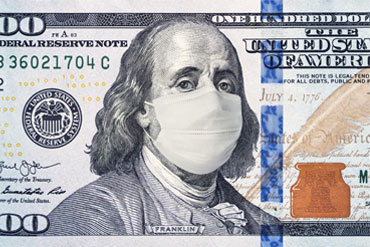 The mistake that inflation worriers made after the Great Recession as well as now is that they are comparing the current war on the coronavirus with previous war-time episodes. In the aftermath of World Wars 1 and 11, inflation did spike  temporarily reflecting pent-up spending that followed years of wartime rationing. Simply put, the postwar environment featured the classic drivers of inflation, namely too much money chasing too-few goods. Once the restrictions on output were lifted and wartime production shifted to meet the pent-up civilian demand – i.e. once supply caught up with demand – inflation subsided and thereafter followed normal cyclical patterns.

But the current war is entirely different, as we are battling both supply and demand shocks of unprecedented proportions. Initially, the shock came from the supply side, as the ability of U.S. companies to import vital parts and materials needed to generate output was disrupted by the shutdown of producers overseas where the virus originated. That supply-chain disruption soon morphed into a demand shock when the coronavirus spread from China to the U.S., prompting government lockdown restrictions on businesses and households. With shelter-in-place orders in full swing and 22 million workers laid off in the space of two months, demand swiftly collapsed more rapidly than supply.

The Least of Worries

Not surprisingly, the restraint on inflation that was already present before the pandemic struck has gotten even more intense as the economy collapsed. As noted, inflation never gained traction following the Great Recession when the economy contracted by 4.0 percent from peak to trough. We expect the contraction this time to be about three times as large. That’s a huge hole to climb out of; even assuming that growth resumes in the third quarter most economists estimate that it will take at least a year for the economy to return to its pre-recession size.

In this prospective environment, it is hard to see companies 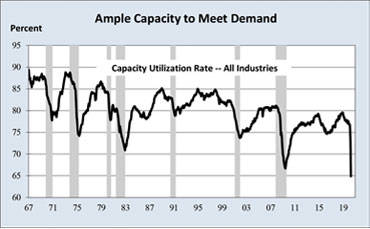 regaining any pricing power in the near future. Thanks to the gargantuan drop in production in April, industrial firms have more spare capacity than anytime on record, going back to 1967. Under these circumstances, there is considerable pressure to keep prices as low as possible to stimulate demand and, hence, production as fast as possible. Nor will there be any pressure from labor costs. The May jobs report will likely show that for the first time since the 1940s, the majority of Americans will not be employed. With the unemployment rate heading towards 20 percent if not higher, workers will be in a weakened bargaining position to demand higher wages.

Simply put, rather than stoke an inflation outbreak, the massive government stimulus efforts will just barely fill a deep hole created by the coronavirus pandemic. Keep in mind that while the dollar amounts, $3 trillion as of late May, roughly equals the expected drop in GDP, only a fraction of the fiscal aid will go directly into the spending stream. The government is not building roads and bridges or  hiring workers and paying salaries; most is aimed at replacing lost incomes from job losses, which may or may not be spent. Likewise, the Federal Reserve does not spend money; it can only encourage borrowing by keeping interest rates low. But households turned cautious even before the virus reached peak intensity, boosting the savings rate to a 40-year high of 13.1 percent in March, and persistent fears of infection — at least until a vaccine is found — will restrain spending. Inflation will be the least of the problems facing the economy for some time. 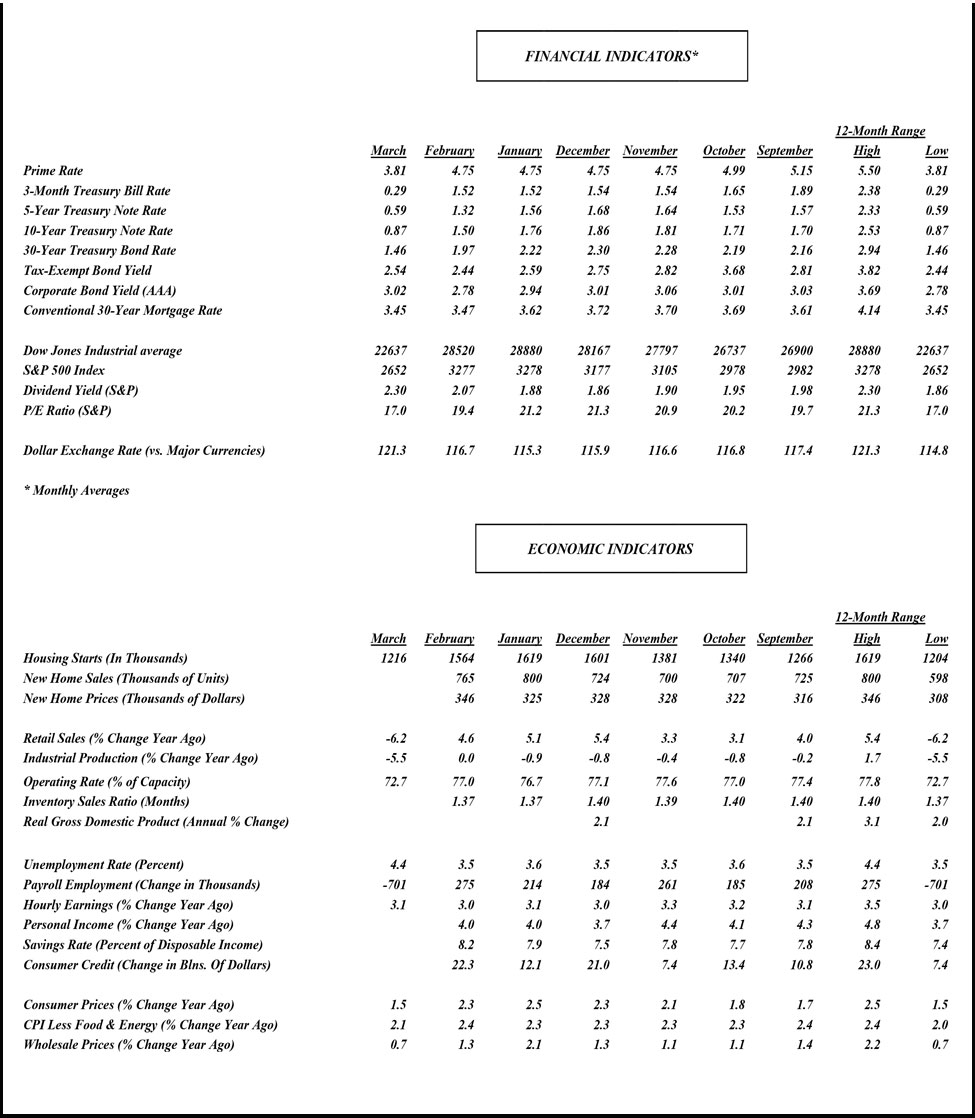