Coming Back to Life

The healing process has begun. With important economic data for May now in the books, it looks like the economy hit bottom in April. Not only have most economic indicators rebounded in May, they have come back much more strongly than expected on Wall Street. That together with some promising signs on the health front and muscular support from the Federal Reserve stoked an astonishing rally in the stock market. After a debilitating 34 percent drop between February 19 and March 23, stock prices staged a record-setting 45 percent surge over the subsequent 50 days. As of late June, the S&P 500 stood just 7 percent below its pre-coronavirus record set in February.

Time will tell if the euphoria on Wall Street is justified. Although the 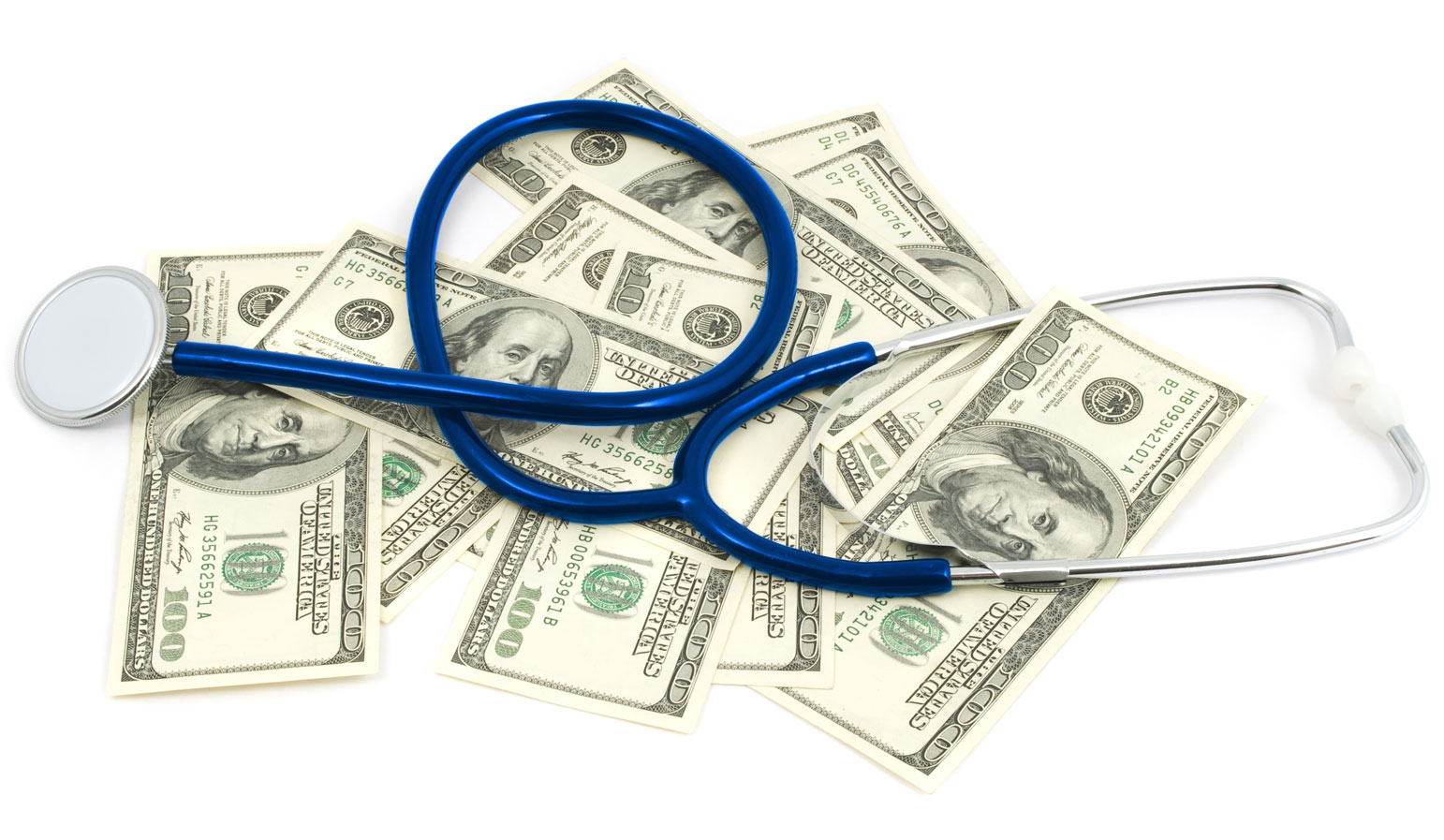 economy is on the mend, it remains firmly ensconced in recession territory. If there were any doubt that the U.S. entered a recession, the National Bureau of Economic Research put it to rest on June 9 when it announced that the longest expansion in U.S. history officially ended in February. In a testament to the unique nature of this recession, the NBER made the call just  three months after its onset, much shorter than the usual wait of nine months to a year. Traditionally, recessions last at least two quarters but the NBER judged that the magnitude of the contraction in employment and production along with its breadth justified the “recession” label “even if it turns out to be briefer than earlier contractions.”

At this juncture, it appears that this recession will turn out to be one of the shortest on record, lasting not more than a quarter or so. If the recent recovery seen in most data holds, the third quarter should mark the start of the next upturn. What’s more, the growth rate during the period should be impressive, with estimates ranging as high as 30 percent. But before uncorking the champagne, it is important to put the rebound in context. Against the plunge in activity in the second quarter – which likely ranged between an annual rate of 30 to 40 percent – the economy would still be 7.0 percent smaller than it was prior to the pandemic. What’s more, the sizzling third quarter rebound may well fizzle later in the year as the effects from government stimulus fades and particularly if a second wave of infections hits. Simply put, it will be a long slog before the economy returns to normal levels of activity; the question is, will it follow  straight line up or encounter detours along the way?

TAs the phased lifting of lockdown restrictions spreads from state to state, the economy is coming back to life with a bang. Businesses rehired workers at a record pace in May, expanding payrolls by an eye-opening 2.5 million. That was a shocking surprise to economists who widely believed that the 23 million job losses in March and April would be followed by another monthly decline in May. They received another shock when retailers reported a record 17.7 percent jump in sales for the same month, more than double the expectation on Wall Street. To put this in context; the previous record increase for a month was 6.7 percent back in October 2001.

Some believe that the vigorous rebound in these key economic reports means that the economy is off to the races, leaving unpleasant memories of the Covid-19 recession in the dust. To them, a V-shaped recovery in which the economy swiftly regains all the huge losses suffered during second quarter is firmly underway. As tempting as that prospect seems at the moment, we remain highly skeptical that it will play out as hoped. Forget for the moment that one-month does not make a trend.

The more important caveat is that these outsized gains are coming off extremely low bases, thanks to the breathtaking plunge in economic activity that took place in previous months. A better way to gauge the rebound in jobs and retail sales is to see where they stand relative to where they were prior to the pandemic. In both cases, there is still a huge mountain to climb.  For example, if the 2.5 million increase in payrolls were to repeated month after month, it would still take close to a year to regain all of the loss seen in March and April. Likewise for retail sales, which remains a full 8.0 percent below the pre-crisis level in February.

The Easy Part is Now

Put another way, the initial stage of a recovery is always the easy 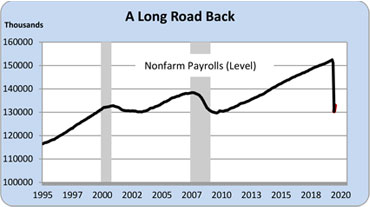 lifting part. It also generates the most optimism because the rebound in economic activity is usually the strongest, leading many to expect the gains to continue at the same rate. That’s rarely the case. In the current instance, two forces – one that typically occurs early in an upturn and another that is unique to this cycle – powered the initial spurt in activity. Even the typical catalyst was unusual in certain respects.

Typically the economy gets a healthy early boost from the unleashing of pent-up demand. Depending on the depth and length of the recession, households postpone nonessential  spending during downturns, due either to a lost job or the fear of losing one. They will continue to prioritize essential expenses – food, rent, mortgage payments and medical services, for example – but postpone discretionary purchases on such things as a motor vehicle, TV or other appliances as well as recreational services, creating a pent-up demand for these items. Instead, the monies not spent goes into savings accounts, ready to be unleashed when the recession ends.

Not only did that dynamic play out in May, it did so in spades. That’s because the sudden stop in all forms of activity brought on by Covid-19 lockdown restrictions resulted in a record contraction in consumer spending, generating an even greater volume of pent-up demand than is customary in downturns. Unlike previous recessions, however, households in the aggregate suffered no loss of incomes when the job market turned south, thanks to the unprecedented support from the government. Indeed, the $3 trillion in government transfer payments to households in the form of $1200 stimulus checks and expanded un-employment benefits were more than three times greater than the decline in wages and salaries in April. Most of these excess funds were initially channeled into savings accounts, driving the savings rate up to a record 33 percent. Hence, households had more than enough firepower to finance their pent-up demands in May, underscoring the surge in retail sales that month.

Consumers still have fuel in the tank to support a decent amount of spending over the early part of the summer. The expanded unemployment benefits, which adds $600 a week to standard state benefits and covers workers who previously did not qualify for regular benefits, are set to continue through the end of July. According to numerous estimates, about two-thirds of workers eligible to receive unemployment benefits are actually receiving more income than they were getting in their jobs.

Hence, there is still an enormous amount of purchasing power in the economy, even as the unemployment rate remains at depression-era levels. As lockdown restrictions continue to ease in a broader swath of states, the supply of goods and services that consumers can purchase will also expand, lending breadth as well as depth to spending over the near term. And as businesses reopen and rehire laid-off workers, paychecks will also be coming back, supporting income growth.

All of this will give heft to the economy’s third quarter performance, which should see a record increase in GDP. But that’s when the easy lifting ends and the hard part begins. Indeed, some spending firepower has already been exhausted, as the stimulus checks sent directly to households earlier in the spring have probably been spent, particularly by lower-income recipients to cover essential expenses. By the end of July, the program that provides expanded unemployment benefits is also set to end; at this juncture, there is not broad support in Congress to extend it. Indeed, a vocal group of conservative lawmakers view the recent strength in economic activity as an argument to withdraw stimulus from the economy to stem the ballooning deficit.

The biggest risk to the outlook over the next six months is the prospect that a second wave of the virus will emerge. If it does, the economic impact will depend on a variety of factors. One risk is that policymakers would be reluctant to reimpose restrictions due to lockdown fatigue among the public. Doing so might also be perceived as a tacit admission that the government had previously made mistakes. But failure to respond to a sustained rise in case numbers could trigger more severe lockdown restrictions to contain the virus down the road. Nor would a weak or delayed government response provide much of a growth boost if it leads to a sharp rise in voluntary social distancing.

In this regard, concerns are growing that cases in more than half the 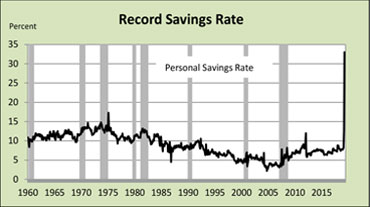 states have started to rise again, suggesting a second wave is coming. At this stage, the true significance of increases is hard to know – and in any case is perhaps better left to epidemiologists to assess. Most health officials believe that the rise in cases is not the start of a second wave, but rather a failure to ever contain the original spread of Covid-19. Complicating matters even more is that the sharpest upticks in cases are occurring among the states that were the earliest to lift restrictions, which has ominous implications as the trend towards reopening all states  continues to gain traction.

In any event, a resurgence of the virus clearly has the capacity to undermine the recovery, prompting businesses to shut down anew and spurring households into another quarantine, either voluntarily or by government mandate.  Even if a second wave is not forthcoming, the scars from Covid-19 will change the behavior of consumers. The imperative to stay safe will supersede the desire to satisfy material needs, restraining spending below where it otherwise would be. Until a vaccine or effective treatment becomes widely available, it is not likely that people will resume normal activities. That includes businesses many of which are accelerating a push to do more with less workers. Walmart, for example, is testing a new payment system that allows it to eliminate all cashiers. Put simply, as the doors of the economy continue to reopen the road back to normalcy will be long and winding.