The Uneven Impact of Covid-19

Just as government-mandated lockdowns sent the economy into a tailspin in March and April, the lifting of restrictions and the reopening of businesses propelled activity higher in May and June. In fact, the rebound in jobs, spending and other key indicators has been stronger than expected. But that initial growth spurt is in danger of sputtering out, as the resurgence of the coronavirus in the majority of states is prompting governments to either reimpose social-distancing restrictions or delay the reopening process. The response has been uneven and politically charged, but it has cast a dark cloud over the economic outlook.

Hence, before the economy’s growth engine could return to full 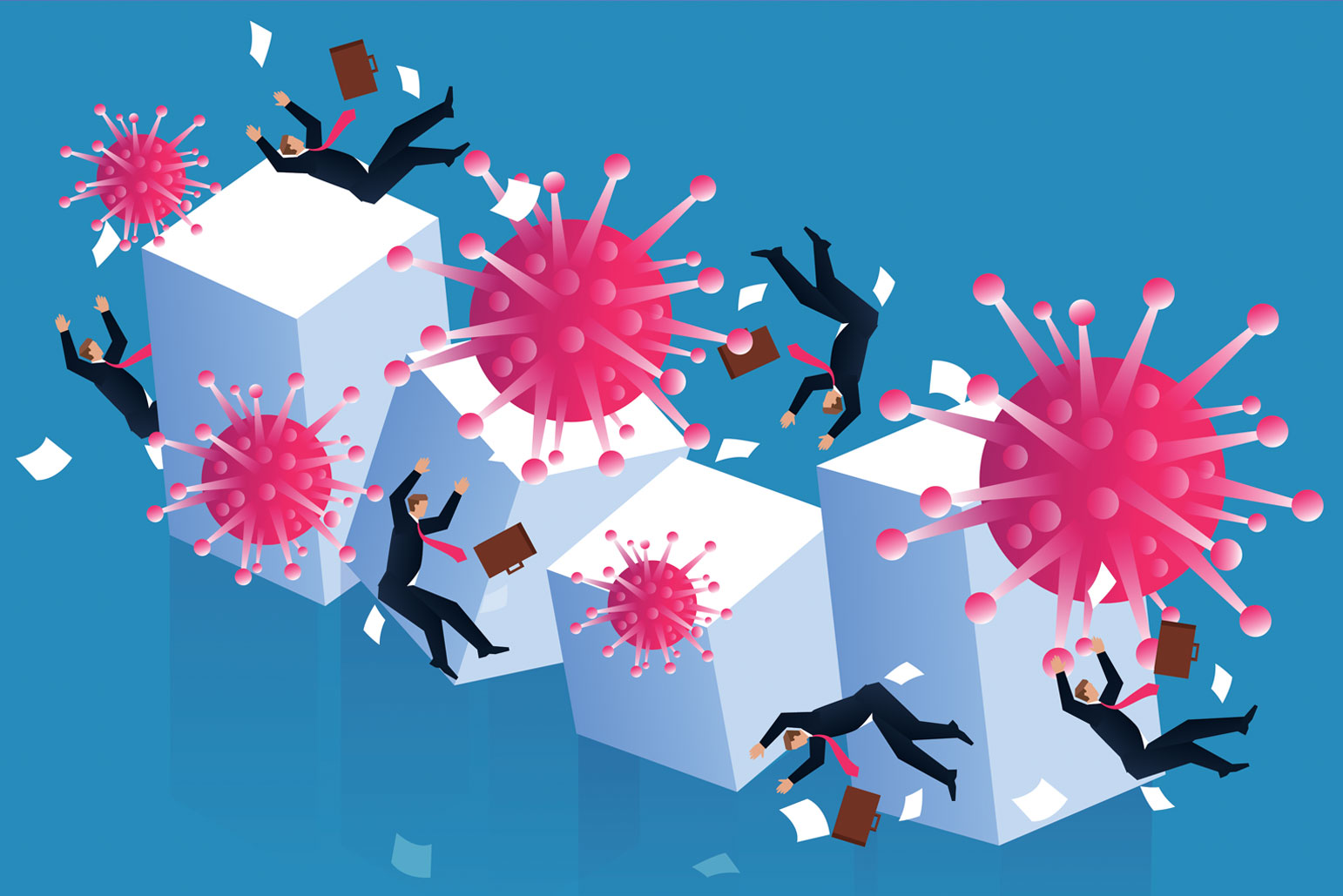 speed, governments are keeping their collective foot on the brake, with some applying more pressure than others. The effects are already being felt. A broad swath of restaurants and bars cannot reopen their doors and are forced instead to accommodate diners with outdoor seating, using fewer waiters and other staff than they normally would. Companies, both large and small, are dropping plans to rehire all furloughed workers, calling back a smaller fraction than hoped. A month ago, most of those workers expected to be rehired; now more than half of them do not. Worse, the recession has taken a disproportionate toll on low-paid workers who only recently started to reap the rewards of the pre-pandemic tightening of the labor market. Those workers are once again on the front lines in the war against the virus.

The longer this depressing pandemic effect is stretched out, the greater the odds that temporary layoffs will morph into permanent ones, which erodes worker skills and loosens their contact with the workforce. A raft of anecdotal evidence indicates that the May/June burst of activity has already faded and the economy lost momentum heading into the third quarter. Some already fear a double-dip recession, implying that the economy will contract again later this year. We are not there yet, but caution that more government relief, particularly for households and state and local governments will be needed to keep the economy afloat.

The Toll on Low-Income Workers

The Covid-19 recession, like any recession, is a national tragedy. But this one has had particularly dire consequences for lower-paid workers. In contrast, previous recessions had taken a disproportionate toll on middle-and high-income workers. The reason: earlier downturns were paced by goods-producing sectors of the economy, which generate the discretionary big-ticket purchases – such as autos, housing-related appliances as well as homes themselves – that consumers are quick to postpone during times of adversity. The earnings of workers in these sectors, primarily manufacturing and construction, fall in the mid to higher end of the wage scale.

But in this recession, services led the way down, reflecting the outsized impact that lockdown restrictions and social distancing mandates have had on service-providing firms. Workers in services tend to be lower-paid, as a large pro-portion have less education and/or fewer skills than those in the goods-producing sectors. Hence, the three-hardest hit industries between February and April, when private payrolls contracted by 22 million, were: clothing stores (cashiers, customer service representatives, salespersons, etc.); amusement, gambling and recreation services (recreation attendants, fitness trainers, bartenders, wait staff, etc.); and personal and laundry services (hairdressing, dry cleaning and pet care, etc.).

In all, more than half of the private sector jobs lost between February and April (56%) came from the lowest paying group of industries, while the middle- and higher-paying groups accounted for 28% and 16% of the remaining loss, respectively. In the three hardest-hit groups noted above, between 55% and 60% of workers were laid off. The dispiriting aspect of this uneven toll on workers is that low-wage workers were finally reaping the rewards of the longest expansion and tightest labor market on record, as formerly unemployable and other marginal workers that had long languished on the sidelines were brought into the workforce. Sadly, they were victimized by the old adage, “last in, first out”, as they comprised the most disposable segment of the workforce.

The Good, Bad and Ugly 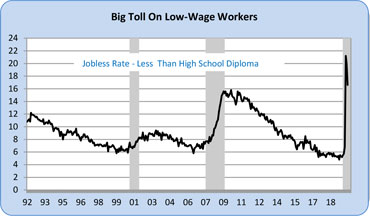 and June mirrored the trajectory of the February-April jobs collapse. Simply put, the low-wage industries led the way back, a not surprising response to the lifting of lockdown restrictions that enabled the hard-hit service-providing sectors to reopen for business. While workers in these industries accounted for 56 percent of the job losses, they comprised 63 percent of the job gains in May and June. Workers in the hospitality, restaurant and retail sectors were the biggest gainers.

The bad news is that low-paid workers continue to be the most afflicted by the recession, despite their big job gains in May and June. For example, employment in the low-paid group of industries is still down 16.1 percent compared to its peak in February, nearly twice that for middle-paid industries (-9.2 %) and over three times more than in highest-paid industries (-5.4%). And while the unemployment rate among low-paid service workers has receded markedly, many sectors in this group still display depression-like rates. For instance, joblessness in the arts, entertainment and recreation industry has declined by a full 10 percentage points, but still remains extremely elevated at 37.3 percent.

Overall, the bigger picture is anything but bright. Although jobs increased by a record-breaking 7.5 million in May and June, they are still down by nearly 15 million since February. That’s a big hill to climb. What’s more, about 7 million workers in the lowest-paid industries are still without jobs. Importantly, since they only recently started to benefit from the tight job market prior to the pandemic, there was little time to build up a financial buffer to weather a long spell of joblessness. Nor are low-skilled workers getting much relief on the pay front, as they have also suffered a much sharper slowdown in pay growth in recent months than other workers.

While white-collar workers have been relatively less affected by the pandemic, they are hardly off the hook. One group that is particularly vulnerable are state and local government workers, whose wages and salaries are more than 30 percent higher than the average for private sector workers. 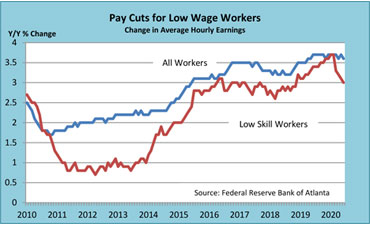 When benefits are included, their excess compensation rises to almost 50 percent. But state and local governments have been deeply affected by the coronavirus pandemic, as the sudden stop in all forms of commerce has pummeled tax revenues. Not only are income and sales tax revenues plunging, the pressure on spending related to the recession and the coronavirus is building.

That combination is producing a mountain of red ink that state and local governments have to correct because most are required by law to maintain balanced budgets. Hence, legislators are already making painful cuts in purchases and are downsizing their work force.

Indeed, state and local jobs have fallen by 1.5 million since February, with education accounting for two-thirds of the decline. In addition to the downsizing of government payrolls, cuts in state and local budgets will depress employment by contractors or firms that receive government grants.

Government Needs to Step Up

As of this writing, Congress is deliberating over the size and scope of another fiscal package to counter the effects of the coronavirus. The initial resistance to more stimulus has weakened in the face of a resurgence of the virus and renewed lock-down restrictions in a growing number of states, which threatens to stifle the recovery before it gains traction. Odds are, a fourth round of fiscal relief since the onset of the virus will be forthcoming, although its timing and composition are still up in the air.

From our lens, aid to state and local governments as well as some 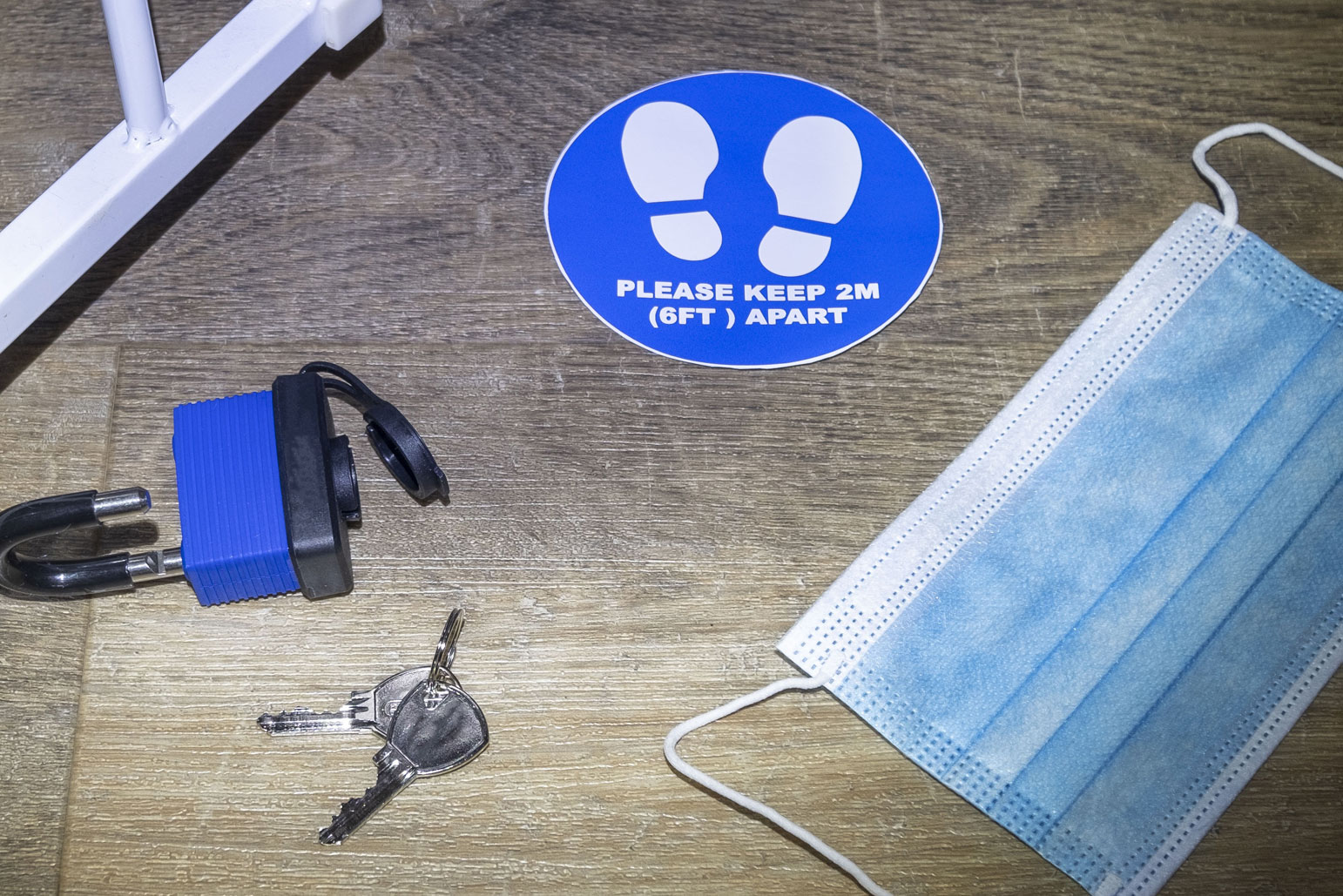 income relief to individuals are vitally needed to sustain the recovery. To be sure, both are contentious issues in Congress, as some legislators are disinclined to help states that they believe have mismanaged their budgets prior to the pandemic and should not be bailed out with taxpayer money. There may or may not be some truth to that objection. However, it is important to remember that the drag from state and local governments following the Great Recession due to tepid Federal support was an important reason the recovery was the weakest of the post-war upturns. The toll on governments from the pandemic is far greater than it was then, and the after-shocks will reverberate far longer.

Likewise, some legislators believe that providing generous unemployment relief to individuals would diminish work incentives, particularly since many recipients are receiving more in benefits than they earned on their jobs under the enhanced unemployment program set to expire at the end of July. But those benefits were the main reason consumer spending rebounded sharply in May and June despite the massive loss of jobs due to the pandemic. With 15 million workers thrown out of work due to the pandemic recession and a staggering unemployment rate of 11 percent, the income loss from withdrawn benefits would pull the rug out of spending and possibly derail the recovery. What’s more, businesses are already posting fewer job listings and the surge in returning workers in May and June belies the notion that they would prefer to stay away and collect benefits. The challenge going forward is to keep demand up and provide businesses with incentives to rehire the army of unemployed workers. 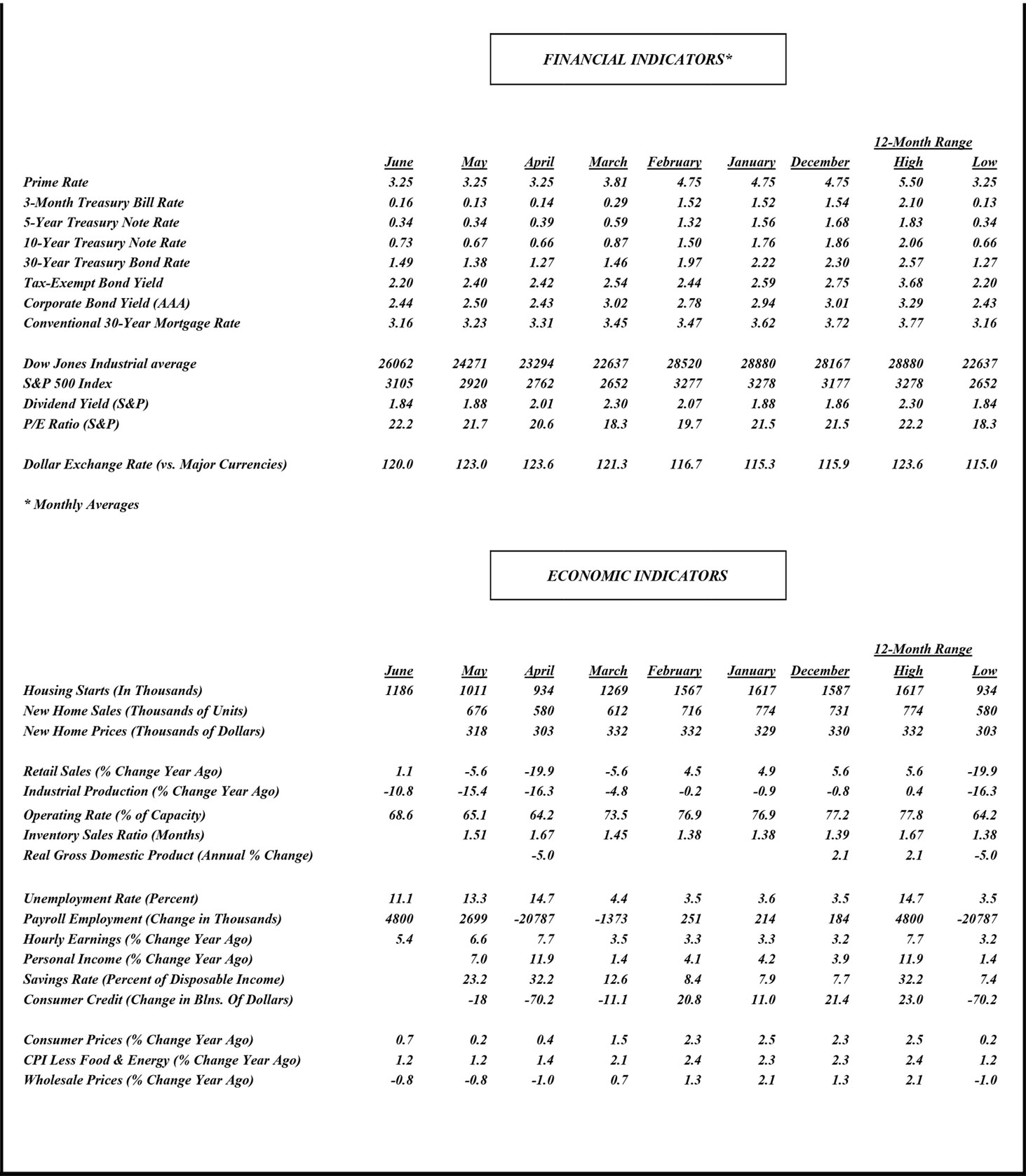