The rebound in jobs, production and consumer spending in recent months strongly indicates that the recovery from the harsh Covid-19 recession is underway. To be sure, the recovery may be cut short if the escalation of virus cases in many parts of the nation turns into a full-blown second wave or if the lapsed fiscal relief is not replenished with some additional government aid in coming weeks. The vigorous rebound in key economic measures give the false impression that the economy is healthy enough to stand on its own two feet. It is not. The fuel for the growth engine is running out and it is only a matter of time before its cylinders begin to misfire as long as the health crisis is not effectively dealt with.

Because the shutdown of businesses across the nation sent the economy into a death-defying plunge – a record annual rate of 32.9 percent in GDP – in the second quarter, the low base from which the rebound is launched makes it look stronger than it feels. As impressive as the third quarter growth rate will turn out to be, it will fall far short of making up the recession losses. Hence, despite a record 9.2 million increase in jobs over the past three months, there are still almost 13 million fewer workers collecting paychecks than was the case in February. The unemployment rate, while down from a record 14.7 percent in March, is still at 10.2 percent higher than it was during the peak of the Great Recession.

In contrast, the stock market has enjoyed the V-shaped recovery that the administration and some other optimistic forecasters thought the economy would follow. As of mid-August, the S&P 500 stock index recovered its entire 34 percent nosedive from February 19 to March 23, hitting a new high on August 18. The speed of the market recovery has been breathtaking. It only took about 6 months for the S&P 500 to return to its prior record highs, compared to more than 7 and 5 years following the last two economic recessions.  Simply put, the Federal Reserve’s turbo-charged easy policy that drove interest rates down to historic lows ignited a fire under stocks, but Main Street has yet to respond in kind. For the latter to happen, fiscal policy will need to replenish its stimulus and Americans will need to feel confident that the pandemic is under control.

For many years prior to the onset of Covid-19, the widening disparity of income and wealth has been an ever-growing issue in the U.S. as well as in other advanced economies. Many causes have contributed to this unsettling trend, including most notably skill-based technological changes and weakened trade unions. But pandemics can both trigger and exacerbate it. Although each incident contributes in its own way, they all share some common elements.

For one, pandemics damage confidence in using in-person services, which disproportionately exposes low-skilled workers to displacement. A unique feature of the current pandemic is that the ability to work from home is proving to be a key factor underscoring the mix of job losses; those that can work from home are more likely to retain a job and they usually are in higher paid positions. Indeed, job losses among the more poorly educated (and therefore likely least well paid) have been greater both during this recession and the 2008-2009 global financial crisis.

Not coincidentally, the Federal Reserve has responded more aggressively to the last two recessions than earlier ones, sending interest rates dramatically lower. The Fed’s short-term policy rate has been at or near zero in seven of the past ten years and never rose above 2.5 percent at any time during the period. With rates so low, investors sought out riskier assets to obtain higher returns, sending stock prices on to an unprecedented rally that greatly enhanced the wealth of shareholders. Since wealthier individuals hold the vast majority of stocks, their net worth grew exponentially, thus exacerbating the wealth divide among the population.

Typically recessions also amplify inequality in incomes and consumption as well as in wealth. True, the U.S. has a safety net that kicks in during downturns. These so-called automatic stabilizers help mitigate the suffering of laid-off workers, providing unemployment benefits and other forms of government relief that offsets some of the lost wages. But the transfer payments hardly make up for the lost income, and the squeeze on household budgets takes a toll on spending. What’s more, the layoffs during recession usually fall more heavily on lower-paid workers who have little in the way of savings. Hence, the loss of wages translates almost dollar for dollar in spending cuts. 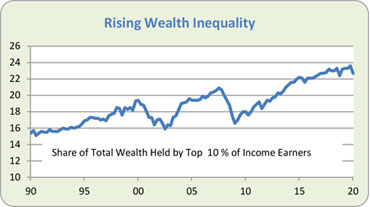 That has not been the case in the current recession. The $3.2 trillion CARES Act passed by Congress in March provided a full replacement of income and then some. The legislation’s $600 supplement to regular unemployment benefits and the direct payment of up to $1200 to most households not only offset the loss of wages, it inflated personal incomes more than if there were no recession. Indeed, personal incomes staged the sharpest year over year increase in the second quarter since the early 1980s. What’s more, households in the lowest 25 percentile of the income ladder actually saw their incomes increase by 87 percent over their pre-pandemic level.

As a result, consumption patterns also changed dramatically from past recessions. Yes, total consumption fell sharply during the second quarter and, given its outsize influence on the economy, was the main reason GDP tumbled so dramatically. But it wasn’t the falloff in demand that stifled spending as much as the cutoff in supply, owing to the lockdown restrictions the shuttered businesses throughout the nation. Interestingly, the fall in spending was much greater for the high-income groups, which tend to spend more on services – i.e., restaurants, bars, theaters, etc.—that came under the greatest restraints from the lockdown restrictions.

Clearly, if not for the substantial fiscal relief that the CARES act 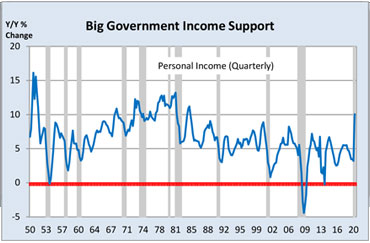 provided, the pandemic recession would have been considerably worse. And while the Federal Reserve’s aggressive zero-interest policy helped drive stock prices to record highs in record time from a bear market, it also established emergency lending programs that propped up activity on Main Street. One sector that has particularly thrived from the Fed’s efforts is the housing market, where demand for new homes has soared and construction activity has roared back to pre-pandemic levels.

But the economy is now coming down from the sugar high generated by these policy moves and the recovery is entering a slower, perilous stage. For one, the pandemic has become more firmly embedded in the mind-set of Americans, altering their behavior in ways that will endure over the foreseeable future.  Until a vaccine is found and widely distributed, fears of infection will prompt people to voluntarily abide by social distancing practices, which bodes ill for the prospects of industries that rely on in-person shopping.

This altered behavior is taking a big toll on brick and mortar establishments, particularly mom and pop stores that have seen foot traffic vanish and are not equipped to take advantage of online sales. More broadly, conditions will not be the same for the entertainment industry, travel and tourism as well as other forms of commerce that are likely to be victims of modified behavior that conform to social-distancing norms. Importantly, demographic forces are contributing more to this trend than was the case following previous external shocks. Simply put, an aging population means that a broader swath of the nation is more vulnerable to the effects of Covid-19.

With Congress in recess until after Labor Day (unless called back into session by party leaders), the impasse over a new fiscal package remains very much in place. This has not discouraged investors in the stock market, who remain optimistic that a deal will be struck and the recovery will remain on track. We concur with that assessment, but caution that some damage has already been done and the upturn will not be smooth and steady.

With the expiration of the $600 supplement to unemployment benefits on July 31, households are already feeling the pinch. The vigorous rebound in personal consumption in May and June was fueled by the supplement as well as the $1200 stimulus checks received in April. Those funds have been spent and shopping activity is starting to fade. What’s more, the resurgence of virus cases in several states has prodded local governments to reimpose lockdown restrictions or delay the reopening of some businesses. Most school systems are relying on remote learning at least part of the time, which has curtailed the normal back-to-school shopping season, normally one of the most bustling periods of the year. 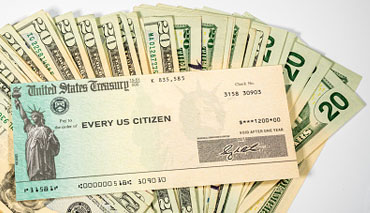 Reflecting the fading impact of the government stimulus and the expiration of the Payroll Protection Program, businesses are scaling back hiring. More important, workers are turning more anxious about their job security. A new survey (by JQI-Cornell-RIWI) shows that a second round of layoffs is underway: 31 percent of rehired workers were laid off again in July/August and another 26 percent were told that they could be laid off. Significantly, the survey notes that… “The repeat layoffs seem to not be directly related to resurgence of the COVID-19 virus, but are rather linked to overall economic conditions in the US and – likely – the exhaustion of the PPP funds”. This confirms one of the biggest fears of policy makers, namely that the massive wave of temporary layoffs seen when the pandemic struck the U.S. in March and April could morph into permanent job losses.

At the very least, it looks like the economy hit an air pocket in August, owing to the impasse in Washington over new fiscal relief. That, in turn, is stoking job uncertainty and spurring households to build up precautionary savings to guard against future layoffs. Let’s hope that the impasse is temporary and a formidable package is cobbled together in a timely fashion. As the election draws closer, the challenge of reaching a compromise in a highly polarized environment will become ever-more difficult. 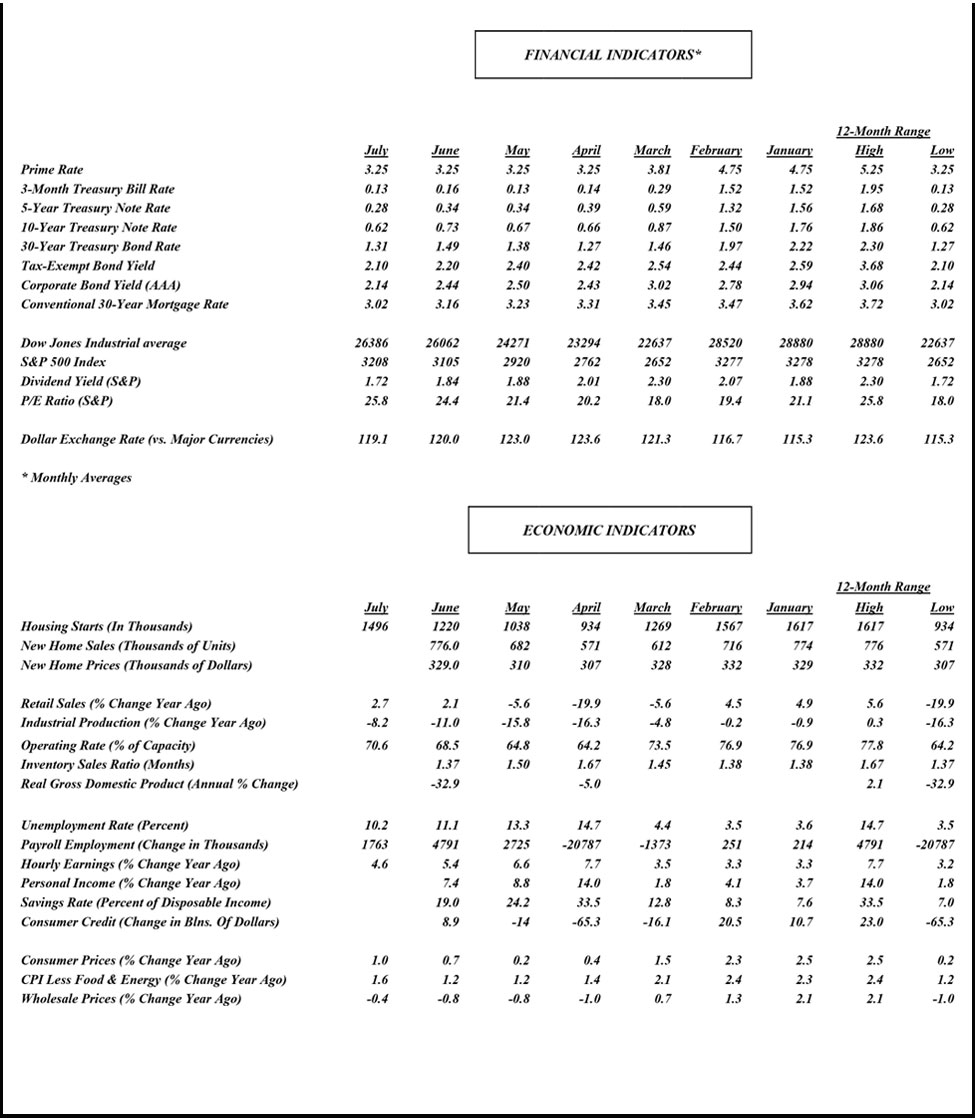