A Glass Half Empty

Despite being portrayed as dismal scientists, we economists are not always pessimistic about economic prospects. In fact, we are happy to report that things are looking up in many respects. Consumers are spending again, factories are revving up operations, housing activity is on a tear and, most importantly, the job market is recovering. The health crisis that has thrown the economy into the steepest contraction since the Great Depression is far from over. But the nation is slowly adjusting to its ill effects, fitfully reopening for business, and hundreds of vaccines are in the pipeline, boding well for widespread inoculation sometime next year.

But while we are not pessimists, the realist in us can’t help but see the glass as half empty. Seven  months into this crisis, one of two laid off US worker remains unemployed, the unemployment rate is on par with past recessions, 60 percent of the unemployed have been so for more than 15 weeks, and the share of permanently unemployed is rising. There are still about eleven million fewer workers collecting paychecks than there were prior to Covid-19 in February. Simply put, the job market is on the mend, but there is still a steep hill to climb before it can realistically be seen as fully healed.

Most disturbing is that with fiscal stimulus running dry, the economy’s growth engine is starting to sputter. Its main cylinder, the consumer, is starting to pull back after flooding the spending stream with the more than $3 trillion in fiscal stimulus funds provided under the CARES Act  and other fiscal programs during the spring and early summer. According to the latest retail sales report, households dialed back spending in August, sending retail sales up by the smallest margin in five months. Nor are we alone is viewing the future with utmost caution. The majority of Federal Reserve officials plan on keeping interest rates near zero at least through 2023, according to projections made at the September 15-16 policy meeting. The Fed believes, correctly in our view, that the pandemic-induced recession was “the most severe in our lifetime”, leaving deep scars that will impede, if not short-circuit, the recovery unless more fiscal aid is forthcoming.

A Short, But Not Sweet, Downturn

In March of this year, the National Bureau of Economic Research (NBER), the official arbiter of when a business cycle starts and stops, determined that the nation fell into a recession in February. That was the shortest time lag on record between the start of a recession and its official recognition by the NBER. But the breadth and depth of the downturn in activity in that short time period justified the quick time stamp. Indeed, the estimated 10.6 percent contraction from peak to trough was the steepest of all post-war recessions.

While the NBER has not yet put its time stamp on the end of the recession, by all accounts the recovery probably began in May, when key economic indicators staged a vigorous rebound. Assuming no double dip and that becomes the official start of the upturn, the coronavirus pandemic-induced recession will become the shortest downturn on record, lasting only three short-months. The last six recessions had an average length of twelve months, with the shortest, starting in January 1980, ending just six months later.

Some might see optimistic signs in the shortness in the latest recession. The reason: on average it took about twice as long for the economy to fully recover from post war recessions. If that time frame were to apply this time, things would be back to normal by October or November, six months after the recession presumably ended. However, that would be an impossible task to achieve. With only about a month to go, the economy as noted earlier, still has a steep hill to climb to get back to where it was prior to the pandemic. Even with a record breaking growth rate expected for the third quarter – with most estimates tracking an annual rate of more than 30 percent – the economy would still only have recovered around two-thirds of the output lost in the second quarter. 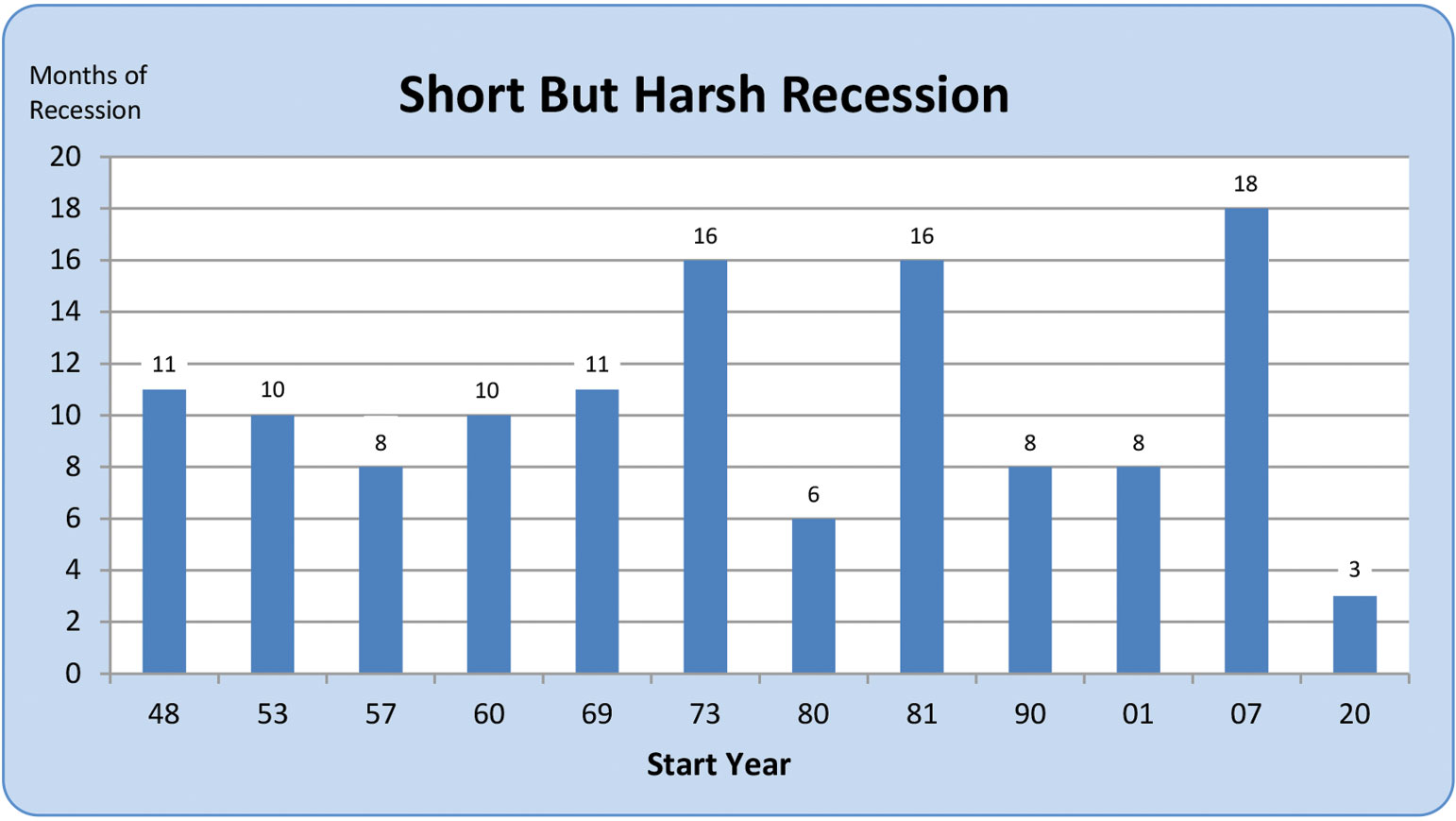 To be sure, the torrid rebound in activity during the third quarter caught many experts by surprise, including the Federal Reserve. At its September policy meeting, the Fed upgraded its

forecast for this year, predicting a much smaller contraction in GDP than thought in its previous quarterly estimates made in June. Of course, back in June, the economy looked to be falling off a cliff, with the economy purging record 22 million workers from payrolls in March and April, driving the unemployment rate to a depression like 14.7 percent, and consumer spending suffered a complete collapse.

But the astonishing plunge in activity was induced by a supply-side shock, and once lockdown restrictions started to ease the apocalypse was averted. During the initial post-lockdown phase of the recovery households rushed to satisfy pent-up demand, armed with stimulus payments and enhanced unemployment checks to finance their purchases. But that initial burst of activity was nothing more than low-hanging fruit, which was rapidly picked and kick-started what is turning out to be a record-breaking growth rate in the third quarter.

In retrospect, the outsized rebound in activity should not have come as surprise. The economy was in good shape just prior to the pandemic, featuring a record low unemployment rate, and most people thought the job destruction caused by the sudden shock of Covid-19 would be quickly reversed once the health crisis was brought under control. Fully three quarters of displaced workers believed they would get their jobs back, so they had little reason not to splurge with the generous fiscal support provided under the CARES Act. In fact, most laid-off workers actually collected more in benefits than they earned while working, something that critics believe discouraged people from seeking a job.

But the $1200 stimulus checks have been mostly spent and the $600 top-up to weekly unemployment benefits expired at the end of July. Meanwhile, with no end in sight for the health crisis and an increasingly broad swath of small businesses that temporarily shut down not planning to reopen, the majority of displaced workers now do not expect to return to their old jobs. Hence, households are turning more defensive in their shopping habits. As noted, retail sales posted a tepid increase in August, one of many recent indicators pointing to a loss of economic momentum heading into the fourth quarter. 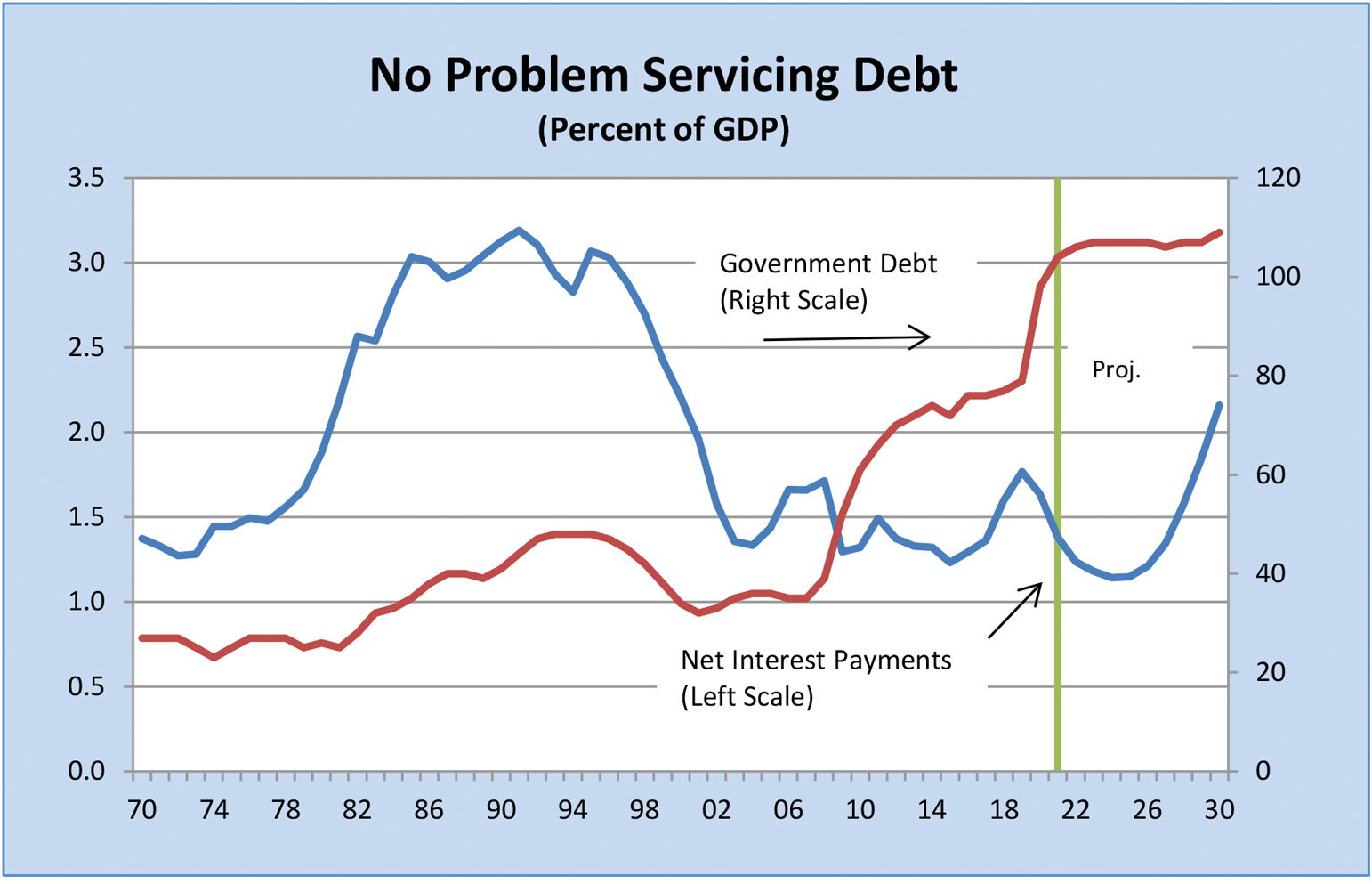 To be sure, the private sector filled some of the void left by the expiration of generous pandemic relief payments to households. Companies have added 10.6 million workers to payrolls over the last four months, lifting labor compensation in the process. The income replacement, however, has fallen far short of the amount needed to offset the dramatic $ 3trillion fall in Government transfer payments to households in recent months. At the end of July, wages and salaries were half-trillion dollars below pre-pandemic levels.

Importantly, the burst of rehiring that occurred when some lockdown restrictions were lifted in May is now fading. The 1.4 million increase in jobs in August was less than half the 3.1 million average increase over the previous three months. Layoffs remain stubbornly high, with the number of people filing for unemployment benefits still running higher than anytime during the peak of the Great Recession. What’s more, low-paid workers continue to be the most vulnerable to the weakening job market, which not only heightens income inequality but also portends more of a drag on consumer spending, since higher wage earners tend to save a larger fraction of their incomes.

Are We Out Of The Woods?

Odds are, the economy turned the corner this spring, emerging from the astonishing freefall thanks to the massive and timely infusion of government stimulus and the quick response from the Federal Reserve. That said, we see four important risks that could lead to a double-dip recession.

First, it appears that a viable long-term health solution to the crisis is still distant, and the risk of flare-ups and a second wave of infections could worsen virus fears and lead to the imposition of stricter social distancing measures. Even without firmer regulation, colder winter weather throughout the country will increasingly prevent a number of activities, most notably outdoor dining and other leisure activities that won’t be moved entirely indoors.

Second, further fiscal aid is essential to prevent an income 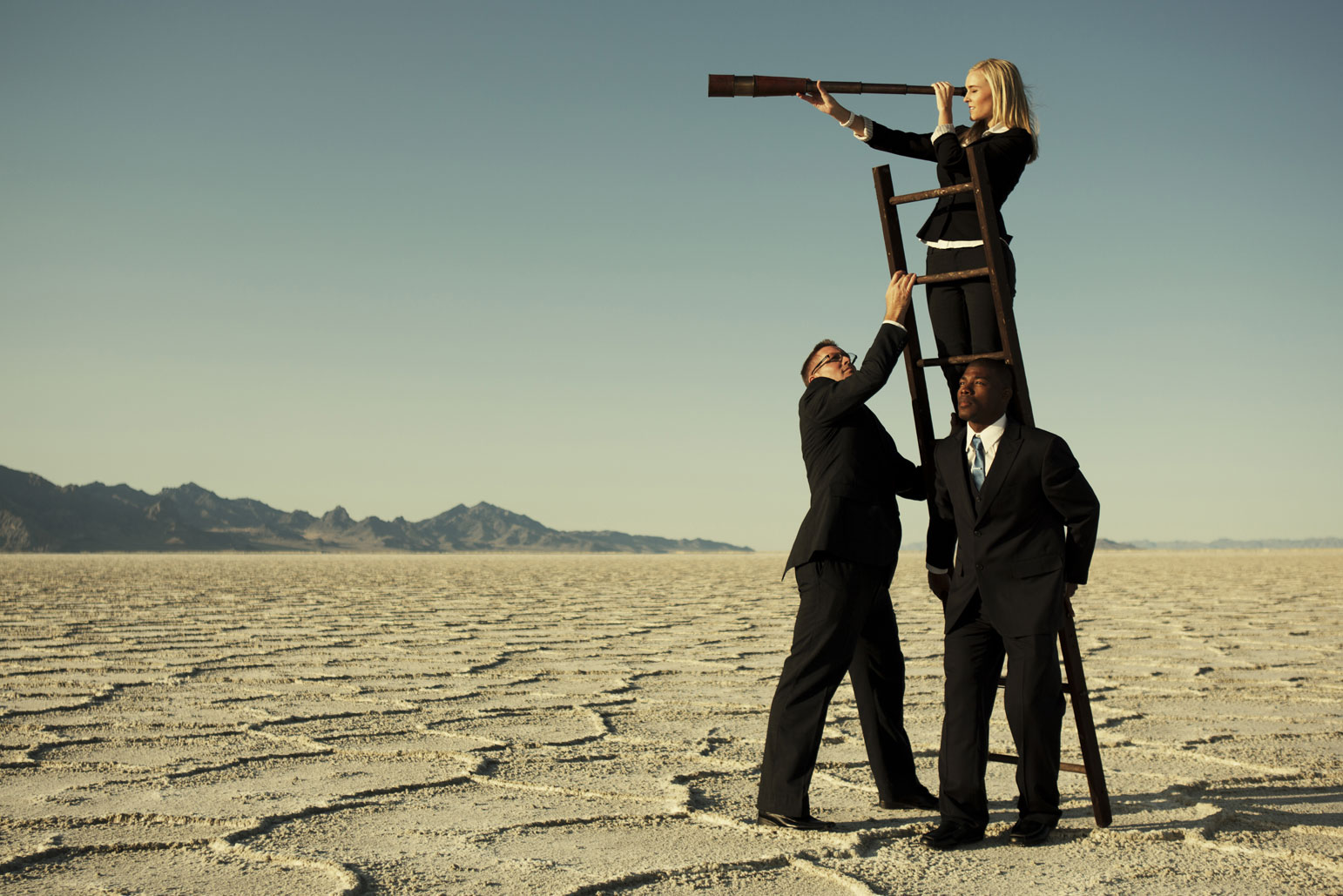 cliff, support small businesses, and prevent state and local governments from slashing outlays on essential services, such as education, health care, safety and protection. Without additional aid, particularly to those most likely to suffer adverse economic effects from the pandemic, the fragile recovery will be increasingly exposed to a setback. Importantly, concerns about rising deficits and government debt should not be a deterrent to more fiscal stimulus. Although Federal debt is poised to reach historic heights as a share of GDP, interest rates are hovering near historic lows. Hence, the net interest burden is also extremely low; according to the latest projections by the bipartisan Congressional Budget Office, government interest payments are set to decline to the lowest level in the postwar era as a share of GDP over the next three years.

Third, tightening financial conditions could pose an additional layer of stress on overstretched corporations. A sudden deterioration of market conditions stemming from rising political uncertainty, elevated trade tensions or a general shift in market sentiment could have severe economic repercussions on a weakened labor market and business investment.

Finally, we are deeply concerned about business closures and permanent job losses. Recent evidence from the Census Bureau Small Business Surveys indicates that 10 percent of small businesses do not expect ever to resume normal operations, while more than half expects that it will take more than six months. With small businesses representing half of private sector employment, that importance cannot be overstated. So in answer to the question, are we out of the woods? Yes, but … beware of the looming risks. 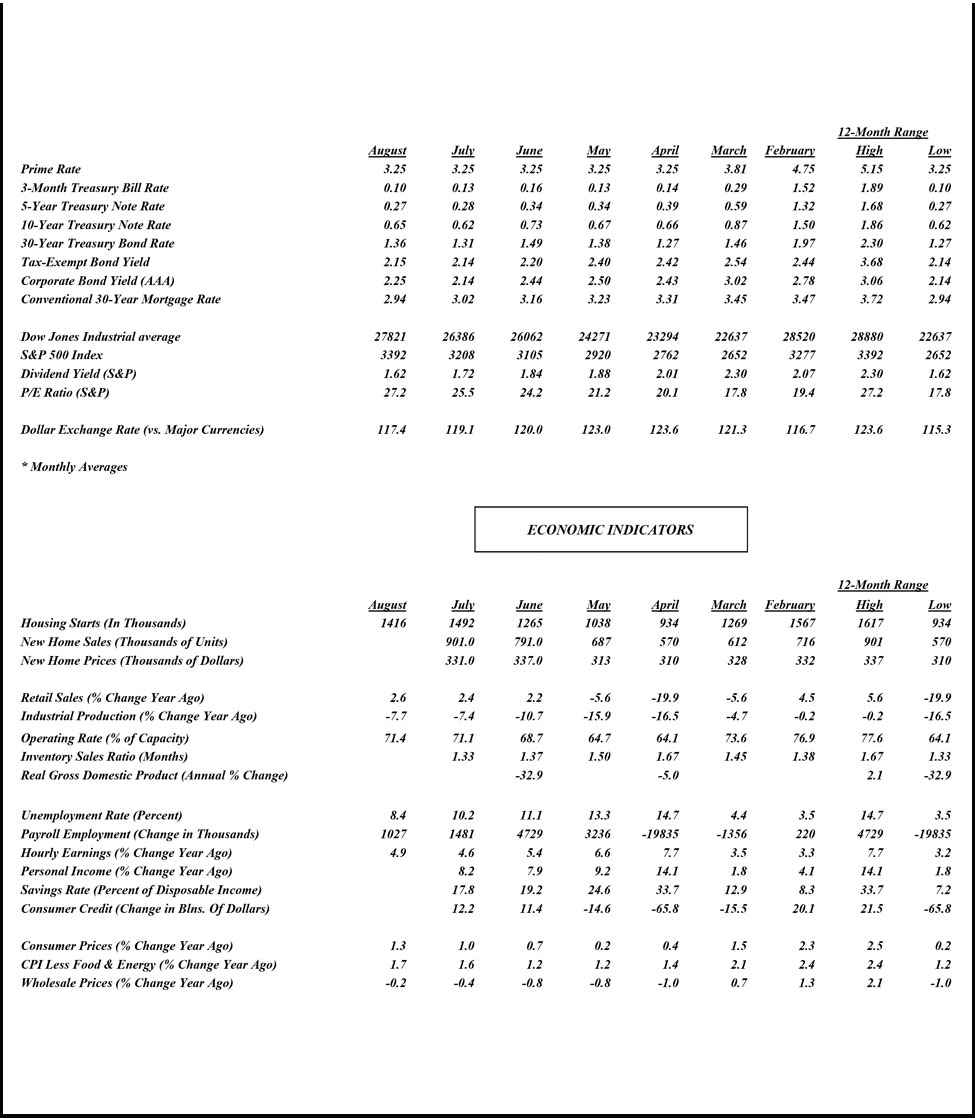