A Host of Uncertainties

To say that uncertainty is rising would be an understatement. Political and policy uncertainties are surging with questions surrounding the next round of fiscal aid, questions around the outcome of the elections, questions around a peaceful transfer of power (if it occurs), and most recently questions surrounding the health of the President, although he apparently has made a swift recovery from Covid-19. Simply put, we have already seen more than a fair share of “October surprises” just a few weeks ahead of the November 3rd elections.

Remarkably, the financial markets have remained relatively calm, even upbeat, throughout these nerve-wracking incidents. Unlike its response to tumultuous October shocks in the past, the stock market has not crumbled and the credit market has remained on an even keel. Perhaps investors are biding time, waiting for a clearer picture on the above uncertainties to come into focus. For sure, the political drama unfolding in Washington is taking center stage, with the twists and turns that have taken place on the campaign trail sucking all the oxygen out of the room. This may be sending investors to the sidelines to sort things out or, more likely, prompting them to scratch their heads over what the consequences of various election outcomes would be. No objective observer can conclusively say which party – or president – would be better for the economy or the financial markets in 2021.

That said, a few things are abundantly clear. The coronavirus is still very much with us and is likely to be a driving force in the economy next year as well, even if a vaccine and effective treatments are developed and made widely accessible. Second, the economy is on the recovery path, thanks to the aggressive efforts of policy makers last spring to jump-start growth with a massive infusion of fiscal and monetary aid. But the vigorous rebound in activity during the spring and early summer is now fading, even as the policy fuel driving the rebound is running dry. It’s still uncertain if or to what extent further support from Washington will be forthcoming either before or after the election. Without it, we suspect that the recovery will continue to lose momentum and may even approach stall speed as the calendar turns to 2021.

As of this writing, lawmakers remain at loggerheads over another pandemic relief bill, although negotiations are still going on and a deal could be struck in coming days. One issue holding things up is the concern among some over the budget deficit, which ballooned to $3.1 trillion in fiscal 2020, triple the red-ink of the previous year. Their fear is that the ever-growing government debt, now at a post-World War II high of over 100 percent of GDP, will create a huge debt-servicing problem that will eventually strangle the economy and leave an untenable burden on future generations.

However, as we noted in last month’s commentary, this should not be an issue for at least several years as historically low interest rates have reduced interest payments more than growth in outstanding debt has increased them. Federal net interest payments fell by $31 billion in fiscal 2020 and the CBO estimates that net interest payments will take a record low share of GDP over the next three years. Importantly, however, the issue of burgeoning government deficits is camouflaging a potentially more ominous trend in the private sector, namely the escalating volume of debt that businesses have been taking on this year.

According to the Federal Reserve’s latest flow of funds data, nonfinancial business debt increased at the fastest rate on record over the first half of the year, posting annual gains of 18.4 percent and 14.0 percent in the first and second quarters, respectively. Those increases lifted total debt outstanding to $17.6 trillion, fully 90 percent of GDP. That outsized share dwarfs anything seen in the postwar era and comes at a time when the recovery is entering a perilous phase of slower growth that could well deprive companies with the revenues needed to service debt.

Less Bang for the Buck 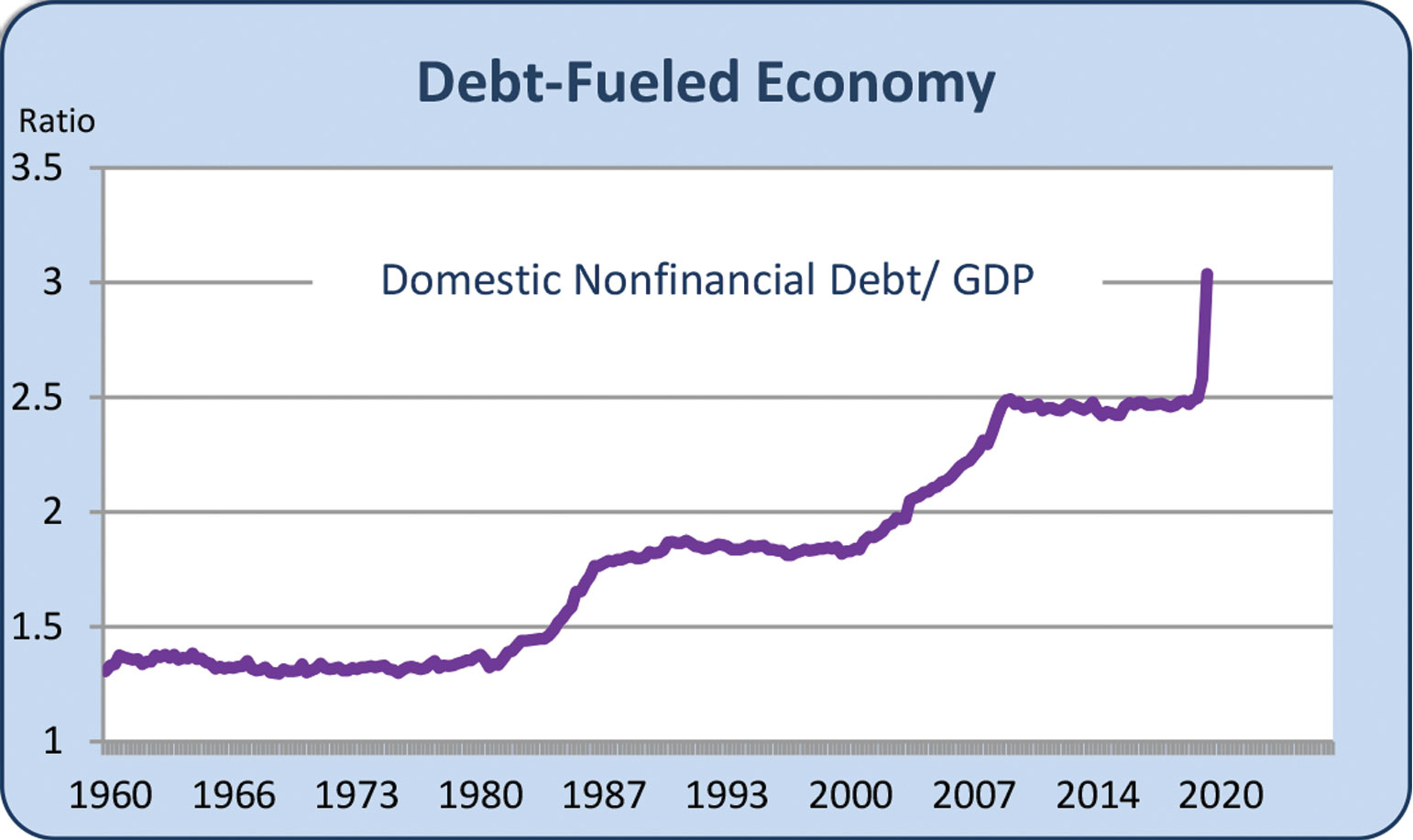 the economy is becoming increasingly dependent on debt to fuel growth. Following the record volume of funds raised by businesses and the Federal government over the first half of the year, total domestic nonfinancial debt in the U.S. surged to just under $60 trillion, an increase of almost 70 percent since the end of the last recession. To put that in context, GDP equaled $19.5 trillion in the second quarter. Hence, it required $3 in debt to generate $1 in goods and services in the U.S. That’s up from $1.84 at the turn of the millennium and from under $1.50 from 1950 through the mid-1980s.

The ever-growing influence of debt to fuel growth is not a sustainable trend. True, the surge in government borrowing when the economy is struggling is warranted; indeed, it is even responsible, since the task of fiscal policy is to stimulate growth during recessions or when the economy is operating below its potential, as is currently the case. The government’s role is to fill a void when the private sector fails to step up to the plate. True, if it overstays that mission beyond the point it is needed, unwelcome economic disruptions, such as higher interest rates or inflation, could result. Neither is in danger of occurring in the foreseeable future What’s more, the government owns the printing press, so it can always repay its obligations, eliminating the threat of default.

That’s not the case in the private sector. The surge in corporate debt if used to finance productivity-enhancing capital and equipment is undeniably a positive force for the economy, increasing its long-term growth potential and generating the income that over time covers debt servicing and lifts wages for workers without stoking inflation. But the funds raised in the capital markets this year have not been put to productive uses. Instead, most of the proceeds have been used to reward shareholders via stock buybacks or increased dividends, finance mergers and acquisitions or to restructure balance sheets.

To be sure, corporations, like the government, have also taken advantage of historically low interest rates to issue debt, as investors have eagerly snapped up a record volume of bonds offering yields that still exceed the skimpy returns on Treasury securities. But riskier borrowers have accounted for the bulk of this year’s debt increase, issuing junk or the lowest investment-grade issues even as the risk of default is increasing. That risk is being amplified by the slump in corporate profits, as corporate cash flow slipped below capital spending in the second quarter, resulting in the first negative financing gap since 2018. Of course, the economy suffered its worst contraction during the period since the Great Depression, which vaporized business revenues. 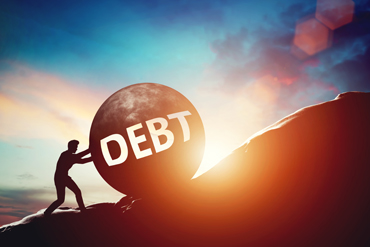 Although the economy snapped back in the third quarter, profits have not recovered nearly as much, if at all. But investors remain unphased, purchasing these lower quality bonds for a relatively small yield premium over Treasury securities, a spread that is close to that seen during a healthy expanding economy. This may not be a problem if the economy continues to forge ahead into 2021 and rejuvenate profit growth. That would check the rising tide of defaults among a broad swath of low-grade companies struggling to emerge from under the grip of the pandemic.

But these companies are also the most vulnerable if the resurgence of virus cases prompts widespread shutdowns and short-circuits the recovery. That, in turn, would amplify the increase in default rates and cause a financial disruption that reinforces the headwinds sending the economy backwards. The Federal Reserve has already instituted programs to insulate the financial markets from destabilizing forces, which nipped a possible crisis in the bud earlier this year when the pandemic struck and caused a sharp widening out in credit spreads. But it does highlight one of the risks associated with a highly leveraged economy. When things go bad, policies have to work harder to prevent a recession, countering not only the usual economic shocks but also the financial turbulence associated with a debt-laden economy.

As the calendar runs out on 2020, the final chapter of a year to forget is facing too many imponderables to provide a clear sense of what lies ahead in 2021. Will the election results be contested? Will a stimulus bill keep the recovery going? Will a vaccine be widely available and, if so, when? Importantly, if a vaccine does become available, will it be widely accepted by a public that has become increasingly skeptical of its safety? Surveys show that more than half the population is concerned that a vaccine is being rushed to the market too quickly and would refrain from taking one until its safety is confirmed.

More immediately, how will the government respond to a second wave of virus cases that appears to be

underway, not only in the U.S. but also overseas? New cases are accelerating in the majority of states, and the total has recently hit levels not seen since July. Another full shutdown is not in the cards, as it would face a good deal of resistance by a public that has already demonstrated lockdown fatigue. But the biggest hotspots are already forcing local governments to reimpose restrictions on some forms of commercial activity, limiting social gatherings at restaurants, bars and other service providers, which threatens to stifle the reopening process that propelled the economy’s rebound in the third quarter. Clearly, the path of the virus and the government’s response will be the most influential forces shaping the economy’s performance over the final months of this year and into 2021.

Assuming the outbreak can be managed without causing a national lockdown similar to the one this spring, the economy should be able to stave off a double dip recession. But a full recovery is a ways off and getting there will require more support from policy makers. The Federal Reserve is fully on board with this sentiment and promises to keep interest rates at rock-bottom levels through at least 2023. That may not be enough to counter the pandemic-related headwinds facing the economy next year. But at least it will help lighten the burden of a heavily leveraged business sector.