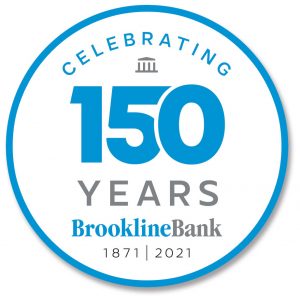 Boston, MA – Brookline Bank marks its 150th anniversary on February 24, 2021. Brookline Bank will recognize the milestone with celebrations across all of its locations and with enhancements to many of its services throughout the year.  Brookline Bank was founded to provide local residents a safe place to deposit their modest savings. From its beginning, Brookline Bank has been community and customer focused. In 1871, Brookline was mostly a rural farming community that grew produce for the Boston marketplace. Merchants and residents needed a local bank to act as a safe haven for their money and to foster economic growth.

As Boston grew, so too did the community of Brookline. Brookline Bank evolved with the region, expanding its services and network as the area grew more diverse both in terms of industry and population. Today, Brookline Bank is a major competitor in the commercial banking space and offers a suite of robust banking services that rival large banks while continuing to maintain the personal and attentive customer service the bank’s customers expect.

The bank is publishing a sequel to an anniversary book created for the Bank’s centennial in 1971. Brookline Bank — 1971-2021 Years of Transformation chronicles the Bank’s executives, customer-facing employees, and major business milestones over the past 50 years – a period of major growth and transition for Brookline Bank. An e-book version of the publication is available at brooklinebank.com/150.

“In reality, the bank didn’t change that much through its first 100 years,” said Paul Perrault, President and CEO of Brookline Bancorp. “It is the last 50 years that have seen the dramatic changes.  Of course, banking in general evolved with ATMs, online banking, and other technological advances.  But as significant for Brookline Bank, it was during these years that the bank truly transformed itself from a small savings institution to a full-fledged commercial bank.”

From the time of its centennial in 1971, Bank assets increased from $144.2 million in 1972 to more than $7.6 billion in 2020. Deposits grew from about $30 million to $5.6 billion.  During this period, the Bank’s primary business transitioned from solely personal banking to serving small and large business, as well as commercial real estate investors.

In his foreword to the anniversary book, Brookline Bank President and CEO Darryl Fess reflects on some of the bank’s written history. It stated, “Founded in 1871 by a group of public spirited people concerned with providing a safe depository for the savings of people of moderate means, Brookline Bank has had a long history of providing financial support to its local community.” Fess adds, “These words were written in our CRA statement almost 25 years ago and are as true today as they were then. As Brookline Bank marks its 150th year, it has remained a part of its community for many generations of clients and friends. The number and scope of our communities have grown and the world has certainly changed, but the need for local banking institutions has not.”

Brookline Bank has also been commemorated by Governor Baker’s office in a citation issued to the bank on its 150th anniversary.