The bleak economic landscape that prevailed in the closing months of 2020 has not faded from the collective memory of the American public. With the pandemic still claiming too many lives and the economy still reeling from business restrictions and virus fears that hamper normal behavior, the lingering effects cannot be ignored. Yet as the curtain rises on 2021, green shoots are appearing on a number of fronts and will soon take center stage. Act 1 is the tremendous progress taking place on the vaccine rollout, which is now inoculating more than 1 ½ million Americans a day and is set to accelerate markedly over the next few months. Herd immunity by the summer now looms as a real possibility, which would be the first step towards bringing the nation’s economy back to health. 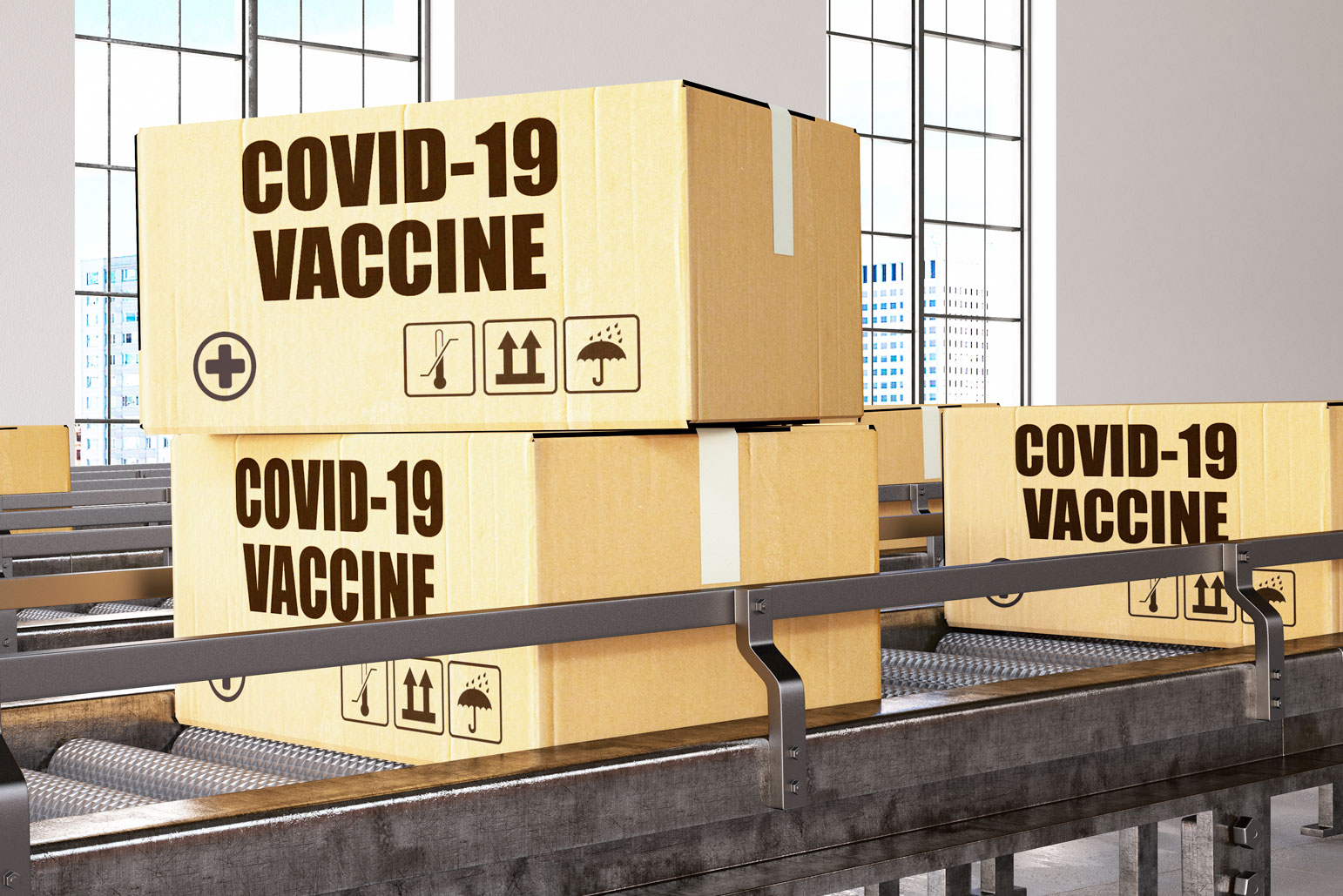 Act 2 is in the wings, as Washington is about to unveil a torrent of fiscal stimulus that will not only nurse the economy through the pandemic’s remaining ill-winds, but set the stage for a robust post-Covid rebound as well. After suffering the most severe contraction in 2020 since demobilization in 1946 – a 3.5 percent decline in GDP – the economy is projected to surge by about 6.0 percent this year, which would be the strongest in nearly 40 years. The revival in output will also stoke the job-creating engine, bringing back more of the 22 million workers who were laid off during the height of the pandemic. And with all three branches of the government under the control of one party, the prospect for additional fiscal stimulus down the road is enhanced, including a very aggressive infrastructure bill that could inject as much as $7 trillion more into the economy over the next several years.

Not surprisingly, this massive volume of fiscal intervention has spurred outcries from a wide spectrum of critics. The $1.9 trillion American Rescue Plan that the Biden administration hopes will be fully in place by mid-March is drawing criticism from some prominent liberal economists as well as traditional deficit hawks. The chief concern is that the fiscal thrust would send the economy into overdrive and spur an unwelcome inflation outbreak. The administration, however, claims that the nation has just suffered a generational setback requiring policies to “go big” not only to redress the shortfall in overall economic activity that the pandemic caused but to correct the deepened inequities that it facilitated over the past year. This debate is far from settled; no doubt, it will dominate the narrative that shapes policies over the next several months.

Inflation has been the talk of the town lately. Investors have been piling into inflation-protected securities, driving market-based inflation expectations to the highest level since 2013-2014. At the same time, consumer inflation expectations have been trending up. According to the latest University of Michigan survey, households expect inflation over the next year to reach the highest level since July 2014. Both Wall Street and Main Street are bracing for higher prices, even though actual inflation remains exceptionally tame. Core consumer prices, which exclude volatile gas and food prices, is up just 1.4 percent over the past year. That annual rate has barely changed over most of the past two decades.

The low inflation reading  reflects in some part the impact of 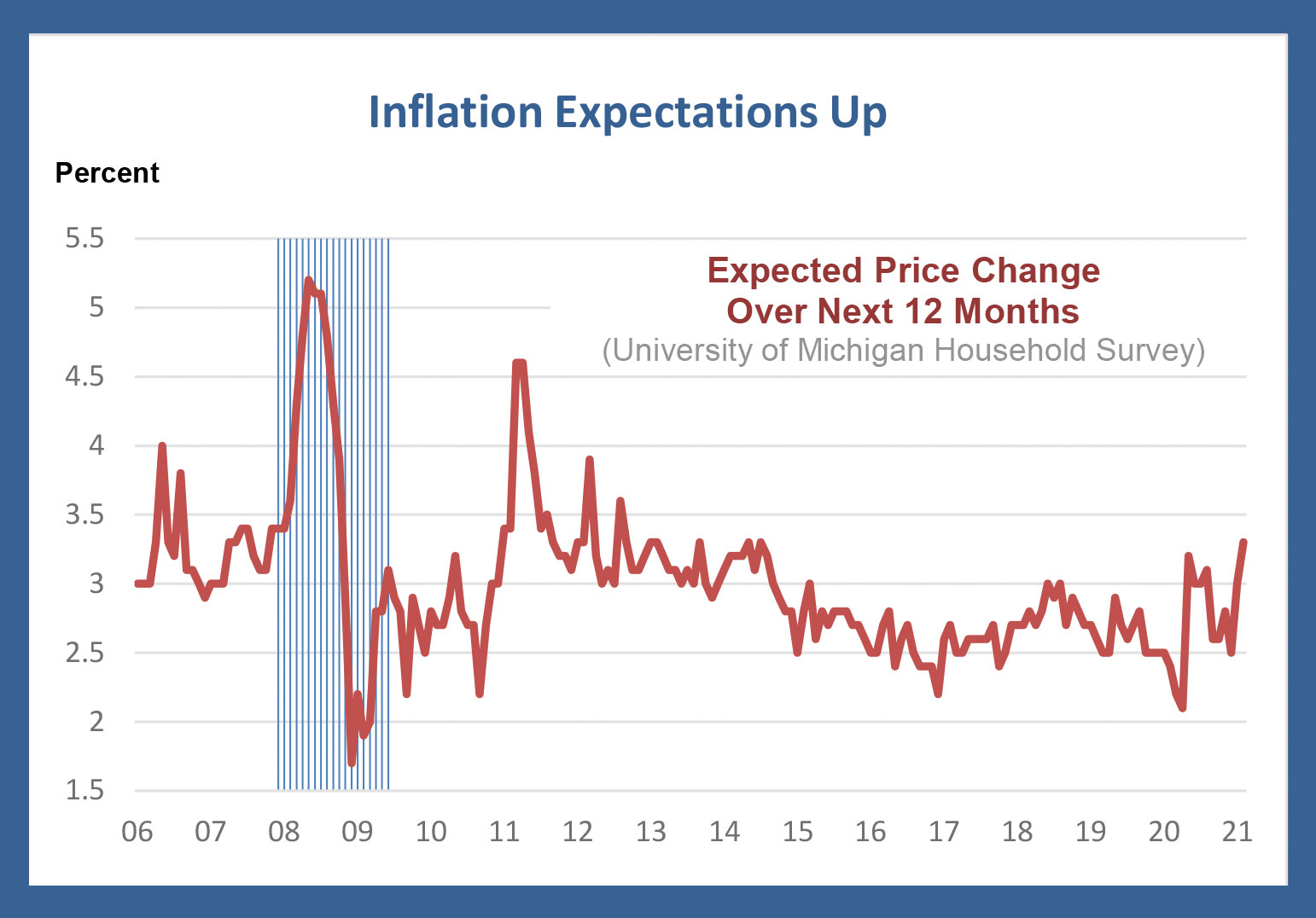 the pandemic. The historic plunge in economic activity last winter combined with lockdown restrictions severely depressed consumer spending, a time-honored catalyst for companies to keep prices as low as possible. Although the economy has since recovered, it remains significantly below the level of activity that prevailed prior to the health crisis. At the end of 2020, GDP had recouped two-thirds of its lost output, remaining $475 billion below its pre-pandemic level.  According to the Congressional Budget Office, the economy is running  3.5 percent, or $630 billion, below its potential output, which is the volume of goods and services that could be produced when the economy is operating at full capacity and the labor market is at full employment.

The argument presented by some prominent economists is that the $1.9 trillion American Rescue Plan proposed by the administration on the heels of the $900 billion of fiscal stimulus passed in December is more than enough to plug the shortfall that the pandemic recession has left in the economy. Even excluding the impact of the Rescue Plan, the CBO projects that the economy will have closed the pandemic-induced output gap by the middle of this year.  Critics of the fiscal stimulus argue that once the gap is closed, any additional dollars thrown at goods and services would drive up prices. Too much money chasing too few goods is the typical refrain used by inflation worriers.

No doubt, inflation will look a bit alarming for a period of time later this year. One reason: when the health crisis ends, businesses reopen and people feel confident about shopping in person, prices will bounce back from their depressed levels seen last winter. Compared to those depressed levels, the increase in prices will seem magnified as will the inflation rate. The question, is, once those so-called base effects are removed from the calculation, will the underlying fundamentals keep pushing inflation higher?

Federal Reserve officials, including chair Powell, are betting that the inflation spike expected over the spring and summer will be transitory, reflecting both the base effects as well as the unleashing of pent-up demand that will overwhelm supply for a while. As lockdown restrictions are lifted and people are no longer shut in their homes, airlines, hotels and other service providers will no doubt be overwhelmed with bookings that will put upward pressure on prices.

But inflation is a process that builds over time. Temporary inflation binges often have been seen in the past, reflecting numerous catalysts – energy spikes, geopolitical events, trade wars that create supply disruptions as well as outright military conflicts, among others.  Unless these catalysts are reinforced by inappropriate policies that allow inflationary pressures to flourish, they should not lead to a sustained pick up in inflation. In the late 1960s and 1970s, for example, fiscal and monetary policies fostered expectations of higher inflation more often than not. Workers would demand higher wages to compensate for expected higher prices, and employers would grant the increases knowing that they could raise prices to cover the costs. This vicious wage-price cycle was only broken when the Federal Reserve stamped firmly on the monetary brakes, sending the economy into a deep recession in the early 1980s, and spent the next several decades convincing everyone that it would no longer allow inflation to get out of control.

The Fed’s inflation-fighting credibility remains firmly intact, despite its stated willingness to allow inflation to exceed its 2 percent target for a period of time. True, inflation expectations, as noted earlier, have picked up. But bond investors are still pricing in an inflation rate of slightly over 2 percent, which hardly qualifies as an inflation break-out. Households do expect inflation to rise to 3.3 percent over the next year. But  their long-term inflation expectations remain unchanged at 2.7 percent, suggesting that they expect any near-term spike to be transitory. 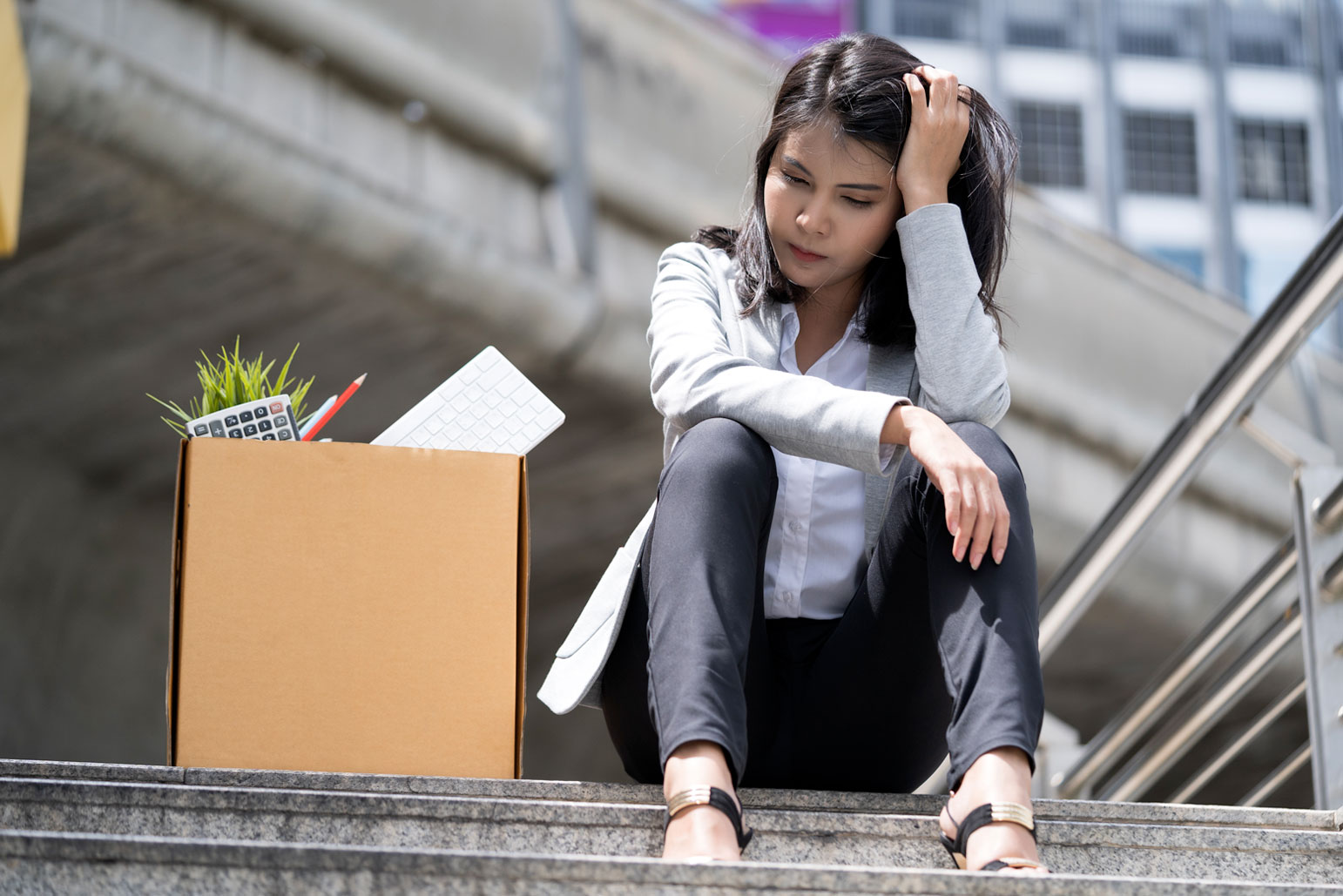 Nor will pressures come from the labor front. The job market has recovered a substantial fraction of the losses suffered at the height of the pandemic last winter but there are still 10 million fewer workers collecting paychecks than there were in February. What’s more, millions of workers have dropped out of the labor force entirely, either voluntarily – for health reasons or school closings that require home care – or involuntarily, believing that no jobs are available to match their skills. As a result, the labor force participation rate is a full two percentage points below pre-pandemic levels and hovering near the lowest level since the 1970s.

Simply put, there is still considerable slack in the labor force that is underestimated by the current 6.3 percent unemployment rate. The real unemployment rate, adjusted for labor force dropouts as well as involuntary part-time workers, is closer to 10 percent. With this much labor on the sidelines, it is hard to imagine workers gaining enough bargaining power to demand strong wage packages that would put upward pressure on prices and stoke a sustained increase in inflation. The Fed agrees with this assessment and is willing to let the economy run hot for a while even if inflation exceeds its 2 percent target for a period of time. Hence, along with the muscular fiscal stimulus coming on stream, the central bank remains committed to an easy monetary policy over the foreseeable future.

Learning From the Past 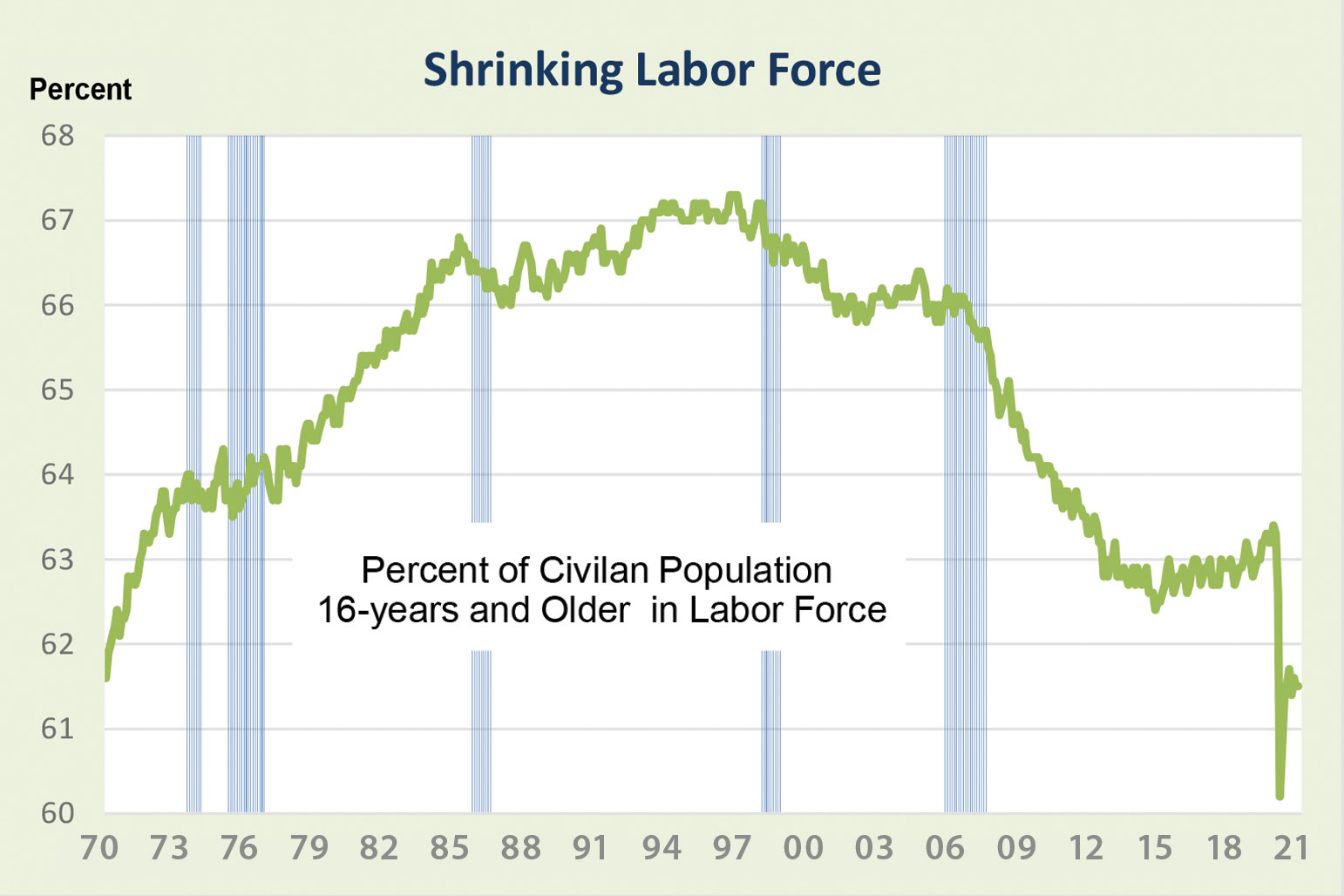 stimulating fiscal policy that sets some economists on edge, fearing that it will send the economy into overdrive and unleash uncontrollable inflation. Clearly, the risk that the economy grows faster and inflation accelerates more than expected has increased. But policy makers are understandably willing to take the risk of doing too much rather than too little.

For one, officials are all too aware of the consequences of doing too little, recalling the lessons following the 2008 Great Financial Crisis. Then, the administration settled for a smaller stimulus bill than desired, acceding to concerns from deficit and inflation hawks, which limited the strength of the subsequent recovery. It took more than five years before employment finally recovered the job losses incurred during the crisis. What’s more, the inflation fears that the fiscal stimulus generated never came to pass. Indeed, even as unemployment steadily declined to a postwar low of under 4 percent ten years after the crisis, inflation stayed under wraps.

Importantly, as joblessness steadily declined for a record 113 consecutive months, marginal workers who had long been on the sidelines found work and wage growth became more inclusive, pulling in low-paid workers who had been left behind. The health crisis has reversed all that progress, taking the biggest toll on low wage workers who are now experiencing the longest stretch of unemployment, and deepening the income inequality that has become a defining issue in recent years. This challenge of correcting this dispiriting trend is far more difficult than restraining a temporary inflation increase, underscoring the desire of policy makers to “go big” this time around. 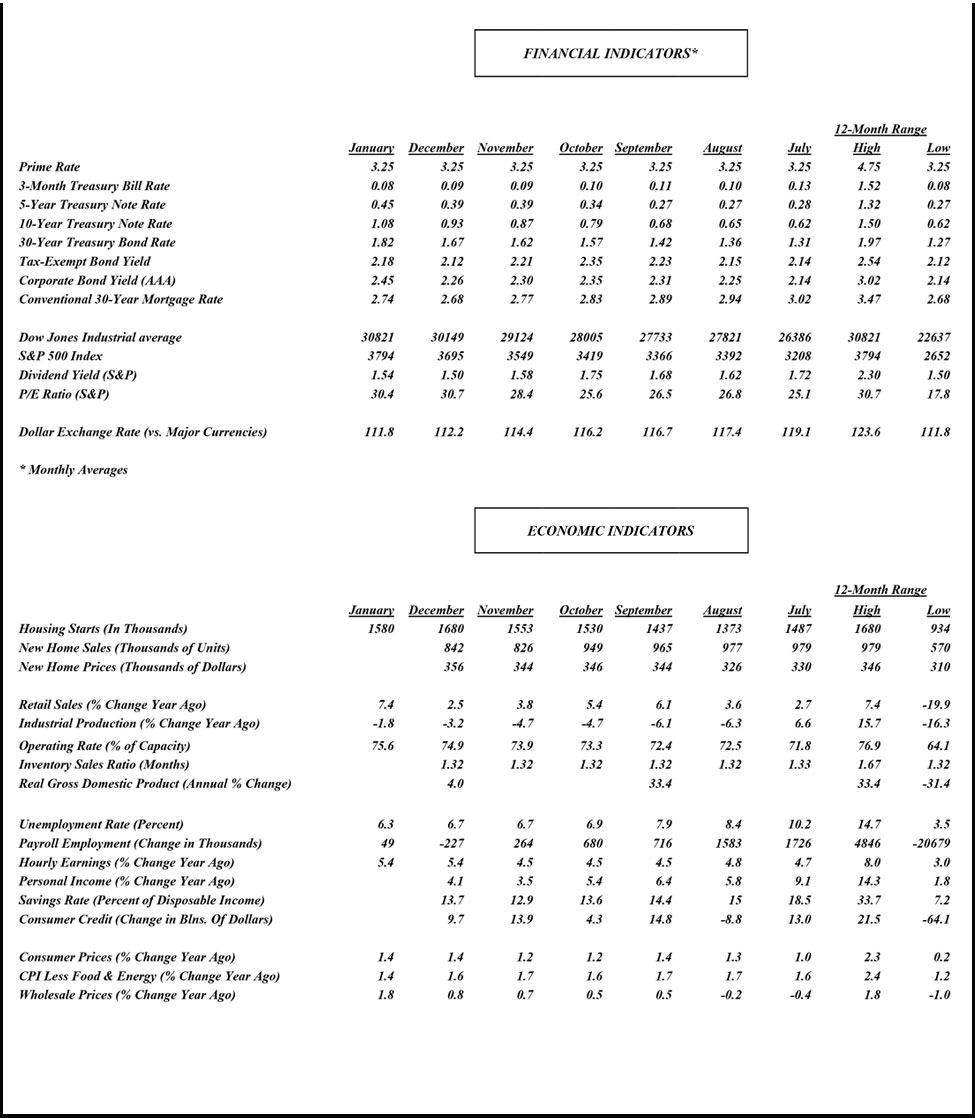