It won’t be confirmed for at least several months, but the U.S. is almost certainly hurtling into a recession. A little over a month ago, when the Covid-19 coronavirus first hit the headlines we, along with most economists, thought the nation could weather the storm if proper policies were quickly implemented and the outbreak contained before becoming a global pandemic that would invade American shores with a devastating blow. Bolstering this optimistic assessment, the U.S. economy was riding high before the shock struck like a thunderbolt. The job market was humming, consumer confidence remained elevated and the financial markets were pricing in continued growth in activity and earnings, although at a diminished pace. Indeed, stock prices hit a record high on February 19.

Simply put, it was thought that the economy had enough of a cushion to absorb a temporary

setback, and only lower interest rates engineered by the Fed would be needed to keep the expansion going. But hopes for a “soft landing” came crashing down as cases of the virus spread like wildfire and fear gripped the public. Ultimately, efforts mandated by governments to contain outbreaks delivered the fatal blow to the economy, prompting households to self-quarantine, factories to shut down and small businesses to close for lack of foot traffic. Daily life ground to a halt, as did commerce, and the financial markets got swallowed up in a tumultuous firestorm. The stock market gave up all of its gains achieved since President Trump’s inauguration and the Federal Reserve resurrected the emergency measures used during the financial crisis, including slashing interest rates back to near zero.

Adding to the economy-crushing impact of the pandemic, another oil price war broke out, sending oil prices plunging and leaving the energy industry in shambles. The precipitous fall in oil prices put more downward pressure on inflation and inflationary expectations, giving the Federal Reserve extra urgency to jump-start growth. But the Fed has already used up most of its ammunition so more of the heavy lifting is now being passed on to Washington. While the additional litany of fiscal measures announced in recent weeks should provide welcome relief to the more hard-hit sectors of the economy, the crisis will not end until the pandemic is brought under control, something that requires the heroic efforts of health experts more than policy makers.

End of an Era

The longest U.S. economic expansion on record has come to an end. After growing for over 10 years, the economy likely entered contraction territory in mid-March when a perfect storm of depressants on demand and supply coalesced to shut down virtually all forms of business activity. Not in recorded history, has the fall from grace been as swift and brutal as the one now unfolding. Indeed, just prior to the onset of the coronavirus, the economy seemed to be picking up momentum.

Instead of running out of steam, as is customary in the late stage of a business cycle, the job market was drawing in a surprising number of workers that languished on the sidelines for years. Belying steady proclamations from experts that the pool of available workers was running dry, companies expanded payrolls by an astonishing 253 thousand in both January and February, far exceeding the 178 thousand monthly average in 2019. It was also well above the trend growth rate in the labor force estimated to be about 120 thousand a month.

With the job market booming, it seemed that the economy was inoculating itself from any external shock, much as it had from the tariff wars that sapped considerable strength from the economy over the past two years. But conditions may have been robust heading into the new year, but they did not render the economy immune from the global pandemic that was about to strike. The first quarter may still show positive growth, albeit just barely, thanks to the strength in January and February. But March is looking like a disaster and the period ahead will be considerably worse.

It would be premature to count consumers out based on their recent listless behavior. To 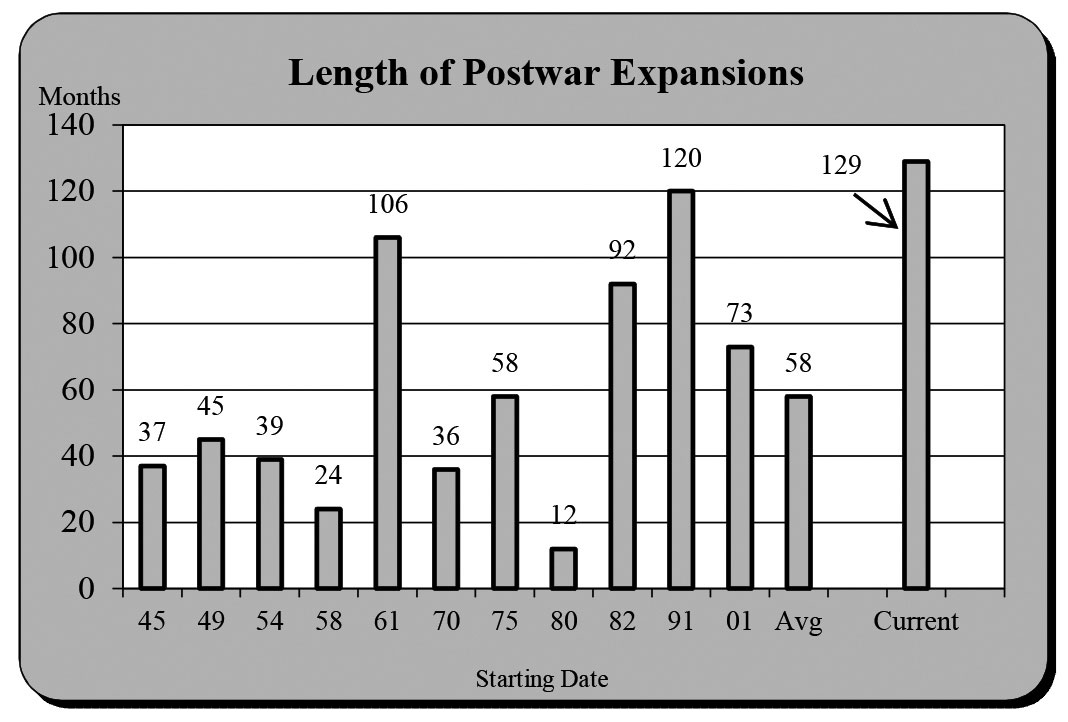 some extent, the fourth-quarter slowdown in spending occurred because households pulled forward purchases into the third quarter to avoid higher prices associated with an expected increase in tariffs. Consumers may also have turned more cautious late last year in response to alarming headlines regarding the trade war, which stoked fears of a sharp economic slowdown and layoffs. The phase-one trade truce with China should put some of those fears to rest.

What’s more, the fundamentals underpinning consumer spending appear solid. The economy continues to generate new jobs at a healthy pace, the unemployment rate is at historic lows and incomes are growing. Balance sheets are also in good shape; assets are appreciating, debt as a percent of income is down significantly since the financial crisis, the personal savings rate is near the high for the expansion and household confidence remains elevated.

Simply put, there is little reason to think that consumers are about to go into hibernation. As long as they keep their wallets and purses open, the economy should be able to survive the shocks that are currently dragging down growth. The first quarter may not look pretty, but consumers have enough firepower to keep the economy afloat. Assuming the coronavirus does not morph into a global pandemic, a gradual, modest rebound in activity is poised to take place over the spring and summer months. But what can we expect after the shocks from Boeing and the coronavirus fade?

Back To The Future

Some are comparing the current crisis to the 2008-2009 Great Recession and global financial crisis. But there are a few big differences. For one, the media coverage of the last recession did not include a daily mortality rate, which is stoking widespread fear and a wartime bunker mentality into the mindset of the nation and its leaders. While that is having a more jarring impact on the economy and creating more immediate carnage, it is also mobilizing policymakers into a greater sense of urgency and cooperation than was the case a decade ago.

For another, the 2008-09 episode posed a more existential threat to the economy as the financial system  — the economy’s lifeblood – was exceptionally fragile and under attack from a housing collapse and mountain of failing subprime loans. It took time for policymakers to acknowledge the magnitude of the threat and only then did they embark on a series of unprecedented measures to save banks and other institutions and keep vital credit flowing to households and businesses. Back then, the Fed and fiscal authorities were learning on the fly;

but that experience provides current policymakers with a blueprint to draw on. Meanwhile, new regulations and legislative oversight since the financial crisis have prodded banks and other institutions to build up capital and reserves, putting them in a stronger balance sheet position to weather adversity.

But while most financial institutions are not in danger of collapsing as they were a decade ago, the capital markets are coming under considerable stress, weighed down from years of turbo-charged debt financing from corporations taking advantage of historically low interest rates. A major share of corporate bond issuance in recent years has come from companies with a lower credit rating, which makes them a riskier asset when the economy – and hence earnings – weakens. Until the coronavirus struck that was not a concern, as investors were willing to trade risk for yield in a healthy economy. But that trade-off has now been flipped. Investors are running for the hills, shunning risky assets for safe havens, most notably Treasury securities, sending corporate bond yields sky-high relative to government yields. With hundreds of billions of dollars of these issues coming due over the next year, many companies will not be able to refinance maturing debt, raising the prospect of cascading defaults and bankruptcies.

The potential liquidity crisis emerging in the debt markets has spurred the Federal Reserve into action, much as it did during the financial crisis. In addition to slashing its policy rate to near zero and reviving the asset purchase program, it also relaunched a number of funding facilities to support the commercial paper market, money market funds and primary dealers that can use municipal bonds and a range of other securities as collateral to obtain funds. There is every chance the Fed will also ask Congress for authority to purchase corporate bonds directly, which would help stem the prospective turmoil that would otherwise occur as investors shun these securities.

To be sure, the enormous fiscal and monetary stimulus that is flooding the economy and

financial system is aimed at jump-starting economic growth after the pandemic runs its course as much as limiting the carnage that is already baked in.  Assuming the coronavirus is contained over the summer, the economy should snap back to life late in the year, with GDP rebounding strongly by the fourth quarter. Admittedly, that optimistic assessment assumes the fallout from the carnage now being felt in the economy and financial markets does not leave a lasting scar that impairs consumer and business behavior over the longer term. Some believe that the harsh recession a decade ago is at least partly responsible for the economy’s subpar – albeit lengthy-recovery, as memories of the wealth destruction and surge in unemployment prompted consumers to restrain spending more than they otherwise would have.

But the last recession stretched out over a lengthy 18-month period and the maladies that brought the economy to its knees took a long time to heal. The current downturn should be much shorter and its catalyst should not have a lasting effect on economic behavior once a cure is found. Simply put, the fate of the economy rests in the hands of health professionals as much as with policy makers. Importantly, unlike the experience during the Great Recession both the fiscal and monetary authorities are responding to the crisis with much more urgency, which should spur a faster and stronger initial recovery this time.