Boom is Near, But Not Full Employment

The well-telegraphed heat wave in economic activity is underway. Most key economic data for March exceeded expectations, punctuating a quarter that turned out to be considerably stronger than anyone predicted earlier in the period. Importantly, the mercury is poised to turn hotter in the second quarter, thanks to another round of government stimulus and the accelerated pace of vaccinations that is bringing the pandemic closer to an endgame. Health officials in the U.S. now expect herd immunity, wherein 70-80 percent of the population receives a shot in the arm, to be reached about the middle of the year. That’s about three months earlier than these experts were predicting a few months ago.

As a broader swath of the economy reopens for business, customers are returning in droves, unleashing a torrent of pent-up demand. Retail sales exploded in March and households are poised to continue their shopping spree throughout the spring and summer months. Flush with cash from the government’s $1,400 checks sent out in March as well as bloated bank balances from unspent funds during the pandemic, they are well positioned to keep their wallets and purses open for some time. And while consumers are the main catalysts driving growth, they are receiving an important assist from the housing sector. The strong demand for housing is stoking homebuilding activity, with housing starts in March surging to the highest level since 2006, the high water mark of the ill-fated housing boom of the 2000s.

To be sure, the economy’s growth engine is not firing on all cylinders. Bogged down by supply chain disruptions, factories are struggling to keep up with demand. Auto manufacturers, for example, have been forced to cut production due to a shortage of semiconductors, and many producers can’t get supplies on time due to bottlenecks at ports that’s delaying the unloading of goods. These supply impediments, in turn, are boosting production costs and spurring price hikes on a wide range of products. What’s more, while there are still 8.4 million fewer workers drawing paychecks than there were prior to the pandemic, many business owners are having difficulty filling positions. These hiccups expose the ongoing scars from Covid-19 and reflect an economy that has not fully healed.

When it comes to steering the economy, consumers are in the driver’s seat. Personal consumption accounts for nearly 70 percent of GDP so whether the economy outperforms, turns in a middling performance or under performs its long-term trend rests almost entirely with household spending habits. For most of last year, households went into hibernation, thanks to the pandemic-induced lockdowns, and so did the economy, which suffered its worst contraction since the Great Depression. Personal consumption plunged by a record 3.9 percent, as more than 9 million workers lost their jobs and households, confined to their homes, had limited spending choices beyond what could be bought online. Most of the copious income support the government provided through transfer and direct stimulus payments were either saved or used to pay down debt.

This year it’s an entirely different story. With the accelerated pace of 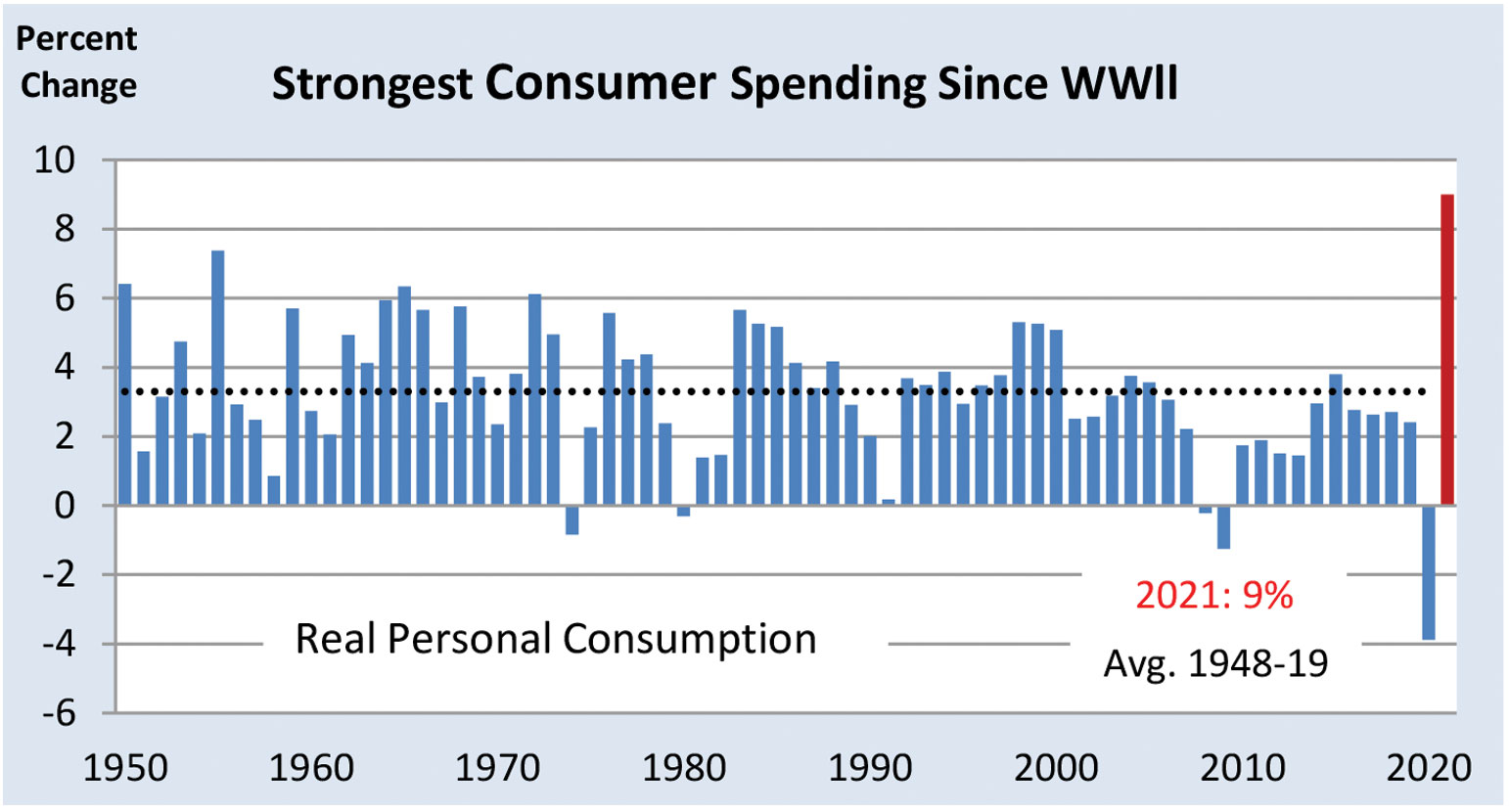 vaccinations and falling case counts in the U.S., lockdown restrictions have eased and households came out of their bunkers. Armed with the accumulated savings from 2020 and fueled with two more rounds of stimulus checks in December and again in March, Americans are going on a spending binge. March was a breakout month, highlighted by an astonishing 9.8 percent surge in retail sales, the second largest monthly increase on record. The gain in outlays was as broad as it was steep, as consumers spread their purchases among all retail sectors.

The March explosion is just the beginning of a spending spree that will likely continue for at least several more months. Despite the torrid spending that month, American consumers have barely dented the enormous financial firepower still in reserve. Over the course of the past year households accumulated about $1.5 trillion in excess savings as income, fueled by massive government transfer payments, grew considerably faster than consumption. The latest round of stimulus payments, which reached the bank accounts of nearly 200 million Americans in late March, adds another layer of purchasing power that will course through the economy as businesses continue to reopen. We expect that consumers will post the strongest increase in spending this year than any time since the end of World War II.

Not surprisingly, the spending boom now underway is leading employers to ramp up the pace of hiring, setting the stage for a jobs boom this year. While considerable progress has already been made towards bringing back the 22.4 million jobs lost at the height of the pandemic last March and April, there is still a long hill to climb before the job market is restored to health. In March, there were still 8.4 million fewer workers drawing paychecks than just before the pandemic hit last February. Most likely, that shortfall narrowed significantly in April following another month of expected large job gains.

Indeed, a growing number of businesses are reportedly having trouble filling open positions. That’s particularly the case for small businesses, where the percent of owners claiming they have at least one unfilled open position has surged to the highest level on record, according to the latest survey by the National Federation of Independent Businesses. This apparent shortage of workers conflicts with national data that portrays a high level of unemployment and considerable slack in the labor market. It also conjures up a litany of explanations, all of which have some degree of truth.

For example, while employment in March was 8.4 million below the pre-pandemic level, some fraction of those workers may not want to return to their jobs for health reasons, fearing they might get Covid-19. Others might be deterred from returning due to the lack of childcare options where schools haven’t reopened yet for in-person learning. This is particularly a constraining force on women who are returning to work at a much slower rate than men. Some also believe that generous unemployment benefits are making poorly-paid work less appealing, encouraging low-wage workers to stay away.

No doubt, all of these influences are impeding the ability of some firms to find workers. But to say that this reflects a tight labor market would be an extreme exaggeration. At best, the recovery is incomplete, with only 60 percent of the job losses during the pandemic recovered. That shortfall is even greater when you consider the jobs that would have been added each month if the pandemic never occurred. At worst, this is a two-track jobs recovery that is leaving many behind, often permanently.

One key difference between the pandemic recession and earlier downturns is that the earlier ones disproportionately affected middle- and high-income earners. The coronavirus recession, however, has had hit low-wage and minority workers with unprecedented force. Indeed, the pace of job destruction among low-paying industries has been 13 times greater than at the depth of the Great Recession. By contrast, workers in middle and high-wage industries have faced labor market conditions comparable to past recessions. Worse, one year into the pandemic recovery, low-wage workers continue to suffer disproportionately. Employment in low-paying industries is still 9.4 percent – 4 million jobs – down from its pre-pandemic level, twice that for middle-paying industries and three times more than the highest paying industries.

Looking across racial groups, Black and Hispanic workers suffered outsized job losses from the pandemic compared to white workers, and they’re lagging in the recovery. As of March, Black and Hispanic employment was still 6.5 percent and 5.3 percent below their pre-pandemic levels, respectively, compared to 4.9 percent for white workers. The gap in the unemployment rate between minorities and the white population is equally as wide. The good news is that the demand for workers in the service sector, which is the biggest employer of minority workers, is ramping up as the economy reopens and spurring faster wage increases for this group.

The Fed Will Stay Supportive

Assuming no major setback in the health crisis from encroaching variants or vaccine hesitancy, the consumer-driven economic boom now unfolding will create a jobs boom. We expect that the economy will generate 8 million jobs this year, with the unemployment rate falling to below 4 percent by next year. That would bring us almost back to where we were just before the pandemic, marking a swift recovery in jobs from a recession. It took the Great Recession five years for the economy to recover all of its job losses.

But as we have shown, the recovery of pandemic-related job losses is only one facet of the healing process. Progress will need to occur in a broad and inclusive way for the economy to reach full employment. Happily, the breadth of the labor market recovery will also improve this year as low-paying industries are leading the hiring spurt. That, in turn, is enhancing job prospects for minority groups and other marginalized workers who have borne the brunt of the pandemic recession, many of whom still are on the sidelines.

Some fear that the Federal Reserve would abandon its supportive

monetary policy before that goal of maximum and inclusive employment is reached. In the past, the Fed has raised interest rates preemptively in the face of rapid growth and falling unemployment to stave off an inflation outbreak. That’s not likely to occur this time, as the current monetary regime is highly sensitive to the inequalities that have opened up during this unprecedented recession, as well as the uneven recovery on the jobs front that has taken place so far. No doubt, with the formidable assist from trillions of dollars of fiscal stimulus, the inflation risk has risen. But the scars from the pandemic are still palpable and the greater risk is that they will become more deeply entrenched and more difficult to fix over time, whereas the Fed has the tools to stop inflation in its tracks. Choosing the appropriate time to shift gears will be the most difficult decision the Fed has to make over the next few years.