Don’t Fret – The Workers Will Come Back

Americans are as flexible as they are resilient, so it comes as no surprise that they are efficiently adapting to a post-pandemic world. For sure, the health crisis has not been entirely vanquished. Although more than 50 percent of the adult population has been fully inoculated, vaccine hesitancy, emerging variants, and greater social interactions could still lead to a rise in Covid infections. That’s the greatest risk facing the economy, one that would certainly stymie the torrid rebound in growth that is now underway. 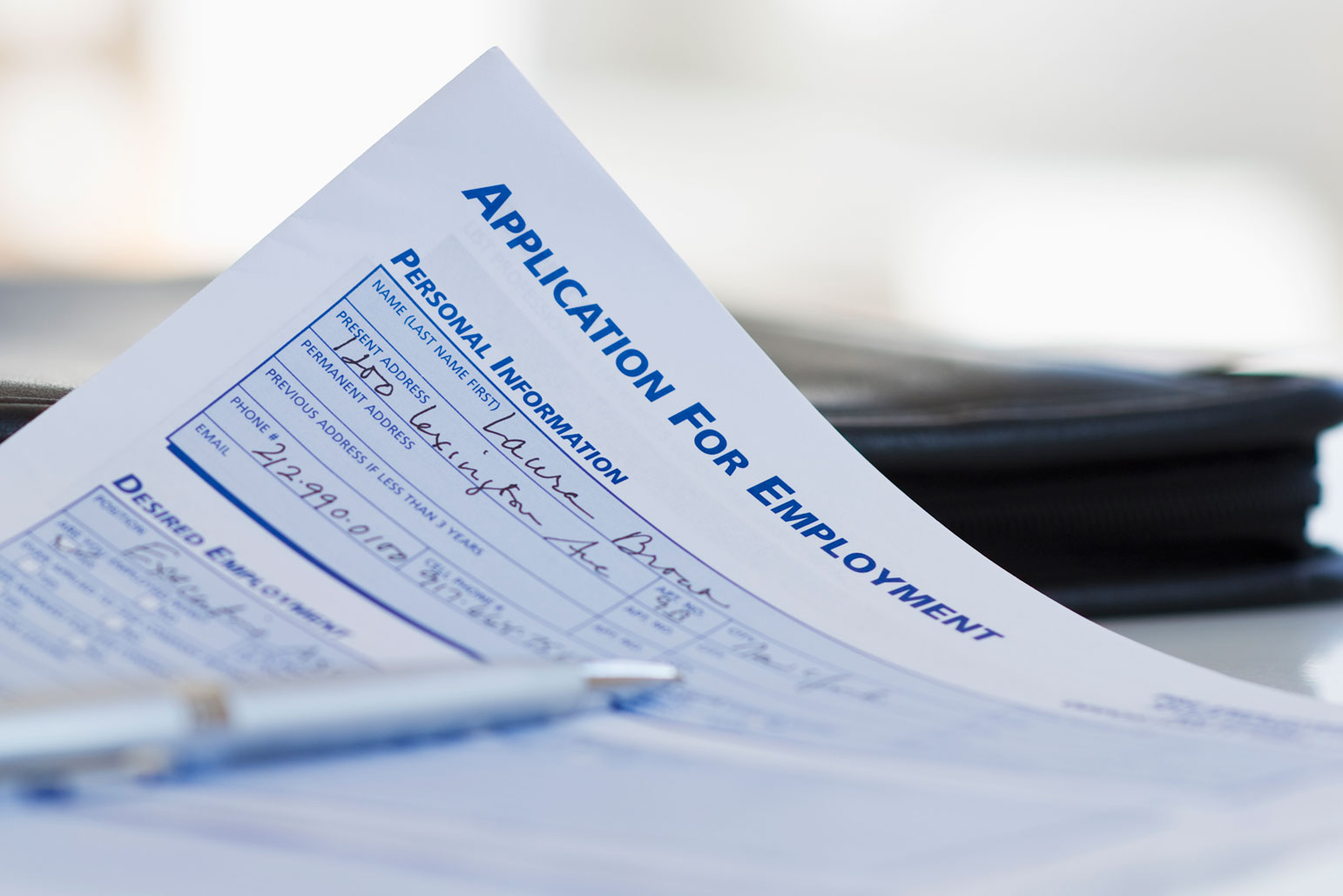 That said, the remarkable progress towards ending the health crisis has reopened the U.S. economy, and Americans are wasting no time getting back to their old spending habits. Bars and restaurants are once again humming with customers, travel agents are feverishly booking trips for eager vacationers, hotel vacancy rates in many states are back to near normal, and fans are flocking to sporting events. Spending on these socially involved activities had been put on hold since the pandemic began last March, resulting in more than $2.5 trillion in excess savings that is now being used to satisfy pent-up demand. This savings windfall occurred because incomes continued to grow throughout the pandemic despite huge job losses, thanks to generous government transfer payments, including three rounds of stimulus payments.

The combination of pent-up demand, excess savings, and a recovering job market is setting a fire under the economy, which is poised to deliver the strongest annual growth since 1983. While consumers, flush with funds, are driving the growth engine, housing activity and business investment are also making strong contributions. But all of this re-opening is happening too quickly, as the economy is struggling to keep up with demand. In time-honored fashion, when too much demand overwhelms supply, prices perk up, stoking inflation. The inflation spike now underway is one sour note that is tarnishing an otherwise cheerful revival. Many are wondering if the Federal Reserve is allowing the party to run too long and too hot. The Fed does not think so, but a lot is riding on its judgment.

The inflation spike in recent months has amplified a heated debate among economists. Some believe the powerful combination of massive fiscal stimulus and a turbo-charged easy monetary policy has planted the seeds for a sustained pick-up in inflation that will require the Federal Reserve to slam on the brakes, sending the economy into a recession. Others dispute that notion, asserting that the inflation pick-up in recent months is the result of temporary pandemic-related forces that will soon unwind and restore a balance between demand and supply, bringing about lower inflation. 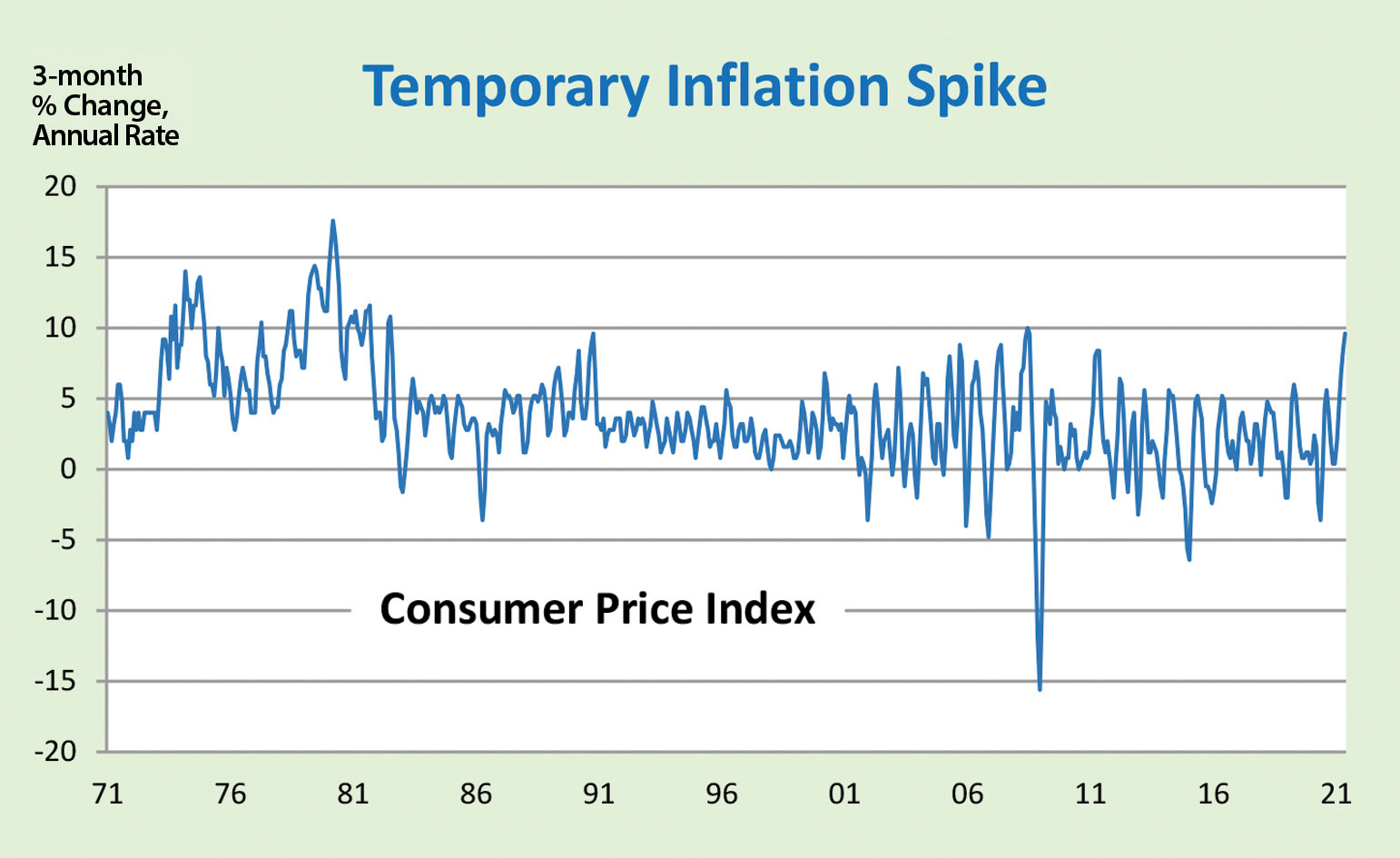 time, the latest data on consumer prices has stoked the controversy. Following more than two decades of calm inflation, a seismic upheaval has suddenly appeared. Over the past three months, consumer prices have risen at an annual rate of 9.6 percent; except for the oil-led surge in 2008, that equaled the steepest three-month increase since the tail-end of the hyperinflation years of the 1970s and early 1980s. While a pick-up was expected, and no one sees a repeat of that disastrous era, the acceleration has exceeded expectations and lured more economists into the hawkish camp.

Not surprisingly, the burst of inflation has caught the Fed’s attention. At its latest policy meeting that concluded on June 17, Fed officials moved up the timetable for a rate lift-off. Instead of waiting until 2024, which was the plan  at the March meeting, most Fed officials now expect to lift rates in the latter half of 2023 from its near-zero level. Before that happens, the Fed expects to start reducing the amount of liquidity it is pouring into the economy through government-backed bond purchases, currently at $120 billion a month, a process known as quantitative easing. A more formal announcement of this so-called “tapering” is expected at the annual Jackson Hole symposium later this summer, a confab that includes major central bankers from around the world.

Of course, the Fed is not flawless in predicting the timing of rate increases. Indeed, Fed chairman Powell emphasized at his post-meeting press conference that the expected rate changes are just estimates by Fed officials based on their outlook for the economy and inflation. These estimates are made every quarter, and a lot can happen over a three-month period that can alter their thinking. The less dovish turn at the latest policy meeting comes on the heels of a faster pick-up in inflation than expected as well as a stronger rebound in economic activity in recent months. Against this backdrop and, importantly, the more rapid vaccination coverage than expected, the central bank revised up its forecast for growth and inflation, justifying its earlier estimates for rate hikes.

That said, Powell also stressed the importance of being humble as a forecaster, especially in the current unique situation. Critics assert that he is moving too slowly to start pulling in the reins and risks falling behind the inflation curve. Waiting a year to start raising rates allows inflation to build a head of steam, which would then require even steeper growth-killing rate hikes to stem the tide. However, the Fed has two mandates: to achieve maximum employment and stable inflation that averages 2 percent over time. Although inflation is overshooting the target now, Powell expects it to recede towards 2 percent when transitory forces related to pandemic disruptions subside later this year and next.

Importantly, the employment mandate remains unfilled. The unemployment rate stood at 5.8 percent in May, considerably above the pre-pandemic level of 3.5 percent and there are still 7.6 million jobs lost during the height of the pandemic that have not been recovered. What’s more, recent job gains, although sturdy by historical standards, have fallen short of expectations, given the robust increase in output in the second quarter. In contrast to previous Fed regimes, which would have stamped out inflation proactively at the first sign of a flare-up, the current slate of policymakers is more concerned about choking off the recovery before the millions of sidelined workers can rejoin the workforce. Powell is keenly aware of the extended length of time it took to reach full employment following the last recession, and the fact that inflation remained tame even after that point was reached. However, the unique forces impacting the current job market raise the question; is the Fed fighting the last battle that requires a different approach this time?

Where Have All The Workers Gone?

The Covid crisis and the complex reopening of the economy have yielded some unusual patterns in the labor market. True, there are 7.6 million fewer workers drawing paychecks than there were before the pandemic hit in February 2020 and, as noted, the unemployment rate stands well above pre-Covid levels. Yet, there were also a record 9.3 million job openings in April according to the latest Labor Department data, and talk of labor shortages is everywhere. Not only are companies struggling to fill open positions, they are having trouble holding on to existing workers. Individuals are quitting jobs at a record rate, reflecting increased poaching by other employers competing to attract qualified workers. 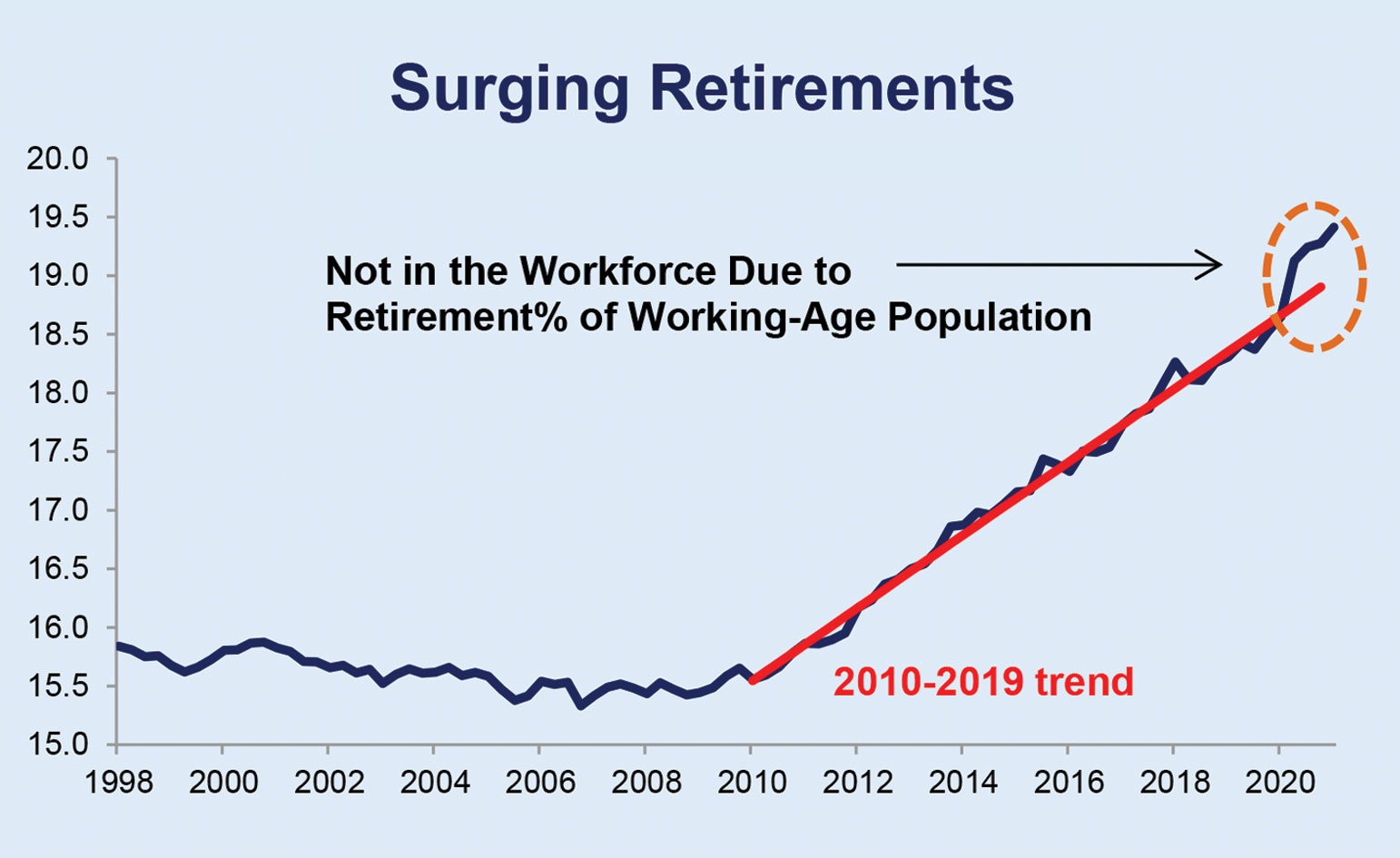 Clearly, a labor shortage seems like a paradox in an economy still counting 7.6 million fewer jobs than before the pandemic – a shortfall nearly as large as at the height of the Great Recession. One reason: People are dropping out of the labor force. As of May, the labor force participation rate regained only 45 percent of the pandemic drop, with 3.5 million more people out of the workforce than in February 2020. Hence, while about one half has returned, the other half continues to sit on the sidelines due to a combination of pandemic-related constraints.

We see four possible factors currently holding back the labor supply: Lingering health concerns due to the risk still posed by the virus; persistent child care disruptions, as shuttered schools have shifted more caregiving responsibilities onto parents who otherwise might take a job; a wave of early retirements, boosted by well-cushioned 401 (k) accounts; and generous unemployment benefits, which reduces the incentive to return to a low-paying job. While the Federal Reserve can do nothing to relieve these constraints, there are reasons to believe most of them will gradually ease on their own in coming months and facilitate the return of workers to the labor force.

With vaccinations in full swing – the administration expects 70 percent of the population to be fully vaccinated by the fall – virus fear should gradually recede, and so too should lingering health concerns that are keeping many individuals out of the workforce. Importantly, a growing share of children are likely to get vaccinated ahead of the new school year; as schools fully reopen in the fall, the burden of child care should ebb and free up parents, particularly women, to resume a job search.

Although research is mixed as to whether generous unemployment benefits deter people from seeking work, wide-spread reports from businesses around the country strongly suggest that they do. Smaller firms seeking to fill low-paying jobs are particularly victimized in areas where the benefits are greater than workers can earn in these positions. But 26 states have terminated the program that provides enhanced payments of $300 a week ahead of the scheduled September 6 expiration date, which eliminates 4 million individuals immediately. How many of the workers in this pool will now re-enter the labor force remains to be seen, but the cut-off should boost the labor supply to some extent. 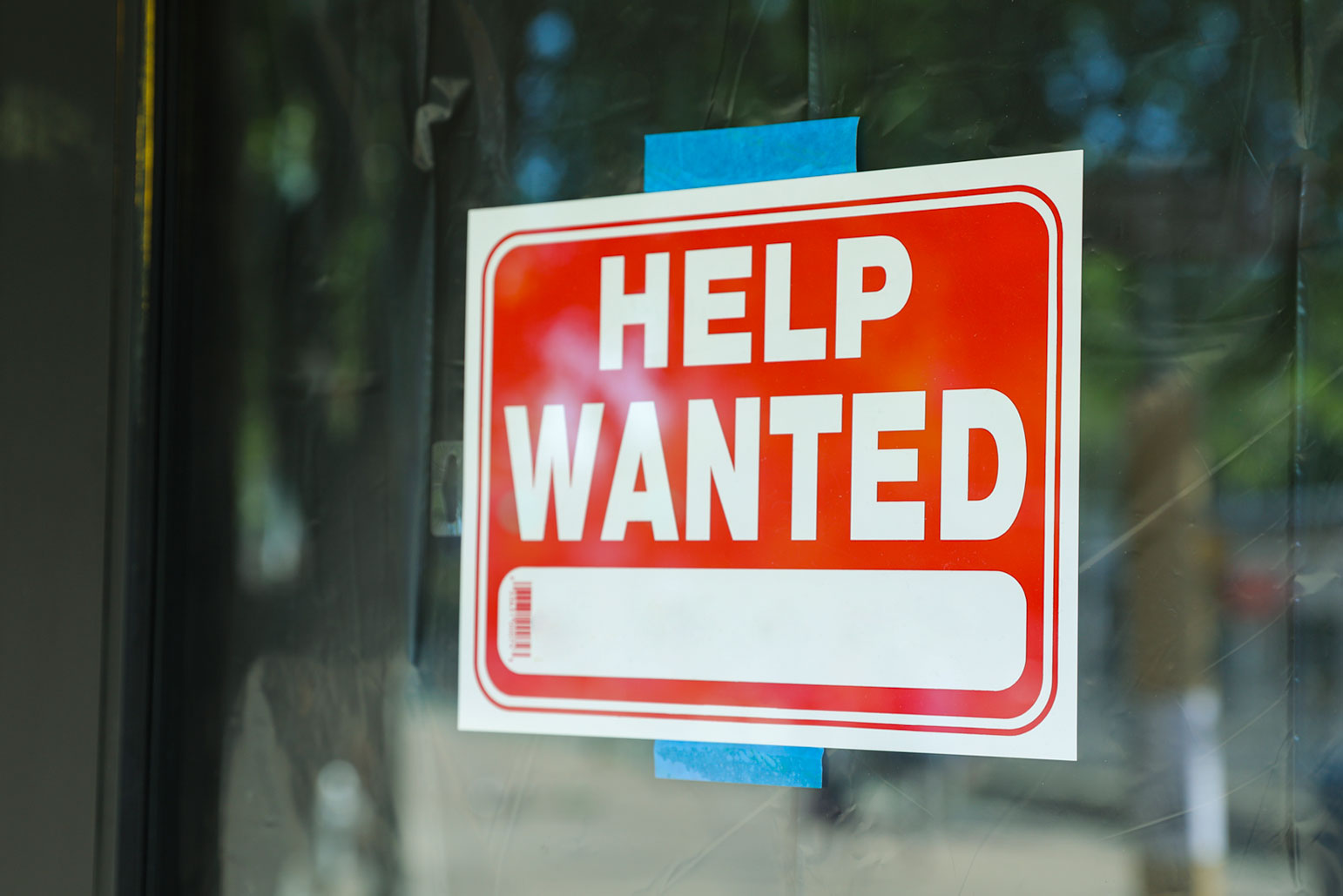 of early retirements of aging baby boomers; not only have many enjoyed substantial gains in assets over the past year, but senior workers are more susceptible to health risks and have a lower ability to telework compared to younger workers. Historical data indicates that once an individual has entered retirement, the odds of returning are slim. No doubt, higher pay would entice some early retirees to come back, even as it lures other workers off the sidelines. Although this would undoubtedly stoke inflation concerns, higher wages and getting marginal workers back to the job market are precisely what the Fed is aiming for before it starts lifting rates. 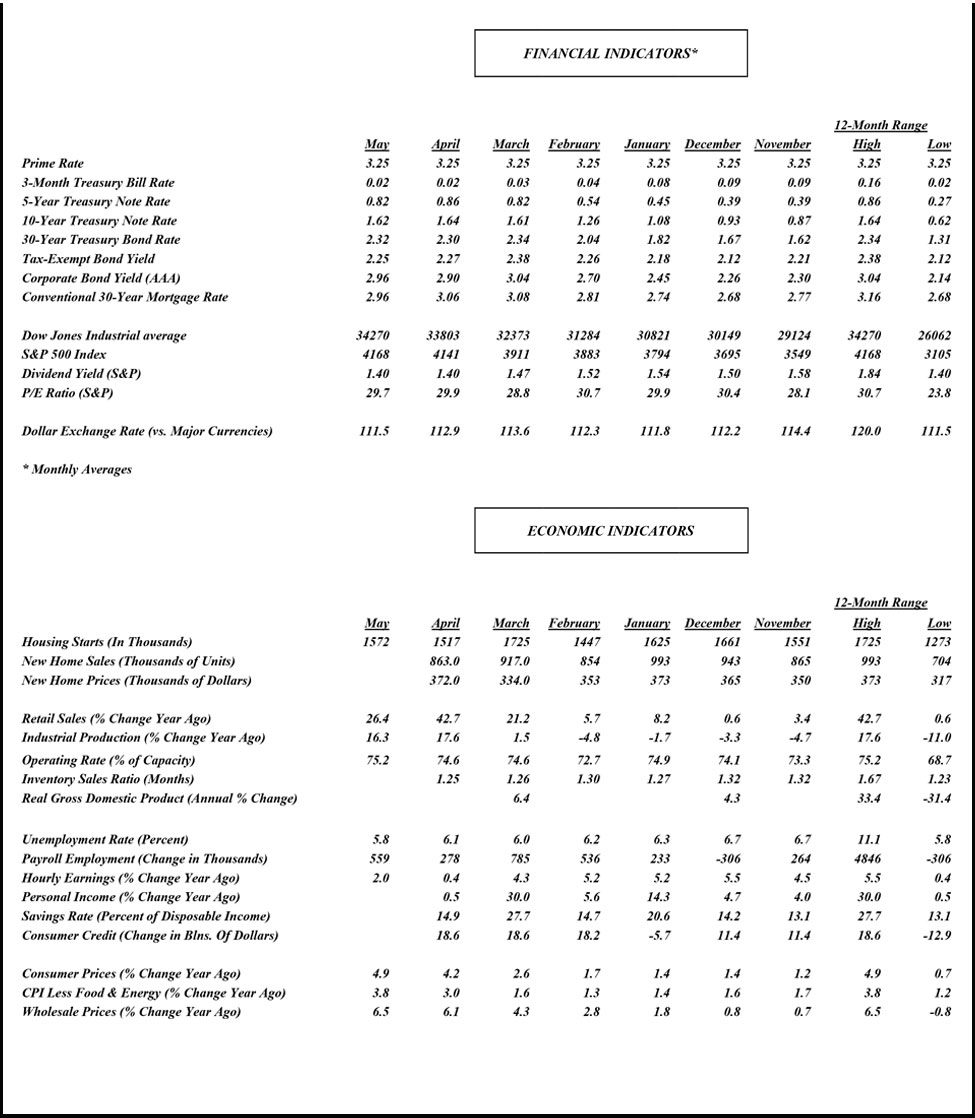