A Calmer But Durable Recovery Ahead

The economy just finished the second quarter coming off the second strongest growth rate since 1978.  The powerful post-pandemic reopening boost is still unfolding. But the rapid reopening has brought with it a host of problems, highlighting the fact that the road to normalcy is unlikely to be smooth. Thanks to labor shortages and supply-chain disruptions, the nation’s output is not keeping up with demand, resulting in consumer prices that are rising far more quickly than expected. Over the last four months, the consumer price index has increased at the fastest annual rate since the early 1980s. 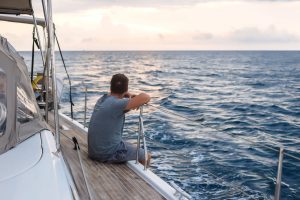 That inflation flare-up, in turn, has put the Federal Reserve on the hot seat, prompting heightened calls for it to begin leaning against the inflation tide before it spirals out of control. The Fed is resisting that call – for now-believing that increased price pressures reflect transitory forces linked to the pandemic that will soon recede. Instead, policy makers are more focused on restoring the labor market to full strength, as there are still 6.8 million missing jobs compared to the pre-pandemic level. The concern is that a premature tightening could stifle the recovery, leaving an army of job-searchers on the sidelines.

Meanwhile, the economic recovery may be facing a more imminent threat than either inflation or a possible policy mistake. While about 60 percent of the adult population is inoculated, vaccination rates have slowed and Covid-19 cases are once again on the rise. The Delta variant is spurring the revival, and is now the dominant form of new cases. Although the national infection rate is still low relative to last year, it is staging meaningful increases in several states with low vaccination rates – and the Delta variant is more contagious than the original virus. With loosened travel restrictions allowing for more mobility, the case counts could readily spread more widely. It’s unlikely that a new round of severe lockdown restrictions is imminent, but if health concerns spread it could well undercut household confidence and dampen spending behavior, something that would put a major crimp in the recovery.

The spring/summer revival in activity has been something to behold. Following the deepest contraction since the Great Depression during the height of the pandemic last year, few would have anticipated how strongly the economy would rebound. Recall that all the talk throughout 2020 was about a U-shaped or K-shaped recovery, the letters that portrayed either a prolonged languid upturn or a two-pronged recovery in which the rich got richer and the poor became poorer. Those perceptions, however, clearly underestimated the magnitude of the government stimulus that Washington would provide, or the powerful thrust the stimulus would impart to activity this year. 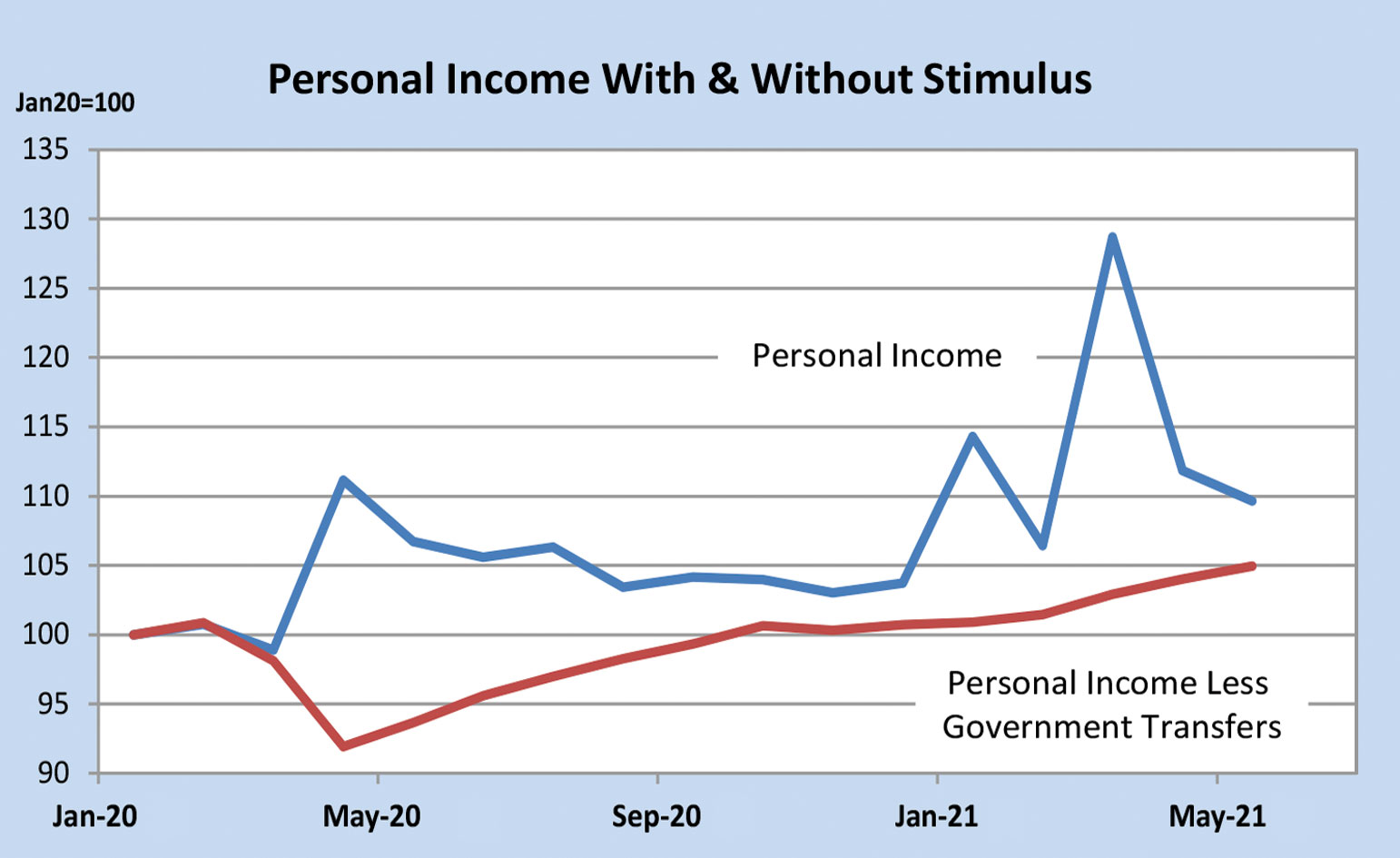 Indeed, in no other recession has incomes been as well supported by government transfer payments as was the case during the pandemic-induced downturn. Nearly $1 trillion in direct stimulus checks flowed into household bank accounts, with the last of three installments sent out in  March. Without those payments and other stimulus measures totaling more than $5 trillion, personal incomes would have edged up by less than 3 percent instead of the actual 29 percent in the year through March. That made a huge difference in terms of household spending power, enabling millions of people – including those who lost their jobs – to put food on the table, pay their rent and utilities, and keep current on bills.

Importantly, since most Americans were stuck in their homes, a good portion of those funds went unspent; more than $2 trillion was left on the table that would otherwise have been used to purchase goods and services. The personal savings rate leaped to over 30 percent last April, a record high, and most of the delayed spending was for services that were shut down during the pandemic. Not surprisingly, those pent-up savings are now being eagerly spent on services – travel, dining at restaurants, sporting events, concerts and other recreational activities – that are reopening with the removal of pandemic restrictions.

Supply Constraints Have Many Causes

But the fiscal muscle that pumped up demand could not do the same for supply. For a variety of reasons, businesses have not ramped up output as rapidly. The main reasons frequently cited are purely involuntary. Supply chain disruptions prevented companies from obtaining critical components needed for production. The auto industry has been particularly victimized, as a scarcity of computer chips is crimping production and driving up prices on vehicles, (both new and used). That shortage is now buffeting producers of smart phones and other electronic devices that rely heavily on chips. In addition, a shortage of shipping containers and bottlenecks at key ports are slowing the delivery of goods to retailers, which exacerbates the mismatch between demand and supply. 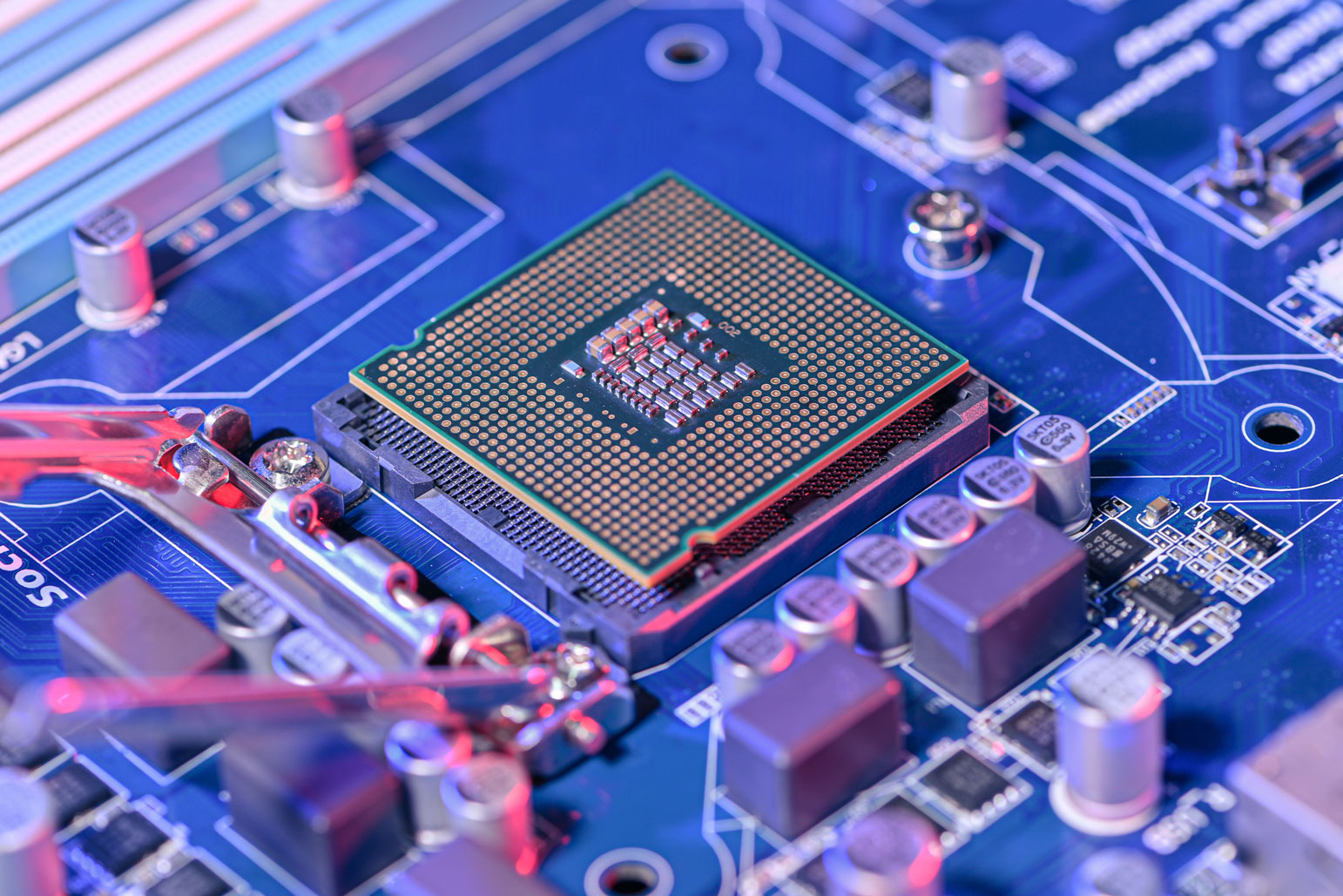 While goods producers are struggling to obtain parts for production, service providers are finding it difficult to hire workers to keep up with demand – at least at the wages they are willing to pay. At last count, there were a record 9.2 million jobs waiting to be filled, with the biggest worker shortfall in low-paying sectors, such as leisure and hospitality. Predictably, wage growth among this group has accelerated recently, but the effort to lure workers off the sidelines is falling short. Many are choosing to stay away due to child care responsibilities, lingering health concerns or prefer to collect unemployment checks a while longer.

But not all the supply shortfall is due to pandemic related constraints imposed on producers. Companies are not short sighted but are well aware of the unpredictable after-affects of a major shock. They also know that the sugar high generated by the massive fiscal stimulus will not last much longer, and what comes after remains a question mark. Many businesses may hesitate to expand capacity to meet a short-term burst of demand, fearing they will be stuck with unused costly resources if the economy reverts to the slow growth path it was on in the decade leading up to the pandemic. According to a report by the Semiconductor Industry Association, it now takes as much as $20 billion to build a cutting-edge plant that may not run at full capacity in a year or so should the demand for chips weaken.

The reluctance to use the rearview mirror to plan ahead is understandable, given all the uncertainties that can make those plans go awry. The emerging Delta variant that is pushing up the infection rate looms as the biggest uncertainty, and needs to be monitored closely. This is something that firms can’t factor into their projections of future sales, not only because the path of the virus is difficult to foresee but also because the pandemic has altered household behavior in ways that may or may not be permanent. 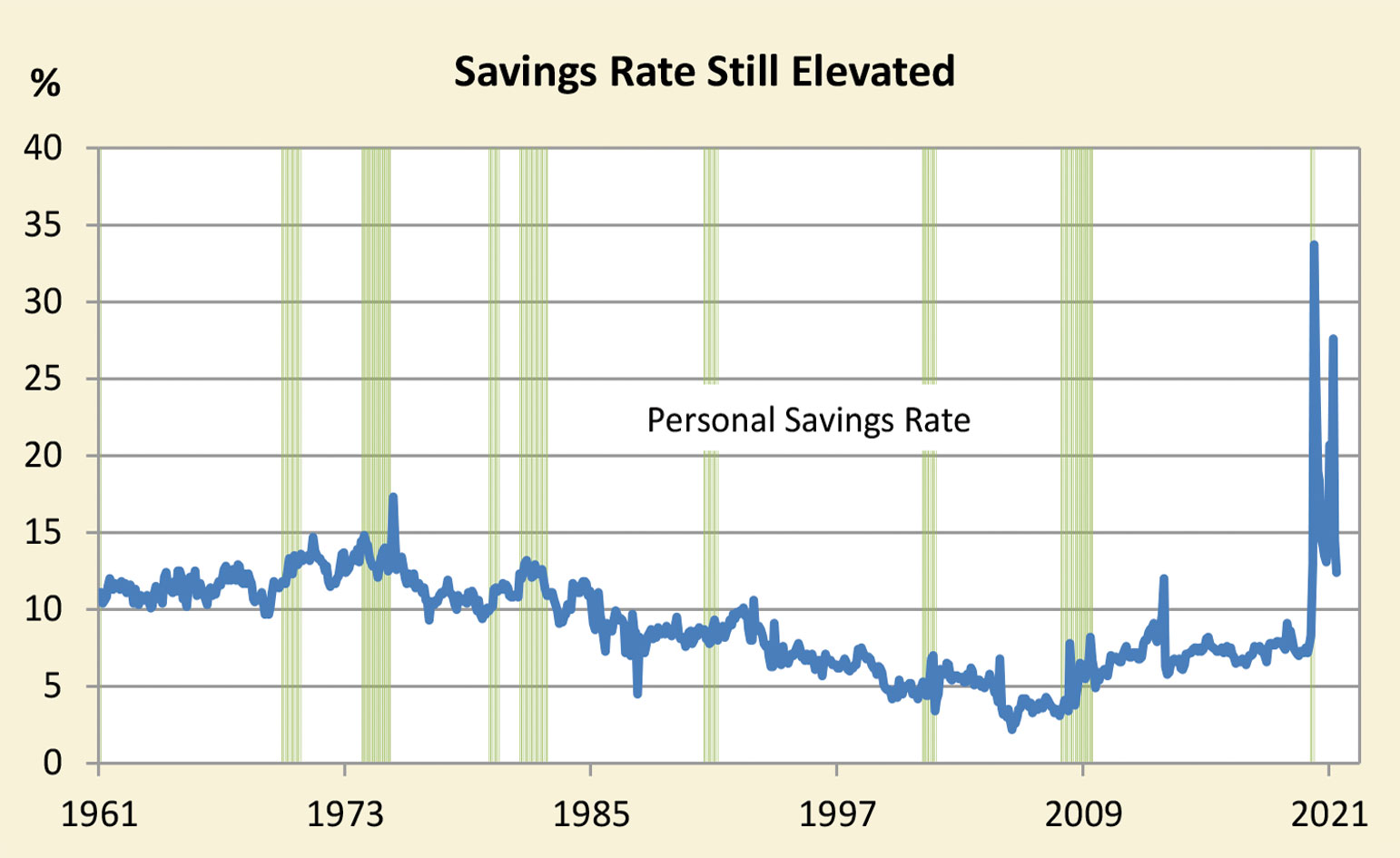 For example, people may not use their beefier wealth accumulated since the onset of the pandemic as they would have in the past. No doubt, the huge $25.6 trillion increase in net worth – reflecting soaring stock prices and home values – will have a positive impact on consumption. But the wealth boost may not be as large as before if the pandemic and lingering health concerns cause households to keep a larger financial cushion than otherwise. What’s more, the healthier balance sheets, including swollen 401(k) accounts contributed to a wave of early retirements among aging baby boomers. These new retirees are less likely to spend on frivolous big-ticket items than would younger adults who are still drawing paychecks, as they would need to stretch out their freshly gained wealth over a longer period of time.

Likewise, deferred spending during the pandemic has underpinned a vast build up of savings that is now being drawn on to help finance purchases. After hitting a record 33.7 percent last April, the savings rate has since receded to 12.4 percent in May, as the last stimulus payment sent out in March is no longer bolstering household incomes. Still, that’s more than double the rate that prevailed from 2000 to 2019. The question is, how much further towards the historical norm will the savings rate fall? If households draw it down to that level, the robust pace of consumer spending seen over the past half year will continue and power a vigorous pace of activity over the balance of the year. But the same reservations about accumulated wealth apply to savings as well. Will households decide to hold a larger balance of precautionary savings following two major shocks over the past dozen years dating back to the financial crisis? If so, spending going forward will be less robust than otherwise.

Make no mistake. The economy is still on solid ground as elevated savings, improved balance sheets and a recovering job market should all support a respectable pace of consumer spending. But the peak growth was probably recorded in the second quarter, when the fiscal thrust was at its strongest and rapid gains in vaccination rates lifted household confidence. Importantly, the easing of restrictions during this period also opened the doors for consumers to unleash a torrent of pent-up demand that had been under wraps during the pandemic.

There will probably be little loss of momentum in the current quarter, as consumers still have a lot of unsatisfied pent-up demands. People who delayed vacation plans are eager to travel, driving up bookings at hotels, airlines and cruise ships. Many have satisfied their demand for goods, which continued to sell strongly throughout the pandemic as consumers were able to utilize their Internet connections to make purchases online. Now a great rotation is underway, as household spending preferences are shifting from goods and services. The rotation should take some pressure off of goods prices even as it amplifies the demand for service workers, prompting faster wage increases in low-paying industries.

Assuming the health crisis does not significantly worsen and cause renewed restrictions, the recovery should continue, but at a slower pace  this year and next. Inflation pressures should also subside, as slowing growth enables supply to catch up with demand. The rebalancing, however, will take time and, hence, inflation will remain higher than it has been in recent years. The Fed will need to walk a fine line to keep inflation in check while allowing the recovery to continue. 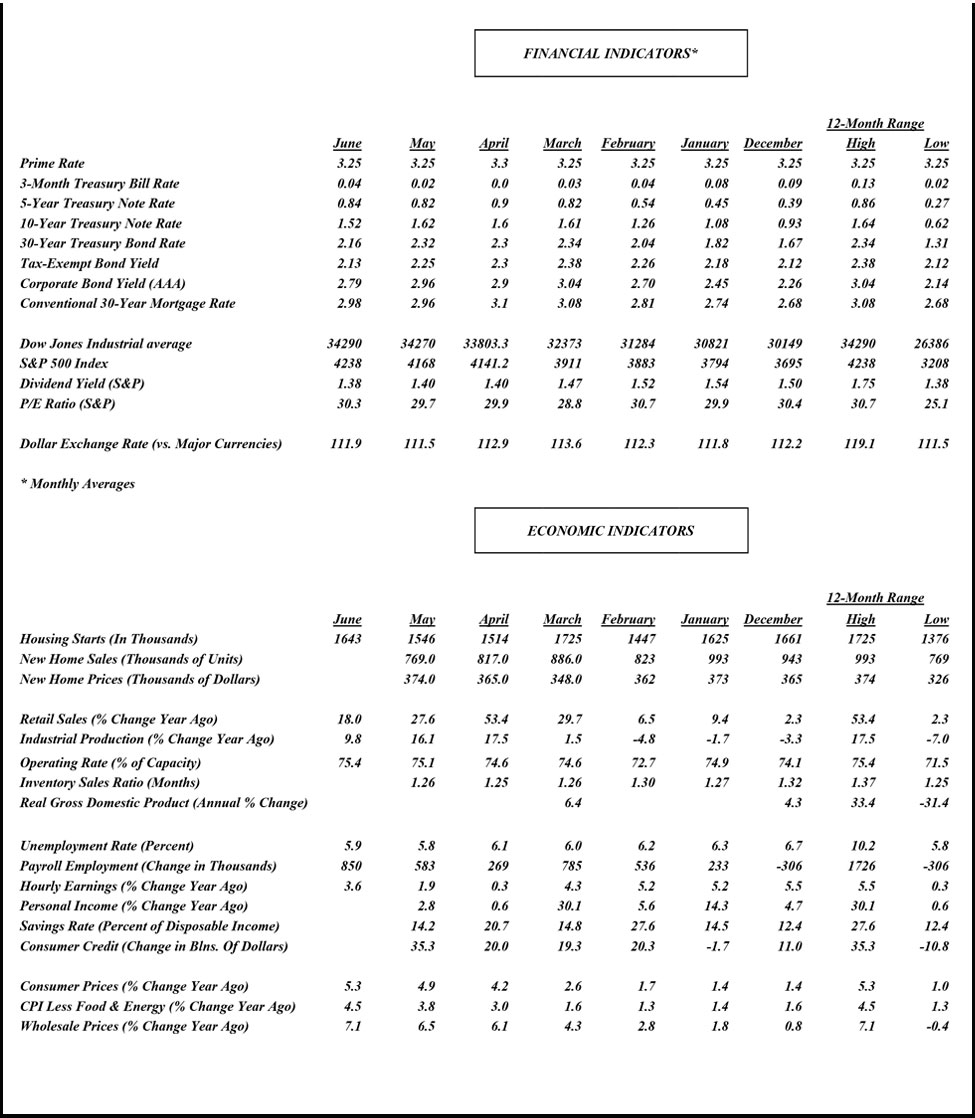