The US economy passed a key milestone in the second quarter as it more than recouped output lost during the Covid-induced recession. On the heels of a 6.5 percent increase, real GDP rose to $19.4 trillion in the April-June period, topping the $19.2 trillion that prevailed in the final quarter before the onset of the pandemic. The six-quarter turnaround is not particularly rapid compared to past recovery cycles – it’s about equal to the average time it took for the past nine recoveries to regain their pre-recession peaks – but it is impressive considering the depths the economy had to climb out of. The pandemic recession may have been the shortest on record, but it was also the harshest, sending output – and employment – plunging by the greatest amount since the Great Depression. 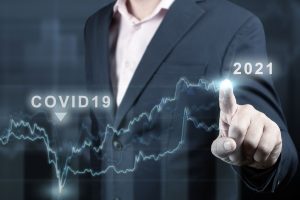 Applaud the achievement, but hold the champagne. Clearly, the US economy deserves much credit for its ability to recover from an unprecedented health shock that has cost millions of lives across the seven continents. But the accomplishment is far from complete; while lost output has been recovered, nearly 6 million workers have been left behind. What’s more, the gains, economic and financial, have not been shared equally. Indeed, the pandemic recovery has actually amplified the income and wealth inequality that prevailed prior to Covid-19.

While the pandemic wrought havoc on the American and global economies, it has also produced changes in the workplace and corporate boardrooms that could put the economy on a faster growth track than was the case prior to the pandemic. Companies have learned that operating with fewer workers in the office can actually be more efficient and lead to cost savings. The pandemic has also ramped up business spending on technology to offset worker shortages and increasing labor costs. While these productivity-enhancing changes portend stronger economic growth in the future, the near-term outlook has become murkier. The rapid spread of the Delta variant is already putting a dent in the recovery, even as inflation is roaring to multi-decades highs. How the Federal Reserve navigates these crosscurrents to keep the economy on an even keel is one of the more complex and important decisions in recent memory that the central bank will have to make.

Just as the 1990s capital spending boom and the onset of the Internet led to a brief, but powerful, boost in productivity growth, the pandemic has produced a mix of cyclical and structural changes that is having a similar effect. But unlike the quick setback in productivity growth in the mid 2000s, there is every reason to believe that the current acceleration will outlast the pandemic. For one, the workplace environment has fundamentally changed, as a hybrid system of remote and on-site work is here to stay. To the surprise of many business leaders, this system has actually helped rather than hindered productivity. Indeed, the observation earlier in this commentary starkly highlights this point, as the economy is now generating as much output as before the pandemic but with 5.8 million fewer workers.

For another, despite nearly 6 million missing jobs, businesses are struggling 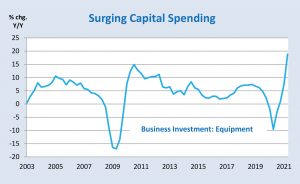 to fill open positions, which soared to a record 9.3 million in June according to Labor Department data. This struggle, in turn, has prodded companies to rapidly adopt labor-savings technologies to generate output, including investing in more capital equipment and accelerating efforts to adopt new technology. Business spending on capital equipment and intellectual property, including software and R&D, has surged since the onset of the pandemic. The fruits of these investments will unfold over a period of years, but they have already injected an upside shock to productivity.

That said, the positive impact of technology on productivity, particularly in the short-term, carries with it some pain for workers. Recent studies show that the rapid adoption of labor-savings innovations could adversely affect employment in a wide swath of industries. We estimate that nearly 50 percent of the 5.8 million jobs (relative to pre-pandemic levels) are vulnerable to automation, particularly in high-contact industries involving routine tasks that can easily be automated, such as food preparation and serving, retail sales and manufacturing. Not coincidentally, these are the very sectors that are struggling the most to fill job vacancies.

Business efforts to ramp up productivity began before the Covid crisis, reflecting  global competition and demographic trends, such as the aging population – there is little question that the pandemic has accelerated the trend. A McKinsey Global Institute survey conducted in October 2020 found that companies digitized many activities 20 to 25 times faster than they had previously even thought possible. Likewise, a survey conducted by the World Economic Forum found that more than 80 percent of business executives are accelerating plans to digitize work processes and deploy new technologies; and 50 percent of employers are expecting to accelerate the automation of some roles in their companies. 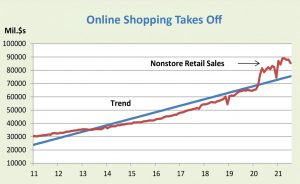 It is important to note the impetus for a sustained increase in productivity growth is occurring in industries with tradition-ally weak productivity and where there is considerable scope to accelerate the use of technology, such as healthcare, retail and warehousing. Before the pandemic, the healthcare sector lagged many other industries in the adoption of digital technologies. However, in response to the pandemic, the healthcare sector rapidly implemented new technological tools to allow healthcare to be delivered remotely. What’s more, the pandemic-induced increased use of telemedicine is likely to outlast the crisis. In the US, 76 percent of patients expressed interest in using telehealth in the future, which should boost productivity as health professionals are able to see more patients a day.

The Downside of Productivity

The Covid crisis and the complex reopening dynamics it has produced have given way to an unprecedented mismatch between jobseekers and vacancies in the US labor market. As noted earlier, the number of job openings has surged well past pre-pandemic levels to a record of 9.3 million, which actually exceeds the number of unemployed individuals. What’s more, the labor mismatches are felt most acutely in industries that have been the hardest hit during the pandemic, such as leisure, hospitality, and manufacturing. These hiring strains are enticing companies to invest more in labor-saving technologies such as automation, especially labor-intensive industries where work tends to be repetitive.

Unfortunately companies’ adoption of labor-saving innovations could adversely affect employment as robots and other technologies perform tasks formerly done by workers. This displacement effect is more likely to impact lower- and middle-class workers who tend to perform more routine and manual jobs. For instance, self-checkouts at supermarkets have reduced the need for employees, and the use of robots in industries such as autos have displaced certain labor-intensive tasks of factory workers. Recent research found that each new industrial robot eliminates 1.6 manufacturing jobs on average, with the toll falling disproportionately on lower-skilled workers.

The worker shortage that is driving companies to adopt labor-saving technology has produced a conundrum that is not easily resolved. On one hand, the fierce competition among companies to fill open positions is driving up wages, particularly in low-wage industries where the worker shortage is most acute. This is clearly a positive development for low-wage workers whose incomes have trailed the growth in upper-income groups. On the other hand, the acceleration in wages is spurring companies to speed up the automation of jobs as much as possible, a response that will eventually push more workers to the unemployment lines. What’s more, rising wage inflation could prompt the Fed to tighten policy sooner than otherwise, which might short-circuit the recovery before all of the 5.8 million missing jobs from the pandemic are restored. 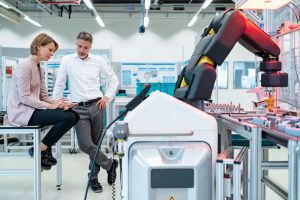 that the Fed will be coping with over the next several months. No one expects it to start a rate-hiking campaign aimed at choking off growth, but the process of removing some of the massive monthly liquidity injections through asset purchases should begin soon. With Covid cases, led by the Delta variant, surging once again and cutting deeply into household confidence, the economic outlook is too uncertain for a more drastic policy shift.

The best case scenario over the near term is that rising vaccination rates brings the Delta variant under control, preventing growth-stifling business restrictions and removing a key restraint on labor supply – health fears that are keeping workers from taking a job. Over the medium term, the dis-placement of workers by the Covid-induced increase in automation and other labor-saving technologies would hopefully be offset by the process of creative destruction.

This process, popularized by economist Joseph Shumpeter in the 1950s, asserts that productivity enhancements create new industries and new job opportunities that replace old jobs tied to outmoded operating methods. To some extent that is already happening as there’s been an explosion in entrepreneurial activity over the past year, highlighted by a surge in new business applications that should lead to the creation of new jobs in more innovative, higher productivity industries. 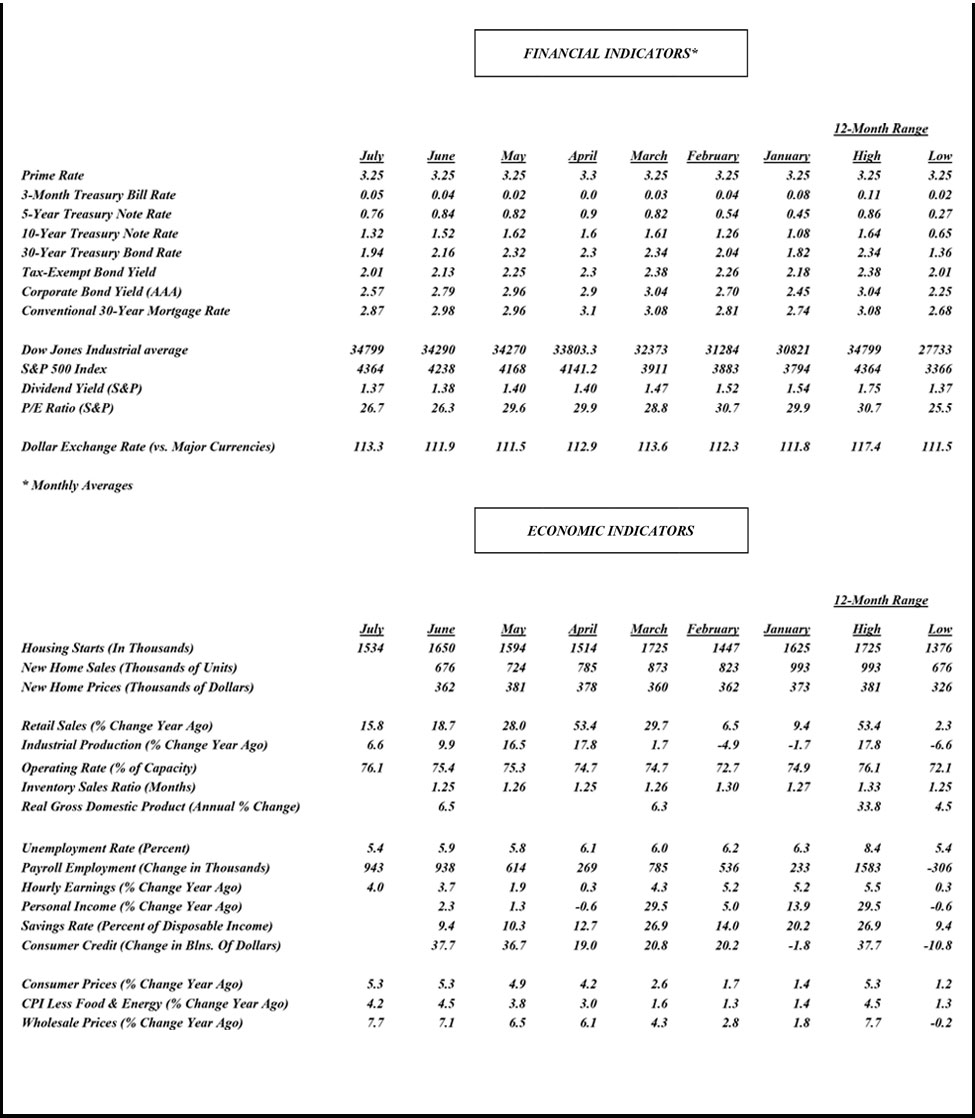