The U.S. Economy – A Delta Detour

The U.S. economy is past its fastest growth phase, but like a marathoner it still has plenty in reserve to continue the run. Until the Delta variant reared its ugly head it was thought that conditions would have returned to normal by now, setting the stage for a robust second-half sprint that carried momentum into 2022. The expansion still has legs, but instead of a sprint its pace is downshifting to a jog. The unwelcome revival of the fourth stage of Covid-19, spurred by the Delta variant, created a headwind that has taken some air out of the expansion. 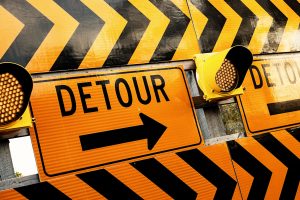 After posting a robust 6.6 percent growth rate in the second quarter, the economy likely advanced at a more sobering 3 percent pace or less in the just-concluded third quarter. That’s still respectable compared to the long-term trend, but far less than what policymakers hoped would unfold as the pandemic loosened its grip on the economy. Of course, government officials did not anticipate the resumption of rising case counts over the summer that put the kibosh on activity. Renewed health fears once again altered household behavior and spurred another round of business restrictions, although not as stringent as the ones imposed at the height of the pandemic last year. Still, consumers cut back spending during the summer and job growth slowed dramatically in August.

Needless to say, the economy’s performance going forward rests heavily with the path of the virus. The good news is that case counts seem to be peaking, albeit at high levels, and vaccination rates are still grudgingly climbing, particularly in states that have resisted shots in recent months as the rapid increase in deaths have persuaded more unvaccinated people to get inoculated; what’s more, an expanding list of businesses, prodded by President Biden’s mandate that all businesses with more than 100 employees get vaccinated or tested, should accelerate the trend. Assuming the health crisis continues to ebb, the third-quarter slowdown in activity should not be the beginning of the end of the expansion. The fundamentals underpinning the economy remain strong, setting the stage for a rebound in the fourth quarter and solid momentum lasting into the early months of 2022.

Households took a breather over the summer following a torrid spending spree in the second quarter when personal consumption leaped by 11.6 percent. How much of the pullback reflected the impact of the Delta variant is unclear, but the outright spending decline in July occurred alongside the rapid increase in case counts that undoubtedly prompted many consumers to forsake going to restaurants, bars, and shopping malls where in-person gathering heightens the risk of infection.

Still, households are learning to live with the virus and the July pullback turned out to be more of a hiccup than a retreat as spending bounced back in August. Rising virus fears may be curtailing some household activities but, unlike the first wave of Covid-19, they are not stopping consumers from shopping. The major difference this time, aside from a better tolerance of the virus, is that household purchasing power has been greatly enhanced by the $5 trillion in government transfer payments received since the onset of the pandemic. These payments more than offset the lost wages caused by the pandemic and enabled consumer spending to surge well above pre-pandemic levels and comfortably ahead of its long-term trend. 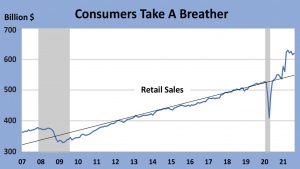 year. The larger issue has been supply constraints, which continues to be the biggest drag on the economy. Simply put, companies have been unable to stock their shelves with enough merchandise to satisfy customer needs. Globalization, despite all of its virtues, is the primary culprit. Goods made in factories thousands of miles away need to be shipped to the U.S., either to provide the parts necessary to complete production or to be resold in the retail market. The pandemic has taken as big, if not bigger, toll on overseas producers as it has here. The shutdown of ports and factories abroad has disrupted global supply chains and caused a severe shortage of goods in the U.S. The auto industry is a glaring example of this disruption, as the inability of producers to obtain much-needed computer chips, made primarily in Taiwan, has stifled auto production and vaporized the inventory of cars for sale.

Just as the ebbing of the virus would re-boot service-sector activity, so too will the restocking of inventories and jump-start growth in coming months. Inventory accumulations work just like any other spending, prompting suppliers to ramp up production and hiring to meet the restocking needs of customers. The boost from inventory rebuilding is already taking place, as manufacturing production has increased in three of the past four months and factories are now turning out more product than they were prior to the pandemic. Output would be even stronger if not for the shortage of semiconductor chips that continues to constrain auto production. In August, automakers were assembling 1.5 million fewer vehicles than they were when the pandemic hit in February 2020.

To be sure, the speed of the inventory-rebuilding process also depends on how easily goods can be imported from suppliers overseas, where the pandemic and other forces, such as adverse weather conditions, have also impeded output. But there too, progress on the health front can be seen as vaccination rates are increasing and case counts ebbing for most of our trading partners. Trade flows have picked up considerably in recent months, although the delivery of imported goods to customers is being delayed because of clogged ports, a shortage of workers to off-load cargo, and a diminished pool of truck drivers to transport the goods to their destination.

Indeed, the risk that businesses may not have enough merchandise on hand during the upcoming holiday shopping season may well prompt them to accelerate orders so that they are not caught short when the time comes. That, in turn, would not only make the shortages worse, as production is already struggling to keep up with demand, but it would also put further upward pressure on prices, reinforcing the inflation spiral underway since the Spring and putting more pressure on the Federal Reserve to tighten policy.

For its part, the Federal Reserve is betting that the supply shortages, bottlenecks, and stimulus-fueled demand that have spurred the inflation upsurge are temporary catalysts that will recede as the economy normalizes next year. But there is more disunity among Fed officials regarding the inflation outlook and how to cope with it than there has been in decades. The general consensus within the Fed is that it is almost time to start removing the emergency support to the economy in effect over the past 18 months, but the speed of the withdrawal and its starting date is still to be determined.

The reason for indecision is that the debate over inflation is as murky as ever. Policymakers are roughly divided between those certain that inflation has taken a significant shift upwards and those confident this is a transitory blip 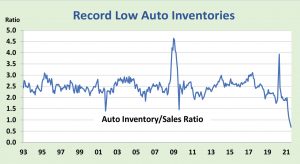 that is already simmering down. The available evidence can support both views. The 5.3 percent increase in consumer prices over the past year is a clear sign of the upward shift, as it far exceeds the 1.8 percent average in effect over the last 20 years. It is also well above the Fed’s inflation target of 2 percent.

But the monthly increases in the consumer price index are slowing and the pandemic-related supply disruptions driving up prices are not indefinite. Pent-up demand for goods have been mostly satisfied even as production is increasing, closing the gap between demand and supply. Some key commodity prices, such as lumber, have already plummeted back close to pre-pandemic levels, and consumers are beginning to resist higher prices. There are signs that the surge in new car prices is crimping demand, much like spiraling home prices is pushing some buyers out of the market.

Still, higher inflation is likely to stay around for a while, reflecting the lingering effects of supply constraints that won’t dissipate until transportation logjams clear up. In mid-September, a near-record 53 ships waited to unload at Los Angeles and Long Beach, the two largest U.S. ports which together receive 35 percent of U.S. goods imports. And owing to a chronic driver shortage, after cargo shipments unloaded, it has to wait nearly two weeks before it starts the journey to its destination, up from 3-4 days before Covid. As a result of these bottlenecks, shipping costs have increased 400 percent since the Covid outbreak.

And while some material costs, such as lumber, may be easing, labor costs are on the rise. This, of course, reflects a shortage of workers across a broad swath of industries, as a record 10.9 million positions remain unfilled. The huge job vacancy rate, particularly for low-paid service sector jobs, has given workers more bargaining power, which is driving up wages. Low-wage workers are unsurprisingly obtaining the largest wage gains, which is good for social harmony but bad for inflation. 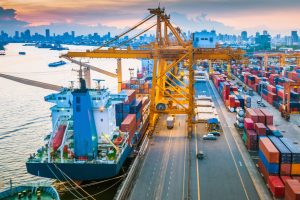 We suspect that these supply chain headwinds will persist, restraining activity and keeping inflation elevated, at least through early 2022. But as vaccination rates continue to expand globally and demand slowly returns to pre-pandemic patterns, transportation bottlenecks should gradually clear, input costs will normalize, and production and hiring challenges will recede. This virtuous cycle aligns with the Fed’s expectation that upward price pressures will also abate and inflation will gradually recede towards its 2 percent target. The question is, how much of a nudge from the Fed will be needed to bring this about? Just as monetary support for the economy is about to be withdrawn, so too is the stimulus from the fiscal side coming to an end. The best – and most likely – scenario is that the private sector will generate sufficient income through job growth to keep the expansion on track. But policymakers need to be careful not to derail growth by moving too fast. The fiscal cliff is baked in as the income support through stimulus payments and expanded jobless benefits are not likely to be renewed in a highly divided Congress. Hence, the Fed needs to decide how high it can lift interest rates without derailing the expansion while keeping inflation in check. The pandemic has made this difficult policy decision even more challenging.. 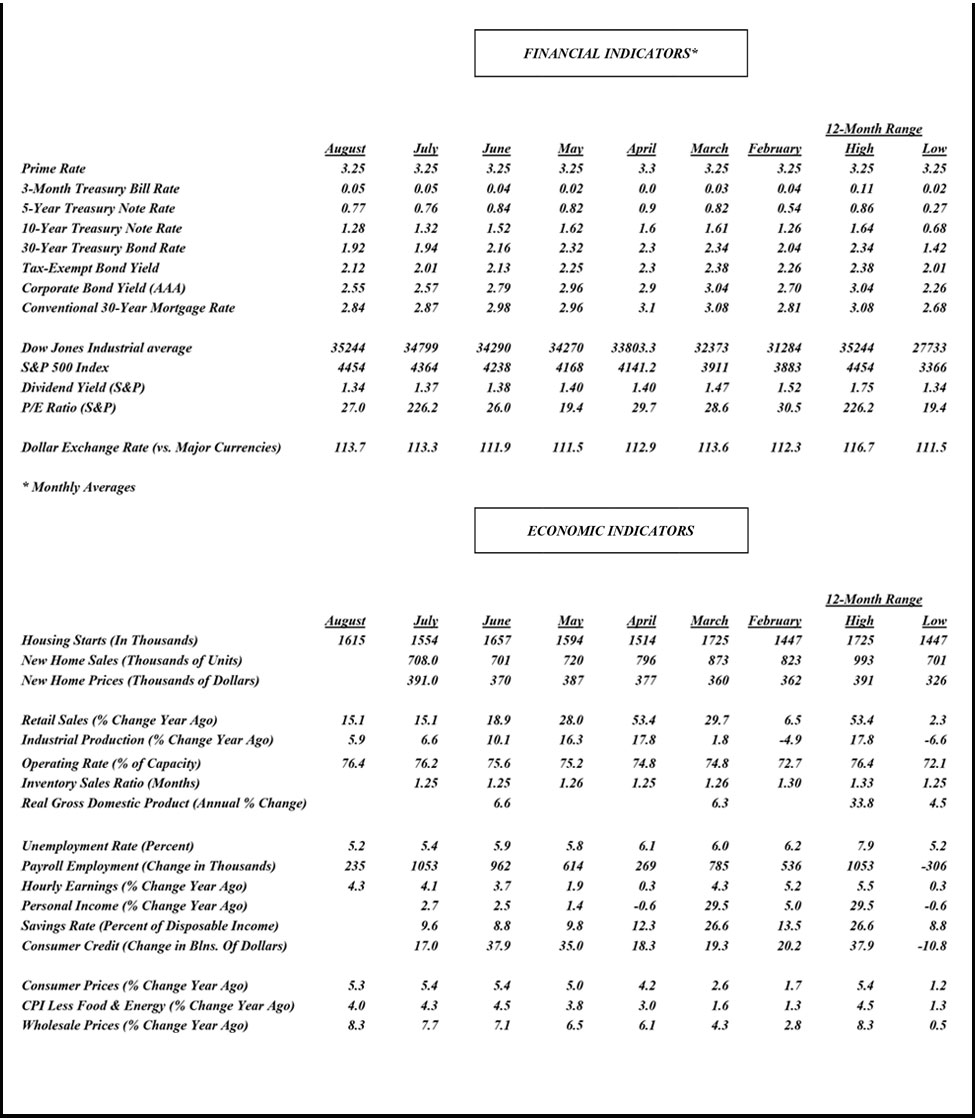