The U.S. economy is going through another rough patch, as supply shortages abound, workers are hard to find, and inflation is surging. Legislators are at loggerheads over the two major pieces of legislation that the White House is struggling to pass – the $1 trillion infrastructure bill and a much larger reconciliation package (the Build Back Better agenda). Another battle, lifting the debt ceiling, is poised to erupt again in a little over a month. Meanwhile, monetary policy is caught in the middle of an inflation upsurge and a supply-constrained slowing economy. Move too quickly to stifle inflation, and employment will suffer; move too slowly, and higher inflation could become more deeply embedded, pointing to harsher, possibly recession-inducing policy down the road. 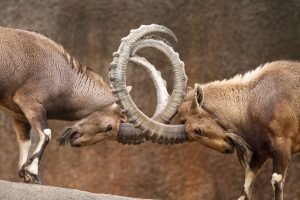 To be sure, the U.S. economy and its policymakers have faced upheavals before and difficult choices had to be made. But the current landscape is unique in that it is roiled by a once-in-a lifetime pandemic and a set of unusual circumstances that may or may not persist beyond this year. Thanks to massive government support, the pandemic-induced deep recession last year was cut short and the rebound has been remarkably swift. But the economy was not prepared for the stimulus-fueled surge in demand, and its unintended consequences – including inflation, a splintered job market, and widening wealth inequality – that have yet to be resolved.

The good news is that new case counts, hospitalization rates, and mortalities are falling dramatically, and vaccination rates are steadily rising. Time will tell if another Covid wave looms, but each shock has less of an impact as people learn to cope. The desire to return to normalcy is a powerful urge that enables households and businesses to adapt to adversity. Hence, there is every reason to believe that the summer slowdown in economic activity is not the start of a long swoon that marks the end of the expansion. Nor do we believe that the inflation spike underway is the beginning trend of ever-higher inflation, reminiscent of a few past episodes that cast a dark shadow over the economy.

There is no doubt that inflation is running hotter than in the two decades prior to the pandemic, a period of historically low inflation that often bordered on deflation. Following a 0.4 percent increase in September, the headline consumer price index stood 5.4 percent above its year-earlier level, matching the fastest annual inflation rate in 13 years. Nor is it just the often volatile food and energy prices responsible for the spike; the core CPI, which excludes the outsized increases in these components, also increased at the fastest pace since 1992, rising 4.0 percent from a year ago. 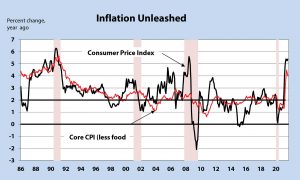 Hence, the accelerating inflation rate is hitting a broad basket of goods and services that consumers purchase, including rent, cars, clothing, and just about anything that enters into household budgets. Small wonder that inflation has become a more important topic of conversation than even jobs in the eyes of the public as well as commentators in the media. The pressing question is whether we are in the midst of runaway or transitory inflation, the pandemic-related supply shortages restraining growth is leading many to wonder if the nation is also descending into stagflation, wherein inflation is rampant and the economy is feeble.

As noted, the inflation surge this year is obvious and understandably worrying to many people, particularly those living on fixed incomes. But the only thing missing from the stagflation discussion is the stagnation. In the last episode of stagflation, from late 1973 through 1975, consumer price inflation averaged 11 percent a year but GDP contracted by 3.1 percent. Today, inflation may be running at a 13-year high of 5.4 percent, but real GDP is still expanding by a healthy 5.5 percent this year, despite the slowdown in the third quarter, and job growth is strong. To be sure, we’ve had a couple of close encounters with stagflation since the 1990s, but today’s environment is clearly not one of them.

In our view, today’s inflation dynamics are best described as M.E.S.S.I. – Moderating Expansion with Sticky Supply-driven Inflation. These dynamics aren’t only a reflection of supply constraints, nor are they only an indication of strong demand. Rather, they’re a combination of these two forces creating a messy inflation environment.

Initially, extreme health conditions, severe social distancing measures, and unprecedented fiscal transfers to households supported a surge in spending on goods. With domestic and international supply struggling to rebound quickly and inventories being run down, prices for goods surged. Later, as the health situation improved, the re-opening of the economy led to greater demand for services which also ran into tight supply conditions, primarily of labor, leading to higher service sector inflation.

It will take time to unwind these inflation-spurring forces, indicating that inflation will remain sticky around 3 percent or a tad higher for a while longer, well into next year. Importantly, however, sticky is a far cry from accelerating, wherein an inflationary psychology becomes firmly embedded in the public’s mind. When that happens, households pull their purchases forward, hoping to get ahead of future price increases, which only feeds into excessive demand and stokes even higher inflation. That’s hardly the case now. Indeed, a recent survey by Morning Consult shows that more than half of U.S. consumers decided against purchasing an item in September because it was more expensive than expected. Recent inflation data confirms these healthy dynamics, with significant price fallbacks in goods and services categories that were shunned by consumers in August and September. With spending on used vehicles falling, and demand for travel and leisure restrained by the surge in Delta variant infections, prices for vehicles, rental cars, hotels, and airfare all fell sharply.

What About Wage Inflation

A key risk for the inflation outlook stems from the possibility of a self-reinforcing dynamic between wage growth and consumer price inflation. During previous high inflation episodes this feedback loop tended to be strong, but after the economy entered a low-inflation regime in the 1990s the link has weakened considerably. Sure, there’s abundant evidence of strong wage increases at the lower end of the income spectrum, where labor is particularly in short supply, and small businesses are reporting record levels of wage increases as well as record-high wage expectations. 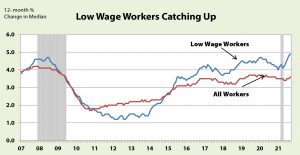 But it’s doubtful that workers have permanently gained more bargaining power. Instead, the current wage dynamics likely reflect a one-time re-leveling of low wages amid a severe shortage of workers willing to accept low-paying jobs. Importantly, bigger raises given to this group are not feeding up the wage ladder. Other measures that adjust for compositional shifts in the labor force – like the Atlanta Federal Reserve wage growth tracker, or the Labor Department’s Employment Cost Index – don’t point to spiraling wage inflation. Nor are workers in general expecting a sustained period of stronger wage growth. If anything, consumer confidence readings have shown a deterioration in inflation-adjusted income expectations, with only 30 percent of households expecting to be better off financially in a year.

What’s more, the wage-price dynamic can only gain traction if companies expect to pass on higher labor costs to consumers. But consumers are already curtailing spending on many items that had steep price increases this year, and the threat of losing sales will prod companies to hold the line whenever possible. That’s not to say they will stand fast against pay increases. As noted, companies are boosting wages to lure much-needed workers. Importantly, however, they have been able to do so without sacrificing profits because productivity growth has accelerated. Hence, the increase in unit labor costs has slowed to a meager 0.2 percent since the onset of the pandemic compared to 1.7 percent from 2015 to 2019. Simply put, businesses should be able to manage higher compensation costs without excessive pressure on margins or on the need to raise prices. 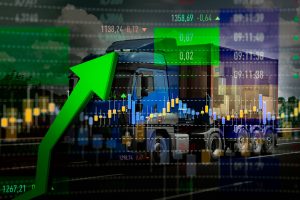 Past Is Not Prologue

Clearly, the inflation rate will stay elevated longer than expected a few months ago, thanks to ongoing supply restraints, surging commodity prices, highlighted by the spike in oil prices, and to some extent rising labor costs. But runaway inflation has rarely occurred in the U.S., and when it has, special factors were responsible. In the 1940s, these factors included the lingering effects of a 40 percent dollar devaluation and massive war-time spending, the end of price controls following WWII, and excessively loose monetary policy. In the 1970s, they included the end of the gold standard in 1971, oil price spikes, the gradual politicization of the Federal Reserve, and poor estimates of the economy’s output capacity by Fed officials.

Today, however, structural forces that should keep a lid on price pressures are firmly in place. These include demographic trends, as an aging population portends more savings and less spending, ongoing technological advances, solid productivity growth that should continue after the pandemic, and a sustained (although slower) pace of globalization. On the policy front, the Federal Reserve has already shifted away from an extremely dovish position of tolerating an above-trend inflation rate. At its last policy meeting, Fed officials stated that they intend to start removing monetary support as soon as November, planning to reduce their monthly purchases of government-backed bonds and stop new purchases entirely by the middle of next year. Most signaled that the first rate hike would likely take place before the end of 2022.

For sure, this gradual unwinding of policy support will not stop inflation in its tracks. It would be naïve to think that the Fed can unclog ports, boost semiconductor production that is desperately needed by the auto industry, or free up labor supply. But a modest tightening of financial conditions, which the Fed hopes to bring about, should limit the pace of demand growth, one of the prime inflation drivers, and provide time for production and, hence, supply to catch up. 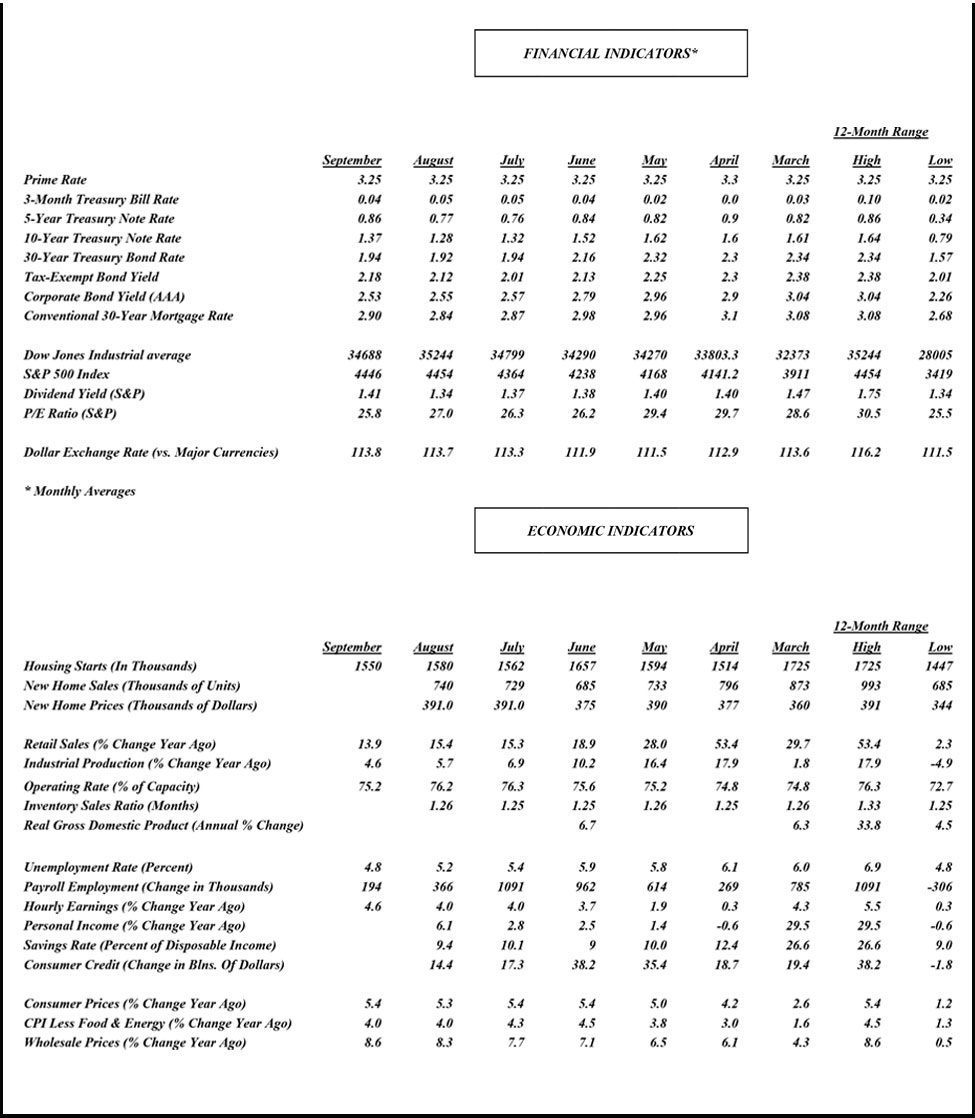