The clouds over the U.S. economy are dissipating as one of two key constraints on activity is fading. Thanks to an improving health situation amid ramped-up vaccination efforts, people are traveling again, going to concerts, and engaging in a host of social activities that were crushed over the summer months by the Delta variant. To be sure, the economy is not out of the woods, as case counts are rising again and winter is rapidly approaching, sending people indoors where infections are more likely to spread. But assuming a serious fourth wave of Covid-19 is avoided, the stage is set for a vigorous rebound in activity over the closing months of the year. 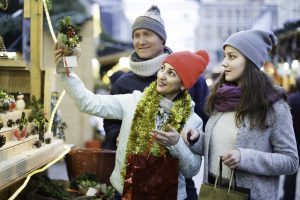 Indeed, the fourth quarter is clearly off to a hot start. Consumers stepped up spending in October, job growth exceeded expectations, and factories ramped up production. Forecasters are upping their growth estimates for the October-December period, which is on track to more than double the dismal 2.0 percent pace recorded in the third quarter. Retailers are primed for the best holiday shopping season in decades and companies are reporting stronger profits than expected.

But a second constraint that is yet to clear up is putting a damper on the good vibes. Simply put, labor and supply shortages are preventing the economy from growing as fast as it otherwise would. Worse, these shortages are contributing to the strongest inflation flare-up in thirty years, creating enormous problems for policymakers. The Federal Reserve may well have to speed up its plan to remove monetary support for the economy, cutting bond purchases by greater amounts than intended and raising its policy rate sooner than projected at its September policy meeting. Leading Fed officials still believe that an improving health situation will ease the shortages and bring inflation under control. That belief is being sorely tested.

If October is any indication, consumers are poised to open their wallets wide during the holiday shopping season. Retail sales surged by a stronger-than-expected 1.7 percent during the month, lifting the total 21 percent above pre-pandemic levels. Consumers have plenty of cash, thanks to massive government transfer payments over the past 18 months, a reviving job market and healthy balance sheets, reflecting surging stock prices and home values. Indeed, sales would have been even stronger if retailers had more goods in inventory; auto dealers in particular are struggling to keep up with demand owing to a computer chip shortage that has suppressed the production of motor vehicles.

Indeed, the details of the retail sales report suggest that consumers may have started their holiday shopping early out of fear of product shortages. That certainly would come as no surprise, given the drumbeat of headline-grabbing reports in the media regarding supply chain disruptions and delivery delays that encourage shoppers to get their orders in early. Not coincidentally, among the strongest gains at retailers in October were electronics and appliances, products that are traditionally purchased for holiday gifts.

If that’s the case, it may be premature to extrapolate the strong retail report into a blockbuster holiday shopping season. To the extent consumers are pulling forward their purchases to avoid shortages, some payback in subsequent months could be expected. Given the seasonal pattern of sales points to strong increases in November and December, any shortfall in demand due to payback from early shopping would translate into weak sales reports for those months on a seasonally adjusted basis. That, in turn, would convey a confusing message to the Federal Reserve and investors, raising the possibility of a policy mistake and heightened market turmoil.

If there were any disappointment with holiday sales, it would most likely come from supply disruptions, not from a shortfall in demand, even if consumers pulled forward some purchases. As noted, households are in great financial shape to make this the strongest holiday spending season since 1999. In addition to the massive government income support and asset gains, households accumulated more than $2 trillion in excess savings from unspent funds during the pandemic. 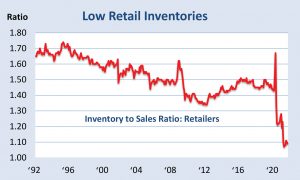 What’s more, the health situation has vastly improved; more than 75 percent of adults are vaccinated and new infections fell by more than 50 percent in September and October. While the current uptick in virus cases is worrying, booster shots are becoming more widely available, which should restore waning immunity for those already vaccinated. As the health situation improves, people will be eager to resume normal activities that involve in-person gatherings, such as dining out, traveling, and other services that health concerns had discouraged. Lingering fears of infection stifled sales at restaurants and bars in October, the one disappointment of an otherwise solid retail sales report for that month.

The hope is that as consumers resume normal buying patterns, pivoting away from buying goods when they were homebound towards services, it will provide some relief to goods producers that are struggling to keep up with demand and, hence, take some steam out of price pressures. There were signs of this happening when the economy reopened before the Delta variant came on the scene, as many commodity prices had fallen significantly during the early summer months. While prices that had been crushed by the pandemic came roaring back as the economy reopened – rental car and truck prices, airline fares and hotel and motel prices, among others – that was thought to be a temporary rebound from exceptionally depressed prices linked to earlier lock-downs. The Federal Reserve firmly believed that the return to normal buying habits would buy time for supply to catch up with demand, relieving inflationary pressures.

The good news is that domestic factories are ramping up production; manufacturing output surged by 1.2 percent in October to its highest level since March 2019. Even auto production increased by a robust 11 percent, suggesting some easing of microchip shortages. But the vast majority of goods that will be in demand during the upcoming holiday season are imported, and that’s where the supply snarls are gumming up the works — sustaining the upward pressure on prices — as it makes holiday sales highly sensitive to global health conditions. Unfortunately, vaccination rates in some of our major trading partners are seriously lagging. In Vietnam, for example, the vaccination rate stands at a low 13 percent and in Indonesia only 20 percent of the population is fully vaccinated.

Aside from the health-related factory closures overseas, U.S. importers are struggling to receive goods that have already shipped. According to ship-tracking website Marine Traffic, more than 125 ships with nearly half a million shipping containers are anchored outside the Los Angeles-Long Beach port complex (which handles 40% of import volumes entering the U.S.), facing wait times of up to four weeks. Further complicating the bottlenecks is a lack of warehouse space for containers, as the national vacancy rate at shipyards fell to a historic low of 3.6% in the third quarter. 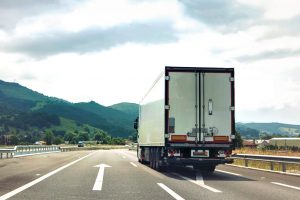 Meanwhile, a shortage of workers is adding to the logistics nightmare. A record-high 8.7 percent job openings rate in the transportation and warehousing sector highlights a lack of workers to help transport goods that do make it through U.S. ports. This shortfall of workers needs to be addressed in order to resolve the massive ships backlog and to empty full warehouses. The administration’s call for warehouses to remain open 24/7 to ease congestion was intended to help. But it turns out that no trucks showed up to remove the goods in the middle of the night, as there were not enough drivers to transport them.

So will the supply Grinch spoil the holiday shopping season? No doubt, people will not find everything they want. But nothing motivates large corporations more than the prospect of losing sales, and many of the retail giants like Walmart, Target, and Costco are chartering private ships and planes as part of wider, albeit costlier plans to mitigate port congestion. While these will help ensure that shelves are stocked, small businesses face a much more daunting restocking challenge, given they have fewer resources to charter their own vessels or pay the astronomical shipping fees, which are up more than 400 percent over the past year.

Small businesses are the biggest losers amid the pandemic-related shortages that are causing delivery delays, higher input prices and revenue losses. Not only are they losing out in the race to acquire goods to sell, they also face severe headwinds trying to find workers. In October, 49 percent of small firms had unfilled job openings, just under the record 51 percent share in September. For the most part, mom-and-pop establishments are seeing workers flee to larger firms offering better opportunities, which puts more pressure on them to compete by offering higher pay packages and other benefits. 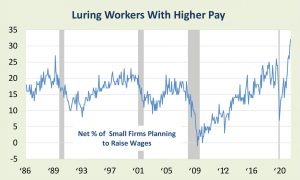 Simply put, workers are in the strongest bargaining position in decades, which is pushing up labor costs and reinforcing other cost pressures stemming from supply shortages. Importantly, companies have also gained pricing power and are able to pass on these costs to consumers, fueling the inflation surge now underway that should last through the early months of 2022. However, a sustained wage-price spiral reminiscent of the 1970s is not in the cards.

Most of the supply disruptions are uniquely linked to the pandemic, which should fade as health conditions improve and economic conditions normalize. Meanwhile, the robust demand that is validating the pricing power of businesses is uniquely tied to the massive government stimulus and elevated savings of households. The stimulus has just about run its course, and excess savings are rapidly depleting. Americans will be paying more for their Christmas gifts and many may not find what they want. But the inflation scourge dampening holiday spirits should wane in the post-pandemic economy that unfolds next year. 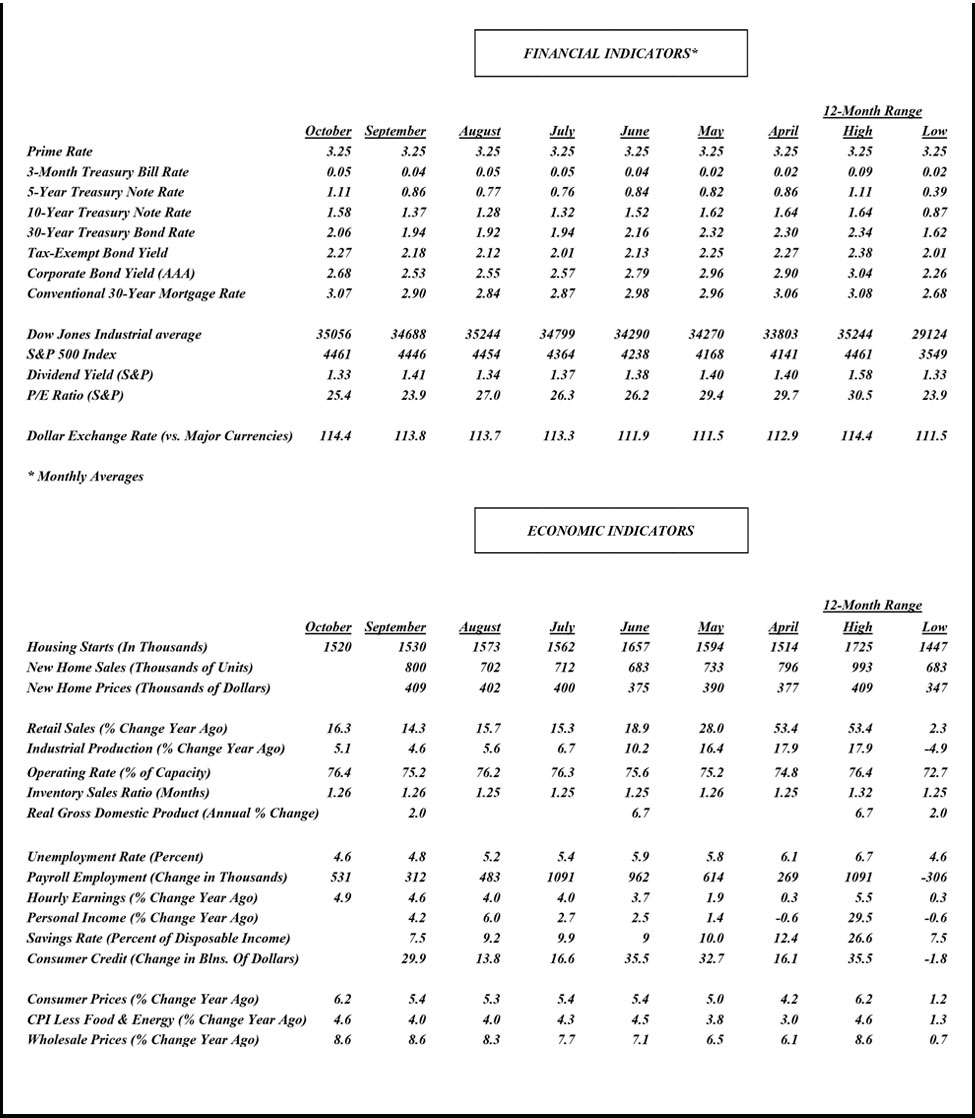