When Will Inflation Peak?

It’s been a rough ride for investors as red ink has spilled profusely so far this year. The losses have been particularly acute in the bond market, which, ironically is usually the refuge for investors seeking safety and stability when conditions get dicey. Not so much this time. In the first quarter, holders of Treasury securities saw the value of their portfolios shrink by 5.6 percent, the worst performance for a quarter on record. The stock market also took it on the chin, as prices are down sharply since the end of last year, although they have rallied from the lows reached in the first week of March. 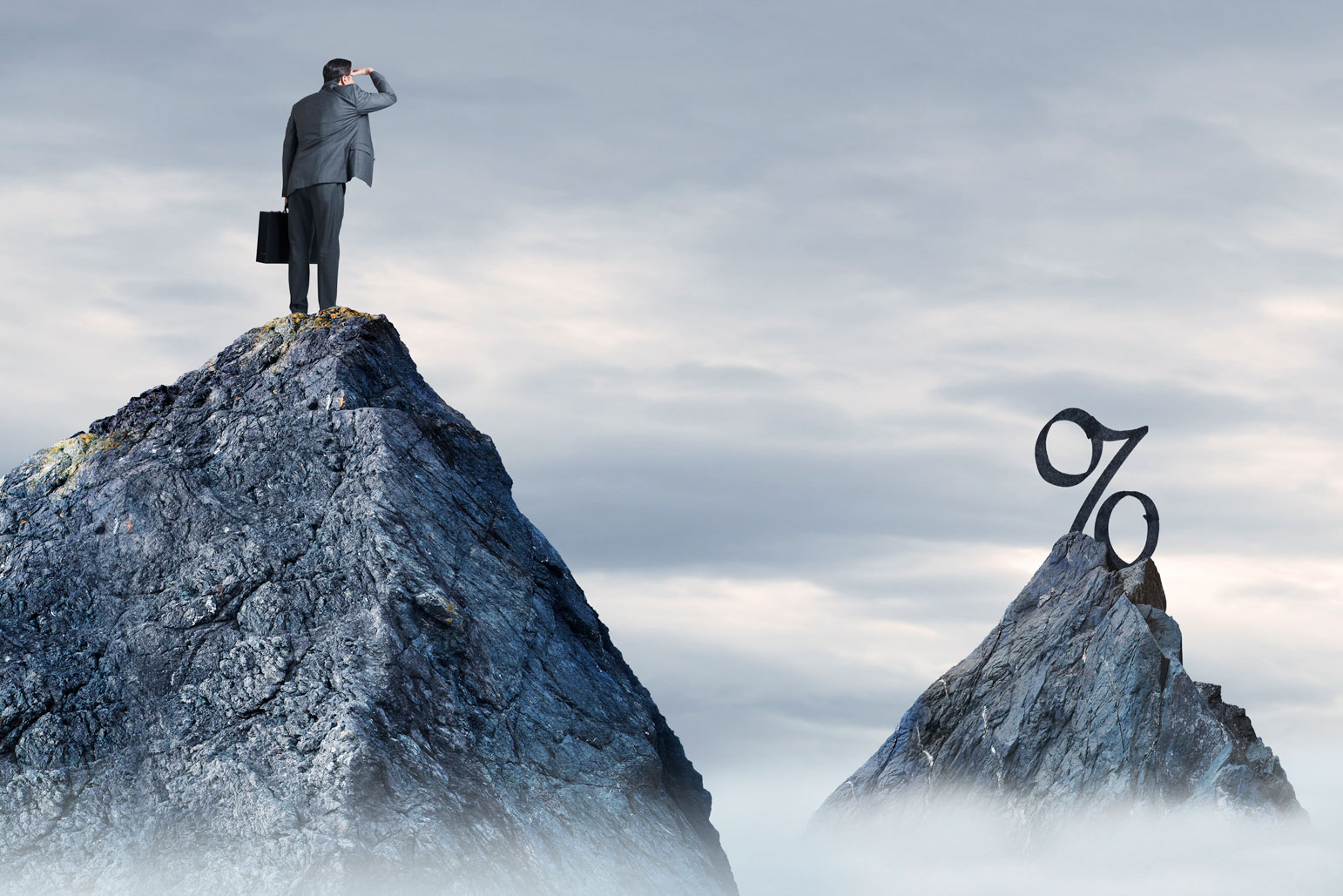 So far in the second quarter things are only getting worse for bond investors. The losses in the fixed income market, reflecting rising yields, also took another leap up since the end of the first quarter. At this writing, the bellwether 10-year Treasury bond – the standard against which mortgage and other loan rates are set – stood at over 2.90 percent, the highest since 2018 and up from 2.39 percent at the beginning of April. However, the climb may not stop here as forces that have propelled rates higher are still very much in motion.

There are times when the financial markets and the economy are not in sync. For example, interest rates tend to rise when economic activity strengthens. But that was not the case in 2021. Despite the fastest recovery from a recession on record, the 10-year Treasury yield hardly budged between early March and December, and shorter-term yields remained anchored at historically low levels throughout the year. That disconnect between Main Street and Wall Street reflected a wide divergence between what investors and the Federal Reserve thought about inflation and what was unfolding in real time. Now they are on the same page and corrective inflation-fighting measures are being put in place. The critical question is whether these measures are coming too late to put the inflation genie back in its bottle without causing a recession. For its part, the Fed believes it can be done, but forces beyond its control may upend the best-laid plans.

Fed’s Credibility On The Line

The Federal Reserve has had remarkable success in keeping inflation and inflationary expectations under control over the past thirty years. Its success, however, did not happen overnight. Following the rampant inflation during the 1970s, it took growth-busting rate hikes in the 1980s, which resulted in two severe recessions, and a decade of vigilance in controlling prices to build up a reservoir of inflation-fighting credibility. By the 1990s, it was widely assumed the Fed would keep its commitment to fight any inflation upsurge with swift action, even if meant dealing a blow to economic conditions. 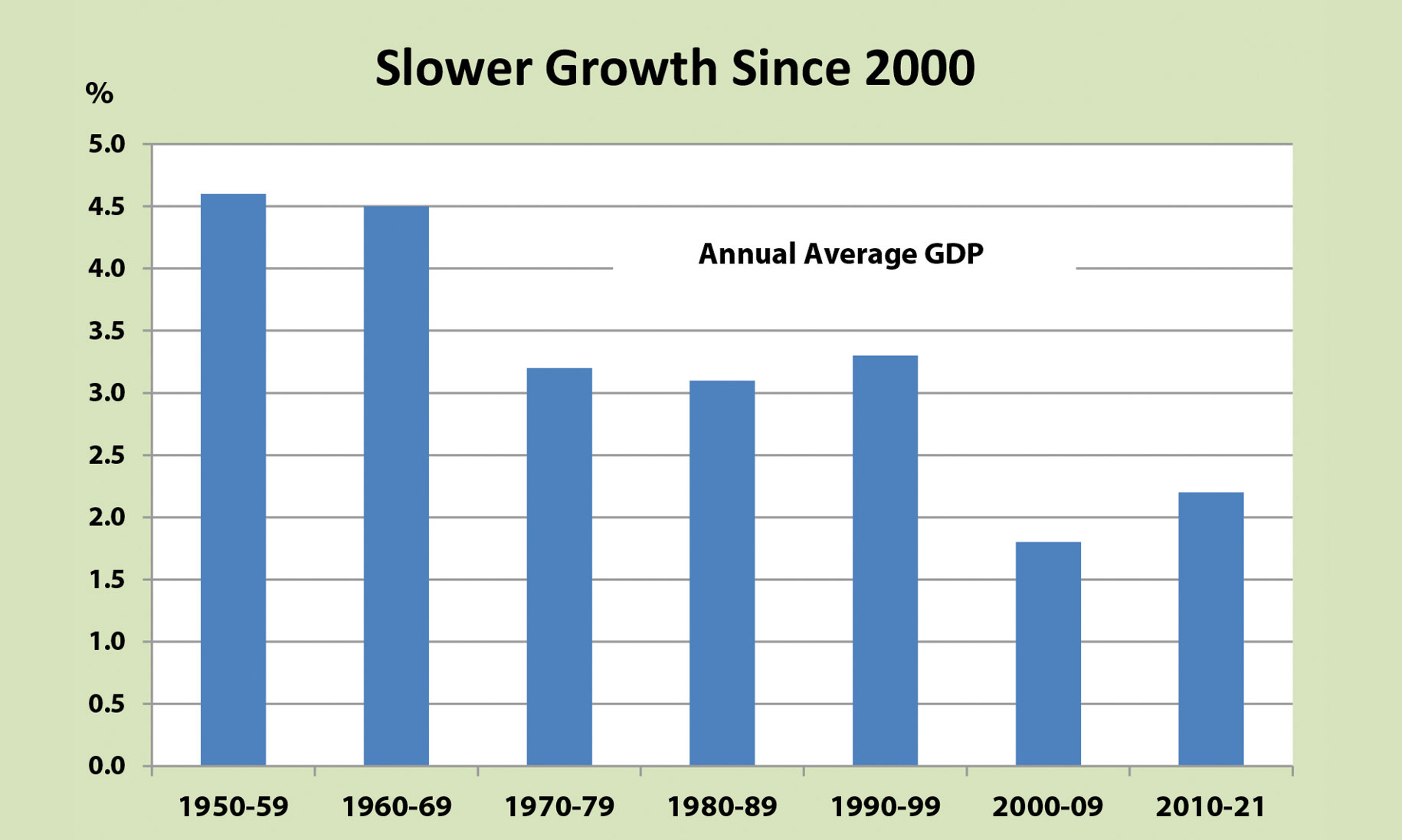 To be sure, the Fed has had considerable help in subduing inflation over the past thirty years as globalization, technological advances, and better inventory management have all played key roles. The past two decades have also been characterized by slower growth than in most of the previous postwar periods and demand rarely pressed against the economy’s output capacity, which also curtailed price pressures. Indeed, for most of the past two decades, inflation has been running too low for the Fed’s comfort. Meanwhile, the period was characterized by growing inequality as low-paid workers have lagged the wealth and income gains achieved by those higher up the income ladder.

Understandably, until recently, the Fed pivoted away from controlling inflation towards stimulating employment. In mid-2020, it explicitly said that inflation would be allowed to run hotter than normal for a while to achieve that objective, arguing that tighter labor markets would lure long-disenfranchised people back to the workplace and enable workers to regain bargaining power that had been eroded in recent decades. That sentiment guided monetary policy, keeping it ultra-loose throughout 2021 even as the economy recovered swiftly from the recession and inflation gained traction. For most of the year, the Fed believed transitory factors related to the pandemic were responsible for the inflation spike, and would recede once the health crisis faded.

Unfortunately, the Fed’s assessment of inflation turned out to be more hope than a reality. Perhaps if the original wave of Covid-19 was the only chapter of the health crisis, things might have turned out differently, as the lock-downs and supply shortages that ensued in 2020 would have ended with the ebbing of the pandemic. But the Delta variant of Covid emerged last year followed by Omicron and a sub-variant this year, sending the health crisis into a second and third gear both in the U.S. and overseas, which amplified the supply-chain bottlenecks. Additionally, the huge government stimulus payments sent out in 2020 and 2021 stoked more demand for goods than the economy’s constrained output capacity could accommodate. 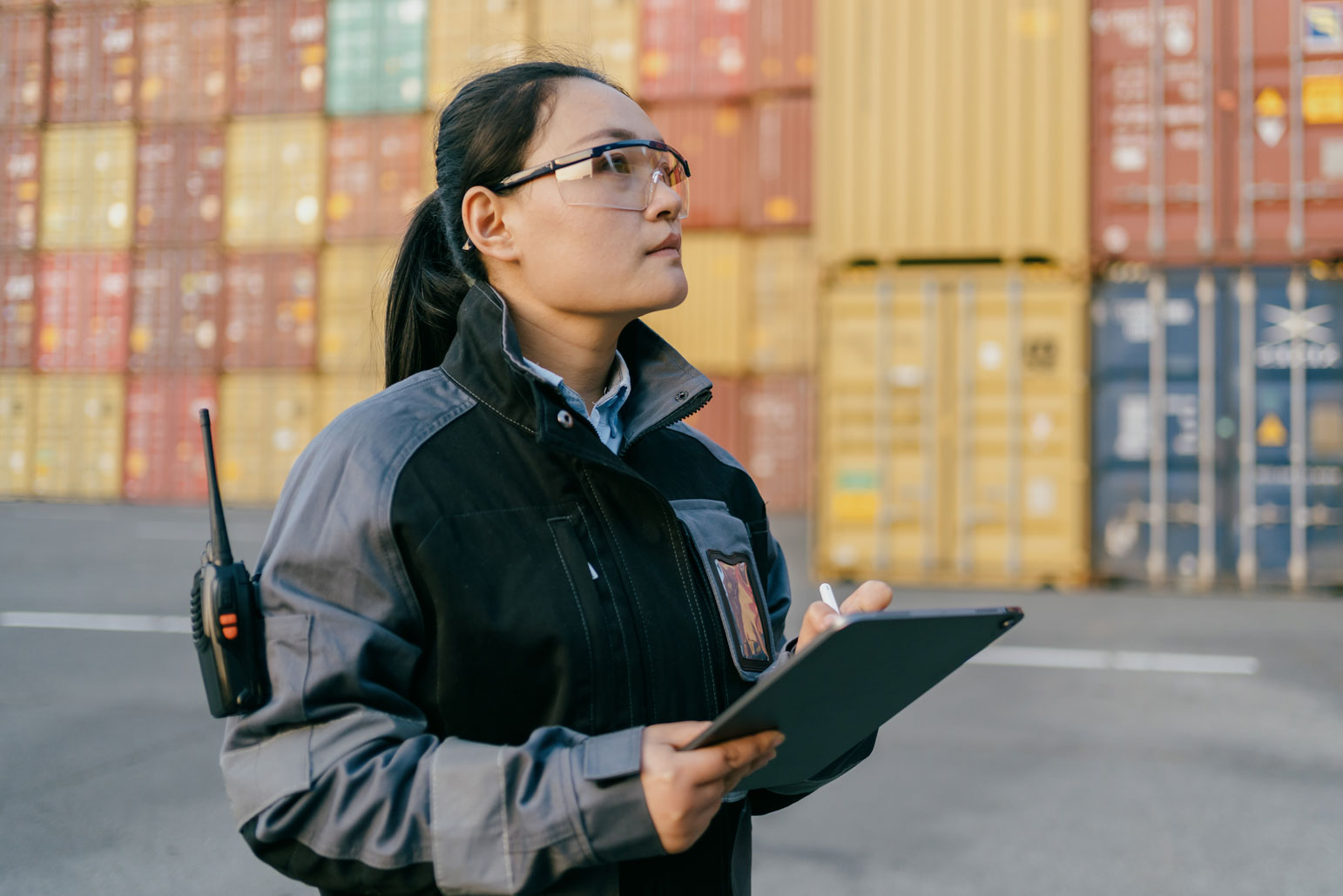 As it turned out, the Fed got more than it bargained for on the labor front. The job-creating engine not only revved up, it went into overdrive. In February, there were 11.3 million job openings competing for 6.3 million unemployed workers, a margin of excess never encountered before in the U.S. The issue transformed from not finding enough opportunities for workers to coaxing them off the sidelines to take a job. The upshot is that worker bargaining power strengthened considerably and labor costs surged. Importantly, employers have been able to pass these costs onto consumers, sowing the seeds of a dreaded wage-price spiral reminiscent of the highly inflationary period of the 1970s.

For a while, the supply-chain logjams started to clear up, helped by the rapid fading of the Omicron variant in the U.S. However, prospective relief on the inflation front was unceremoniously dashed by the war in Ukraine and a renewed flareup of Covid in China, prompting widespread shutdowns of factories that are an important source of goods in the U.S. Not only has the war roiled the oil market, sending energy prices surging, Russia and Ukraine are the biggest supplier of fertilizer and food products on the global markets, putting more pressure on food prices. This perfect storm of price-boosting events has left its footprint on the inflation landscape, lifting the 12-month increase in the consumer price index to a 40-year high of 8.5 percent in March.

Bond Vigilantes Are Back

Unsurprisingly, the virulent inflation flareup has damaged the inflation-fighting credibility the Fed has assiduously built up over the past thirty years. Even Fed Chair Powell has acknowledged that inflation has been stronger and more persistent than expected, a tacit admission that the Fed should have abandoned its ultra-easy monetary policy sooner. Fixed income investors, whose interest payments are ravished by higher inflation, have been unforgiving. The long-dormant bond vigilantes have come out of the woodworks and sent yields climbing at the fastest pace in decades.

How high yields will climb depends on the trajectory of inflation. On this score there is both good and bad news. The good news is that there are compelling reasons to think the peak in inflation is close, if not already here with the March 8.5 percent surge. The so-called base effects will start to kick in this month. Starting in April prices will be compared with the elevated levels of a year ago, when consumer inflation notched increases of 0.6-0.9 percent a month between April and June. Hence, even if recent monthly increases stay the same going forward, the year-over-year comparisons 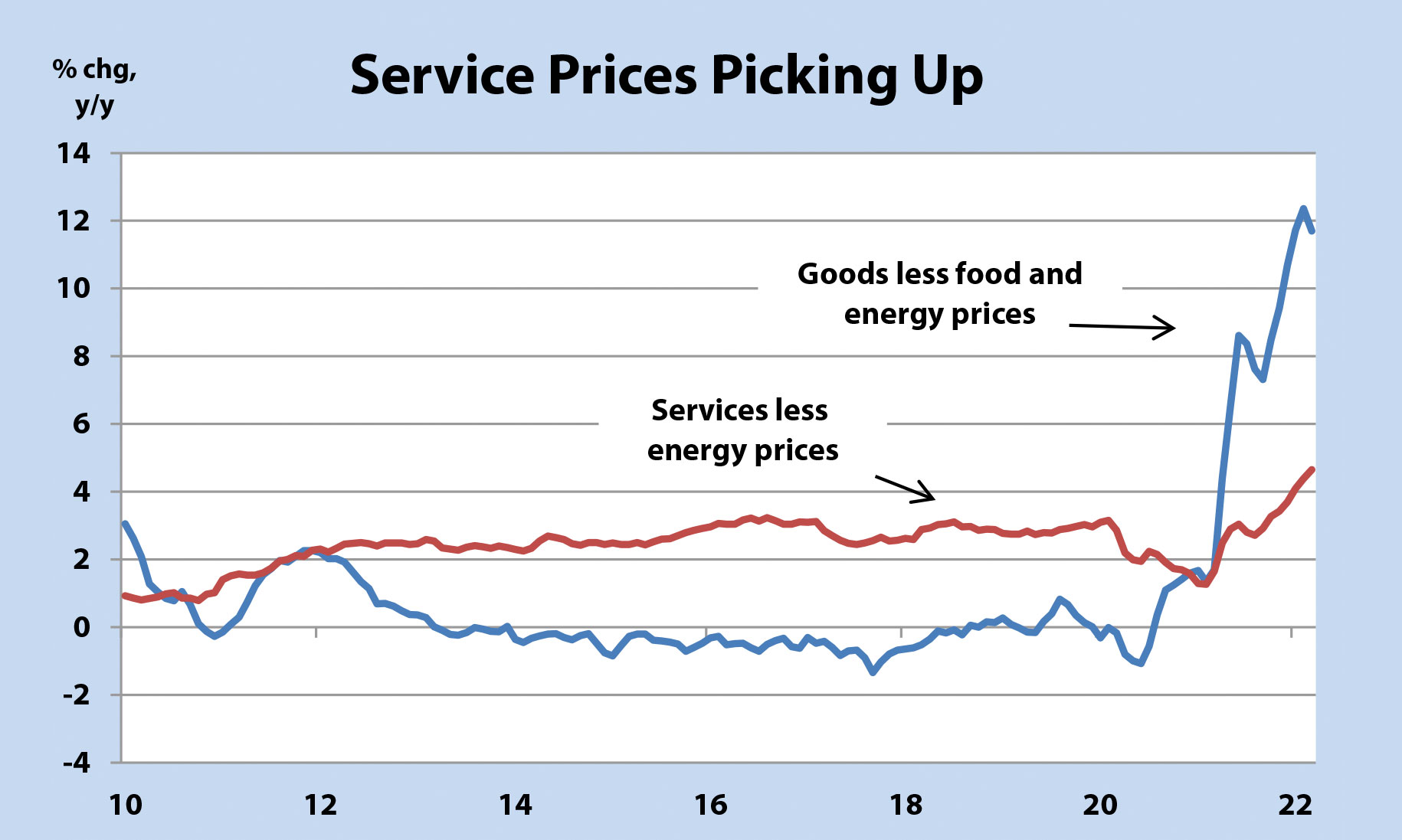 will slow. As Covid continues to wane in the U.S., consumer spending habits will shift from goods to services, relieving pressure on goods prices.

The bad news is that service prices are also moving up rapidly, underpinned by forces that will not quickly fade. Shelter costs, which accounts for the largest share of the consumer price index – 32 percent – have been accelerating, reflecting the surge in home prices that is driving would-be house buyers into apartments and driving up rents. At the same time, services are more labor intensive than providers of goods – think of restaurants and bars – and labor costs are their major expense. With such an acute shortage of workers relative to open positions, the sturdy rise in wages is not likely to end anytime soon.

Inflation Should Peak Soon, But Will Stay Elevated

Simply put, inflation is likely near a peak, but no collapse is in store. True, once the war in Ukraine ends, hopefully sooner rather than later, prices of oil, food, and other commodities should recede – some fairly dramatically. By itself, this would have a major impact; for example, higher gasoline prices accounted for more than 70 percent of the 1.2 percent increase in the headline consumer price index from February to March. Consumers are not as receptive to higher prices as they were when generous government stimulus payments padded their bank accounts last year.

A recent poll conducted for Bloomberg revealed that 80 percent of households plan to cut back spending because of higher prices. One reason is that wages, despite accelerating, are still not keeping up with inflation. As a result, many people are drawing on their savings to sustain spending, and this source of purchasing power is not a bottomless well. As companies run into more price resistance, they will refrain from hiking prices or risk losing sales. To some extent, inflation sows the seeds of its own destruction.

Still, there is a lot of “oomph” in demand, thanks to the robust job market and healthy household balance sheets; the Fed’s challenge is to remove some of the froth that is stoking inflation without doing too much damage to the economy. Sadly, the Fed has never accomplished a soft landing when inflation was as high as it is now. Monetary policy affects the economy with considerable lags, so the series of rate hikes planned over the next several months will start to bite more deeply into activity later this year and in 2023, when conditions may not be strong enough to withstand them. Odds are, the economy has enough firepower to survive higher rates through most of this year, but the risk is that the Fed turns overly aggressive in the face of sticky inflation and induces a recession next year. Some luck as well as skill will be needed to avoid that outcome. 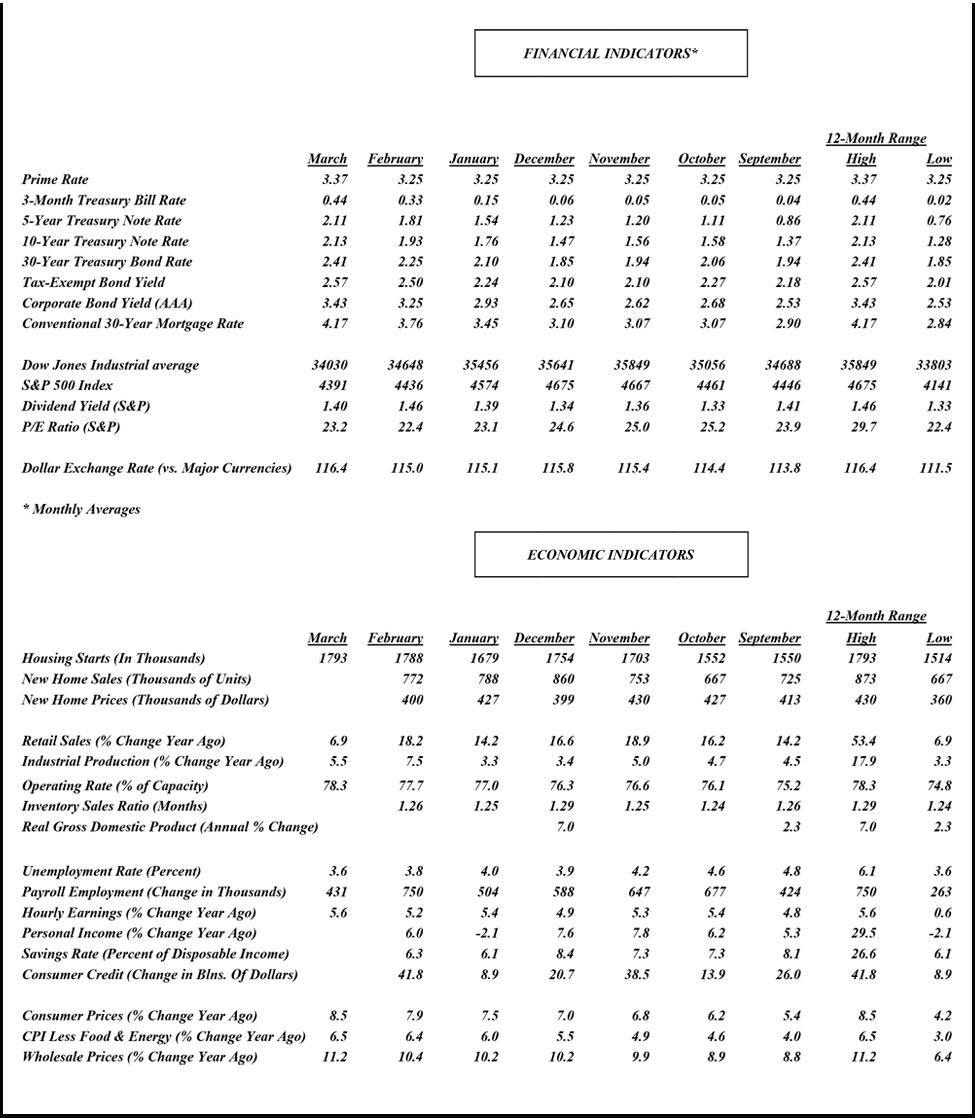