For The Fed, Failure To Curb Inflation Is Not An Option

Last year the main debate among economists was whether the inflation upsurge that suddenly gripped the nation was transitory or lasting. Most, including policymakers at the Federal Reserve, blamed transient forces related to the pandemic, which they believed would fade as health conditions improved. That view, of course, has since been debunked, and the Fed openly admits it waited too long to start the anti-inflation campaign that is now in full swing. At its last policy meeting on June 16, the Fed hiked short-term rates by three-quarters of a percentage point, the steepest one-off increase at a meeting since 1994 and signaled that several more increases were on the way in coming months.

More recently, the debate has shifted. Now the question is whether the Fed can tame inflation without causing a recession, i.e., steer the economy onto a soft landing. Most economists believe a recession is inevitable. One reason: the Fed has never successfully brought down inflation when it exceeded 5 percent without sending the economy into a downturn. By just about any measure, inflation is running well above that threshold. The Consumer Price Index in May clocked in at 8.6 percent over the past year, and even the Fed’s preferred inflation gauge – the personal consumption deflater – increased by 6.3 percent in April from a year ago. 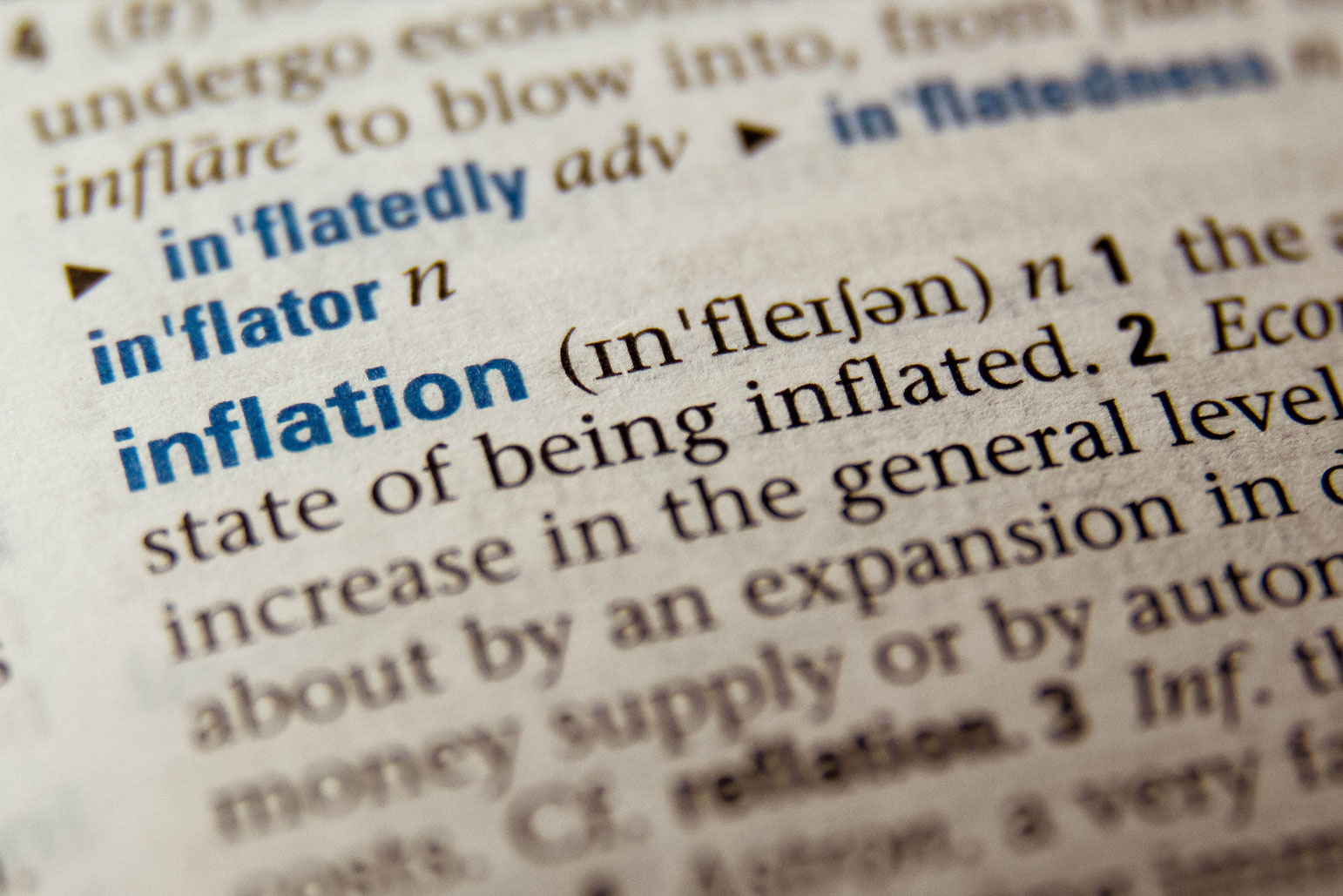 To be fair, the Fed’s misreading of inflation last year was not entirely its fault. There was every reason to believe that in a post-pandemic world price pressures would ease as people resumed normal purchasing habits, spending more on services and less on goods that had spearheaded the inflation spiral because of torrid demand from home-bound consumers forced to stay indoors for health reasons or remote work. Nor could the Fed predict supply shortages that were amplified by the war in Ukraine and new waves of Covid that caused factory shutdowns in China. But the Fed also underestimated the purchasing firepower in the hands of consumers, stoked by more than $2 trillion in excess savings accumulated during the pandemic from unspent funds and trillions of dollars of government stimulus payments. The Fed still believes that it can short-circuit that firepower and rein in the inflation genie without causing a recession, but it understandably admits the path to success has gotten considerably narrower.

Is A Recession Inevitable?

As noted, history is not on the side of the Fed in avoiding a recession. It is hoping to replicate the experience in 1994-95 when rate hikes it implemented kept inflation under control without choking off growth. But its goal then was to prevent inflation from breaking out of the low 2-3 percent range it had been locked in over the previous decade. It’s much more difficult to bring inflation down from sky-high levels that is underpinned by a sizable excess of demand over supply. The challenge is to determine how much demand destruction is needed to wring out that excess and how much tightening is needed to do the job.

Keep in mind that interest rates are a blunt instrument in the Fed’s toolkit. Not only do they have unpredictable effects on demand, their impact is felt with a lag. That’s why the Fed tends to raise rates in small increments during tightening cycles, aiming to monitor effects along the way and change course if warranted by unfolding events. During the last tightening cycle, from 2016-2018, it raised rates 9 times in quarter-point increments to stave off inflation as the economy moved towards full employment. It stopped tightening when financial markets rebelled, and signs of weakness emerged. That flexibility to pause kept the economy afloat until the Pandemic sent it into a tailspin in early 2020.

But the Fed does not have the luxury of watchful waiting now as the inflation surge is already coursing through the economy. Importantly, unlike previous tightening episodes, inflation expectations are starting to creep up. As much as anything, the Fed knows that once expectations of higher prices gain traction, inflation becomes more deeply entrenched and more difficult to rein in. The response, therefore, needs to be swift and the message sent to households clear that the Fed will do anything in its power to restore price stability. The more successful the Fed is in retaining its inflation-fighting credibility, the easier it will be to prevent inflation expectations from getting out of hand.

In the weeks leading up to the Fed’s June 15-16 policy meeting, most thought that officials would increase short-term rates by half-percentage point, matching the increase taken at the previous meeting in May. The fact that it turned even more aggressive – hiking by three-quarters of a percentage point to a range of 1.5% -1.75% – indicates that inflation concerns had taken a big leap upward. 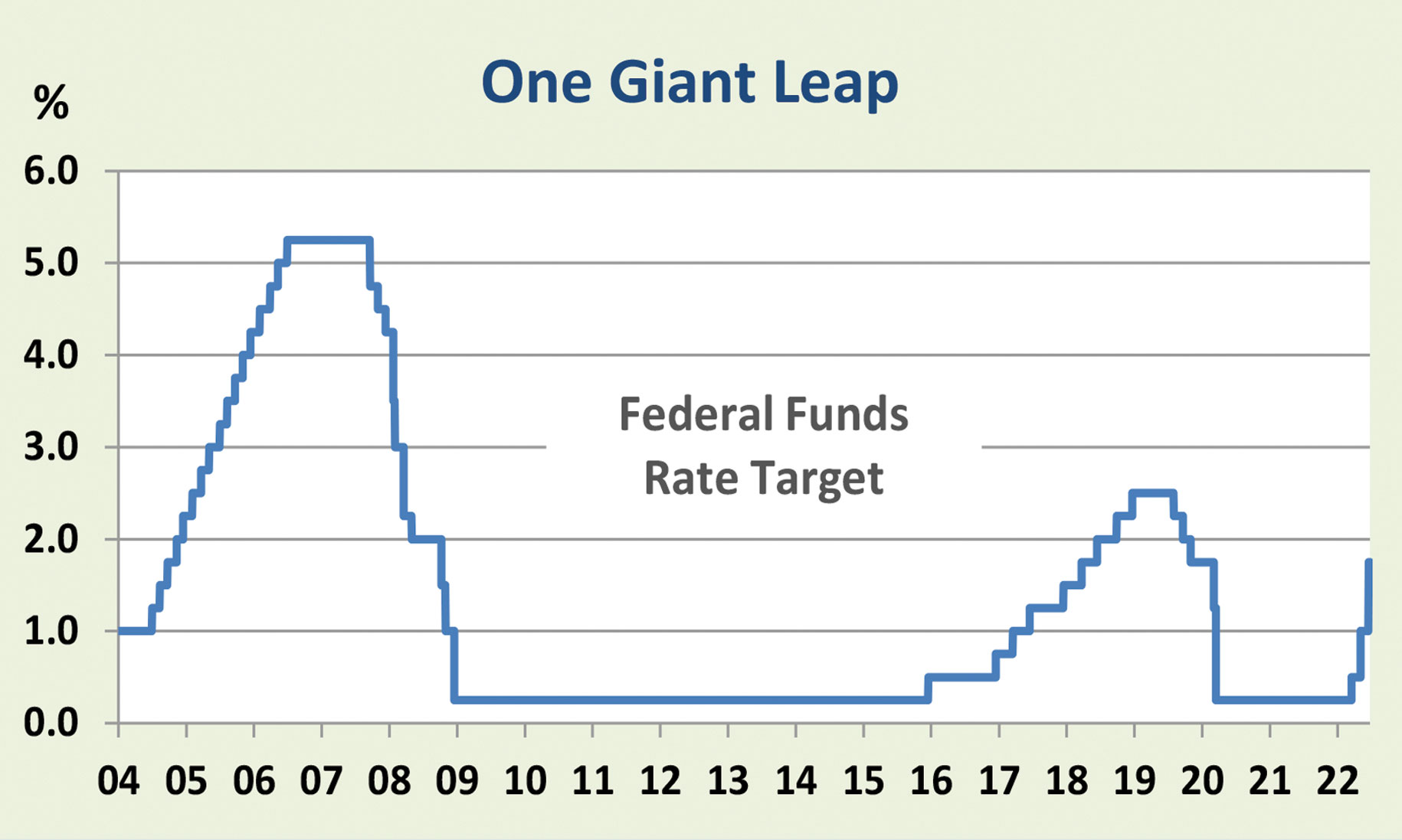 The tipping point prompting the Fed’s last-minute decision to go bolder arose from two key indicators in the week before the meeting. Most prominently was the consumer price report that revealed a bigger increase in headline inflation than expected, with the CPI leaping to 8.6 percent in May from a year ago, up from 8.3 percent in April. It was widely thought that inflation had reached a peak at 8.5 percent in March and would continue to moderate as it had in April; instead, it re-accelerated. The second disturbing report, perhaps even more so, was the University of Michigan reading on consumer inflation expectations over the next five years. After holding mostly at 3 percent or less for the past 25 years, the survey in early June revealed a leap to 3.3 percent, the highest since 1994.

Not coincidentally, that was the year the Fed last hiked its lending rate by three-quarters of a percentage point. But inflation then was running at around 3 percent and was in the midst of a decade long retreat; what’s more, inflation expectations were declining. Now inflation is nearly three times as high and expectations are on the rise, a lethal combination that is understandably amplifying the Fed’s angst that it is falling further behind the inflation curve.

Failure Is Not An Option

Unsurprisingly, the aggressive pivot by the Fed is roiling the financial markets. Through the middle of June, the stock market turned in its worst performance to start a year since the early 1960s and bond yields have soared. Mortgage rates, which are linked to the 10-year Treasury yield, has leaped to nearly 6 percent from 3 percent at the start of the year. The startling increase is impacting the housing market, sending sales into a nosedive, and making homeownership less affordable for a growing swath of the population. 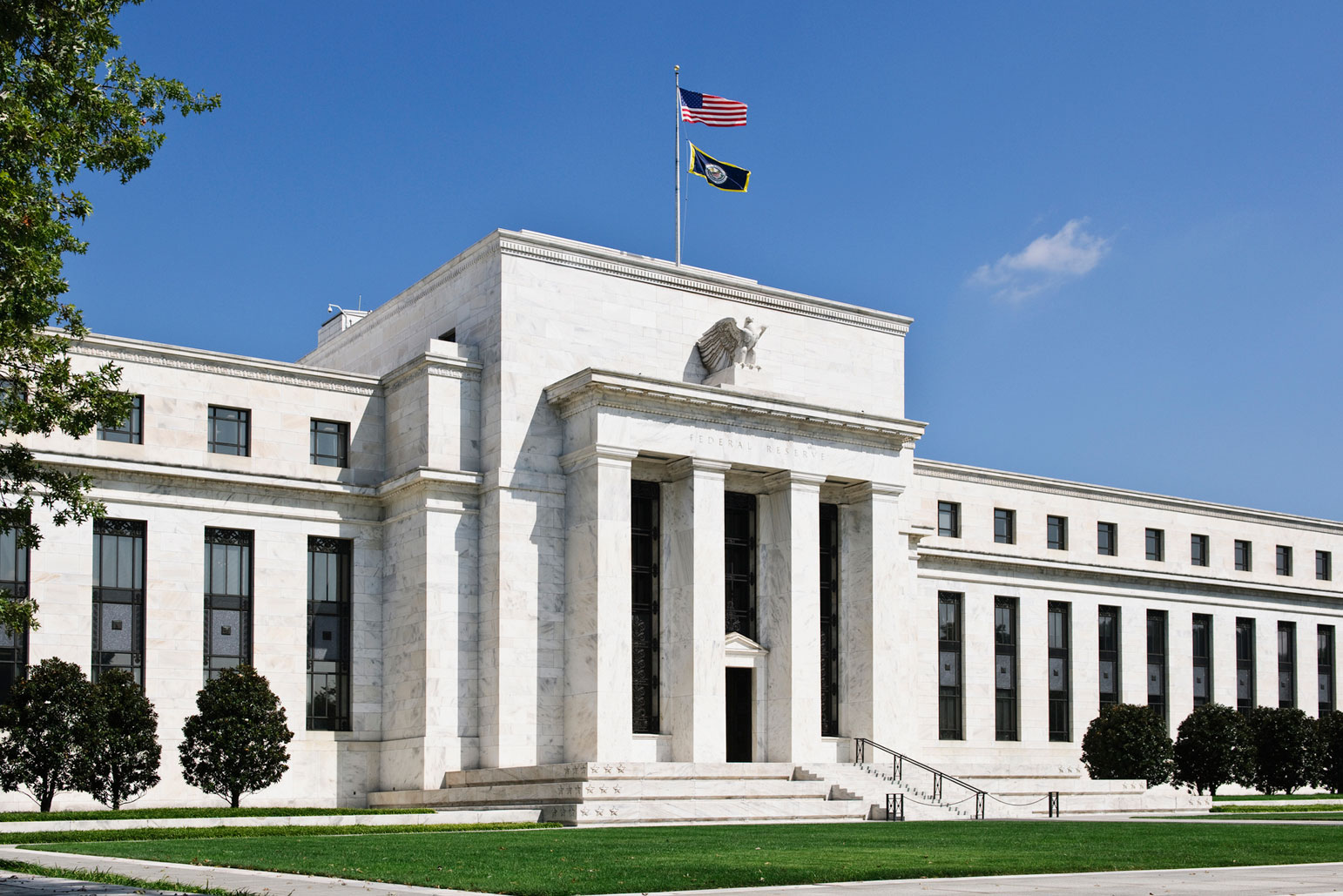 Unlike the tail-end of the 2018 tightening cycle, the Fed is not overly concerned about the stock market swoon; indeed, it may even appreciate the helping hand that the wealth destruction from stock losses provides in curbing demand. Likewise the surge in market interest rates, which has been much steeper than the rate hikes imposed by the Fed, is doing some of the Fed’s dirty work as the more it curbs activity the less the Fed needs to raise interest rates.

That said, the aggressive and front-loaded policy tightening is far from over. The Fed has a dual mandate of achieving full employment and low and stable inflation of around 2%. Given that the employment mandate has been met – the unemployment rate stands at a historically low 3.6 percent – but inflation continues to massively overshoot its 2% target, the Fed is hyper-focused on reducing inflation. While Chair Powell is aware that tightening policy too quickly and too much could tip the economy into recession, he has asserted that “the worst mistake we could make would be to fail” to restore inflation to its 2% target, “which is not an option.”

How Far Will It Go?

At his Congressional testimony on June 21, Chair Powell reiterated that sentiment even more forcibly, admitting that the interest-rate hikes could send the economy into a recession, but it’s an outcome he is willing to risk to rein in inflation. That’s surely not what the administration wants to hear, but neither does it want its poll numbers continue to sink because of rampant inflation. In survey after survey, households steadfastly proclaim that inflation is their top worry. Indeed, a remarkable proportion of respondents believe that the economy is already in a recession, despite the solid growth in jobs, rising wages and low unemployment.

While recession fears amid a robust job market seem counterintuitive, it makes sense to workers who see their wages eroded by inflation. In inflation-adjusted dollars, average hourly earnings are no higher now than they were two years ago. True, lower-paid workers have received faster wage increases than higher-paid workers over the past year, although they too have not kept up with inflation. Importantly, as the Fed’s rate-hiking campaign continues and its growth-dampening influence grows, the lower-paid workers will be the first to be laid off. 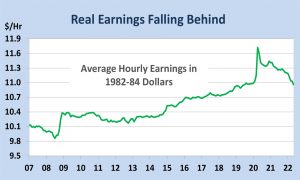 is a time-honored trend during the late stage of a business cycle. It does not mean that a recession is just around the corner. Every recession since 1960 was preceded by pronounced margin contractions, but the lag time has varied widely – from 12 months to more than five years. A lot depends on the speed of margin erosion and how aggressively employers respond by laying off workers, driving up unemployment.

Going into this year, companies had a record cushion of profits to work with, which should buy them time to get costs under control before taking drastic recession-inducing measures. Historically, employers hold on to their workers during the late stage of an expansion even when demand starts to weaken. One reason is that they need time to assess if the weakness is temporary or the start of a permanent pullback in sales. Hiccups occur during expansions and it is difficult to modify the size of a workforce to align with temporary shifts in sales. Ultimately, the fate of business profits will depend on revenue growth. If the Federal Reserve can skillfully manage its anti-inflation policy without choking off demand — accomplishing a soft landing — it would silence the recession alarms now ringing in the financial markets. 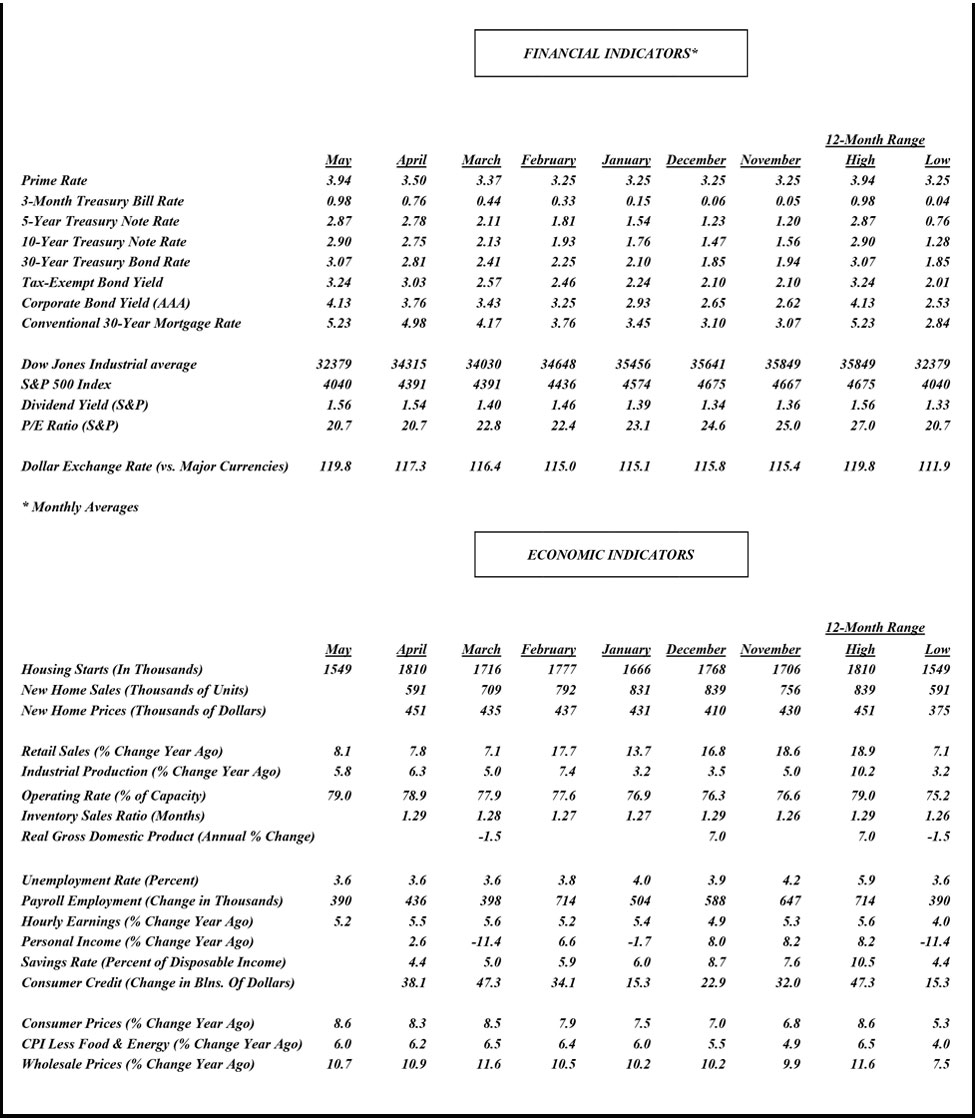