Enough is enough! The economy has demonstrated an astonishing amount of resiliency against the headwinds thrown at it over the past two years – Covid-19, both short and long, surging energy prices, spiraling interest rates, supply shortages, and, not least, stubbornly high inflation. Through it all, the job market has remained hot, consumers have kept their wallets open, and the broader economy has stayed afloat, notwithstanding two misleading quarterly declines in GDP. But the party’s uninvited guests are getting too intrusive, and policy makers are taking away the proverbial punch bowl. They thought the festivities could continue at a quieter decibel if the less-welcomed guests left the party. They have not, and that benign approach is now being discarded in favor of some tough love. 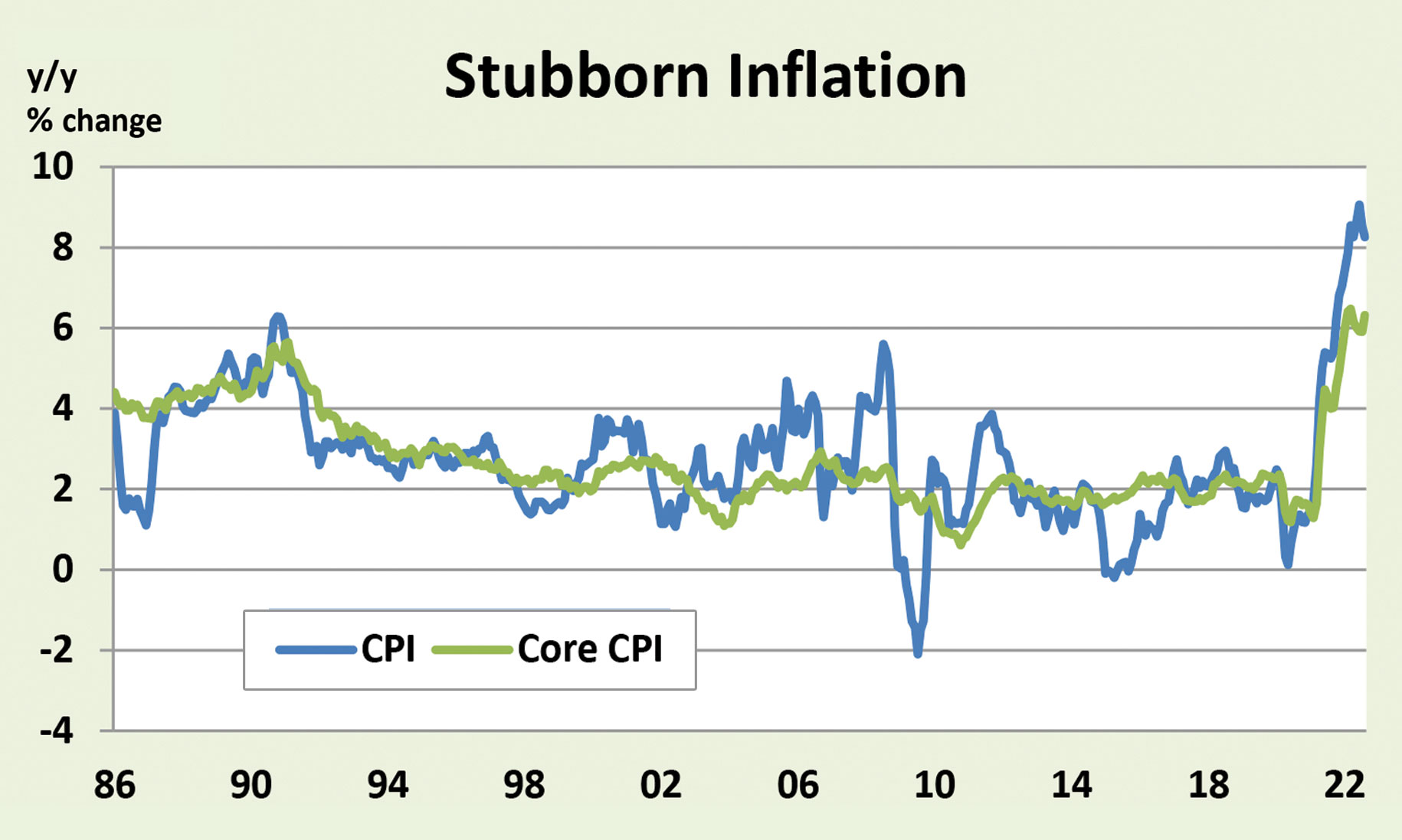 The most belligerent party-pooper of course is inflation, which is not only overstaying its welcome, but is becoming ever-more threatening. The August consumer price report was probably the last straw for the Federal Reserve, which amped up its rate-hiking campaign on September 21, lifting its benchmark interest rate by 0.75-percentage point, the third consecutive increase of that size and boosting the level to 3.25 percent. That’s above the peak rate seen during the long ten-year expansion that ended with the onset of the pandemic – and there’s more to come, as inflation is more entrenched than thought a few months ago.

The aggressive response to curbing inflation significantly raises the odds the economy will suffer a recession some- time next year. While disconcerting, it is a gamble the Fed is willing to take. Until recently, it was thought that the Fed would pivot to a less restrictive stance following the September 21 meeting and perhaps start cutting rates as early as next spring to short-circuit a recession. But hopes for a soft-landing dimmed as it became apparent that inflation is being driven by stickier prices that are not as sensitive to weakening demand as, say, prices of goods that can easily be postponed. That means the Fed needs to step on the brakes even harder so that the decline in demand-sensitive prices more than offsets the sticky price gains. The longer inflation stays elevated, the more likely it will become entrenched in public expectations, something the Fed strenuously wants to avoid. Restoring its inflation-fighting credibility is key to the Fed’s strategy.

Just how severely the Fed needs to slam on the brakes is a matter of widespread disagreement. Some experts, most notably former Treasury Secretary Larry Summers, believes the Fed must drive up unemployment to at least 6 percent to bring inflation under control. Against the current 3.7 percent rate, that would throw millions of workers out of jobs and undoubtedly constitute a severe downturn – not as bad as the 2008 financial crisis, but more drastic than most earlier ones. According to Summers and his like-thinking colleagues, once the inflation genie is out of the bottle – as it clearly is now – only tough measures would put it back.

At the other extreme are those who are much more sanguine about the challenge. Although they readily admit inflation has been far higher and enduring than earlier thought, they also believe that many of the forces driving it are related to special shocks linked to the pandemic, supply disruptions, and the War in Ukraine. As the health situation continues to improve, spurring consumers to normalize spending habits, and supply bottlenecks ease, inflation will recede on its own. The endgame for the War in Ukraine is unpredictable, but the spike in energy prices it caused is reversing, reflecting weaker global growth that reduced the demand for oil. From this lens, the Fed does not have to turn the monetary screws as tightly as the inflation hawks think is necessary. 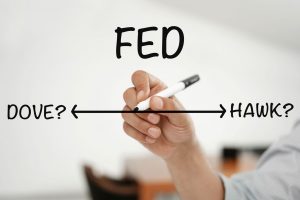 Both arguments can make a strong case. The inflation hawks can correctly point to the fact that we have not seen inflation of this magnitude since the 1980s, not only in terms of the increase – a run-up from under to 2 percent to 8.3 percent in less than two years – but also its breadth, as prices of food, clothing, and other essentials that consumers buy on a daily basis have surged. Labor costs are also accelerating, evoking the dreaded wage-price cycle that is difficult to arrest. But the doves also have ammunition, noting that bottlenecks are thawing, bringing more supply to the market and prices of many goods have already fallen. And while wages are up, there is some evidence that they are more reactive to price changes than causes of them. As price gains slow so too will wage growth.

We fall somewhere between these two extremes but do expect a mild recession to set in during the first half of 2023. To be sure, the economy has not buckled yet; as noted, job growth remains strong and consumers – the main growth driver – are keeping their wallets open. But history suggests that activity will eventually turn over. Historically, a recession has never been avoided when the unemployment rate rises by at least half-percent, and even the Fed expects a rise of that magnitude over the next year. According to the Summary of Economic Projections released at the September 21 policy meeting, the jobless rate is expected to rise to 4.4 percent next year.

Importantly, it is hard to see the economy surviving the steep rate hikes planned by the Fed, with the benchmark Federal Funds expected to reach 4.6 percent early next year. That would be the most rapid tightening of monetary policy since the early 1980s. Indeed, Fed Chair Powell is channeling Paul Volcker, the Fed chief who orchestrated the extreme inflation-fighting campaign forty years ago that sent the economy into two deep recessions in the 1980s. Powell has no intention of going that far, but he has asserted in no uncertain terms that officials will do whatever it takes to rein in inflation.

Although not explicitly saying so, that includes accepting a recession. To be sure, Fed officials still believe there’s a good chance they can bring down inflation without sending the economy into a tailspin. But history is not on their side and there’s the very real chance that policy tightening will go too far, which would cause more damage to the economy than hoped. Keep in mind that other forces besides monetary policy are also weighing on activity. Fiscal aid that propped up the economy so importantly in 2021 has ended and that stimulus has morphed into a serious growth drag, as the Federal deficit is shrinking rapidly.

It’s also important to remember that the U.S. does not exist in a vacuum but responds to global forces as well as domestic ones. Critically, the nation’s main trading partners are in worse shape than we are; Europe, which is heavily dependent on Russian oil and natural gas, is sagging under the weight of surging energy prices, and China – the major global growth driver following the Great Recession – is reeling under its zero-Covid policy that is shutting down wide swaths of factory output. Finally, the inflation fight is not just a U.S. challenge; about 90 central banks have raised interest rates this year, heightening the risk of a global recession.

While the overall U.S. economy is still growing, the Fed’s actions have already sent at least one key sector, housing, into a recession. Existing home sales have declined for seven consecutive months – the longest stretch since the housing collapse in 2007 and are currently 20 percent below last year’s level. The reason is obvious: housing affordability has crashed thanks to sky-high mortgage rates together with record home prices. For the first time since 2008, the 30-year mortgage rate exceeds 6 percent, more than twice the level of a year ago. 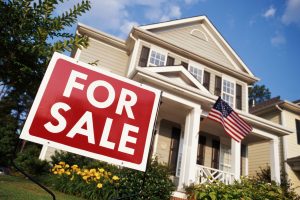 The collapse in sales is, unsurprisingly, feeding through into homebuilder sentiment, which stands at an eight-year low and is affecting construction plans. Single-family building permits – a forward-looking gauge of construction spending – fell to the lowest level since the pandemic in August. The only bright spot in the housing sector is the ongoing strength in apartment building, where permits and starts increased again in August. But that strength has a dark side, as the strong demand for rental units is coming from households that are being priced out of the single-family market.

To be sure, residential construction outlays comprise a small fraction of the overall economy, accounting for less than 5 percent of GDP. But housing punches above its weight. When people buy a home, they also buy a bunch of stuff that goes inside, including furnishings, appliances, and fixtures, and incur moving expenses as well. Not surprisingly, the slump in home sales is taking a steep toll on sellers of home-related goods and services. Sales fell 5.7 percent at appliance stores and 1.6 percent at furniture stores from a year ago, the only two retail categories where sales are trailing year ago levels. 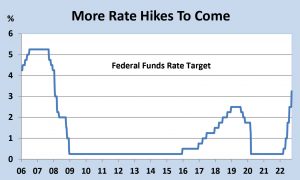 The Fed’s unconditional commitment to lower inflation amid a still strong labor market means that more rate hikes lie ahead. At the September policy meeting, the median forecast of Fed officials point to another 1.25 percent hike in the benchmark Federal funds rate before the end of the year and at least another quarter point increase in early 2023. Simply put, the decade of almost free money is in the rear-view mirror and the economy will struggle to adjust to the rapid increase in borrowing costs that is well underway. Housing, in time-honored fashion, is the first shoe to drop but other rate-sensitive purchases – autos and other big-ticket items that require financing – will follow. This, in turn, will lead to broader cutbacks in production and jobs and, most likely, a recession.

Nonetheless, the downturn should be short and mild. The economy is not vulnerable to forces that in the past have caused deep recessions. Banks and other financial institutions have strong balance sheets, corporations have wide profit margins that can absorb revenue losses without dramatically slashing jobs, and households have built up a formidable cushion of savings and other assets that should keep a floor under spending. That said, even if the recession is mild, it will still prove pretty painful for many firms and households. 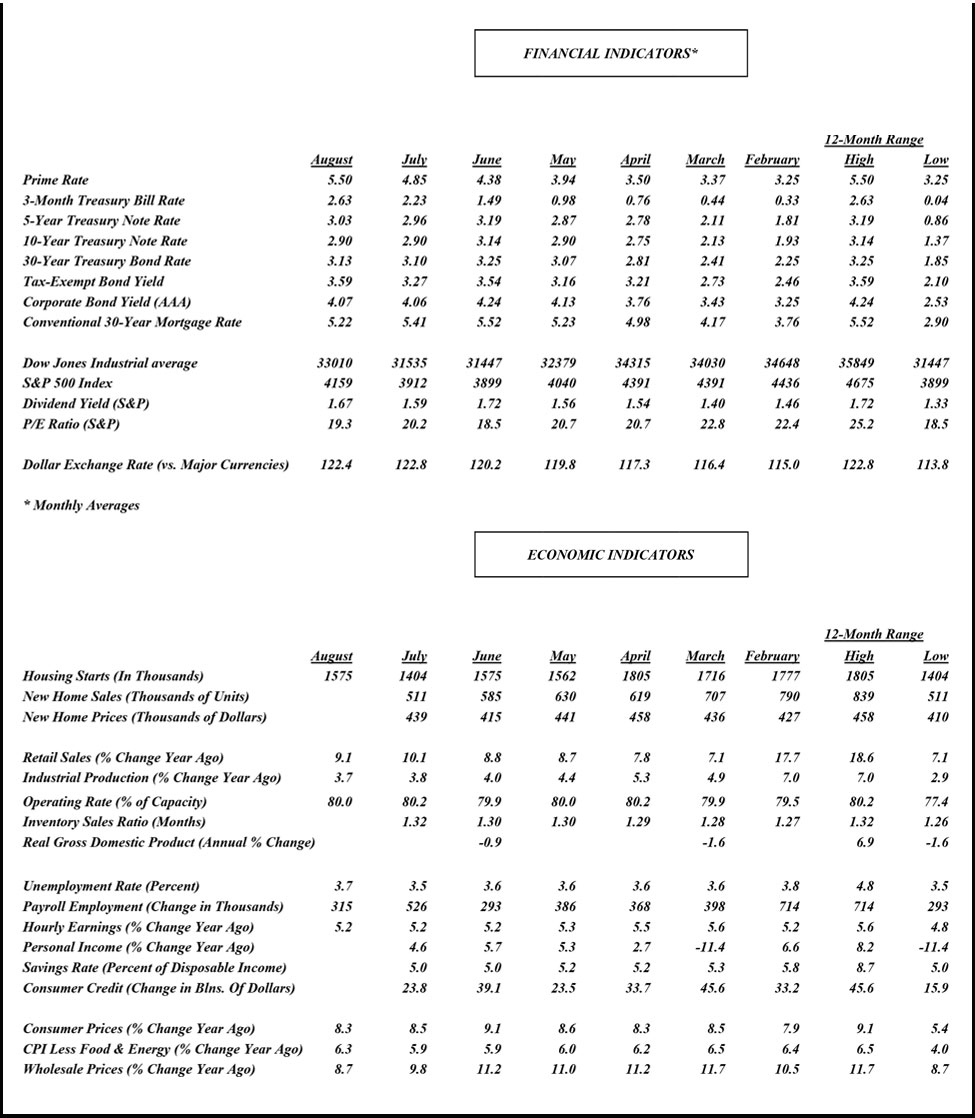