This Too Won’t Last

Has the inflation worm turned? It’s still early, but the signs are encouraging as an expanding list of price measures are pointing to slower increases. Whether this favorable trend continues is an open question. Many factors underpinned the astonishing inflation cycle of the past two years and many don’t fit into conventional economic models that make predictions a bit easier. This is not a garden-variety demand/supply imbalance that traditional policies are designed to handle. Instead, the economy has been blind-sided by a barrage of surprising external shocks linked to the pandemic, a disruptive war, and climate changes – all of which continue to wreak havoc on prices. Indeed, the drying up of the Mississippi River – a major transportation conduit in the U.S. – is just the latest reminder to never count out the unexpected.

Importantly, the stakes are high if the inflation spiral is not properly tackled. Millions of savers would see the purchasing power of their nest eggs shrink as they enter their golden years. Worker paychecks would not buy as many goods and services as before, resulting in lower living standards. A broadening swath of the population would be shut out of the housing market and unable to make other big-ticket purchases due to an inflation-induced climb in borrowing costs. More generally, once inflation becomes firmly entrenched in the economic landscape, it inevitably brings on a policy response that sends the economy into a recession, throwing millions of workers out of jobs.

The good news is that policymakers are of one mind regarding the dangers unchecked price increases pose to the nation. During the midterm elections, the inflation scourge was a key campaign issue and neither Congress nor the administration is advocating expansive tax and spending policies that would make things worse. Importantly, the Federal Reserve, which controls the critical tools to fight inflation, is firmly committed to reining it in, adopting the most aggressive rate-hiking agenda since the 1980s. As long as this policy backdrop stays in place, there’s a good chance the war on inflation will be won, although it’s unclear how much damage to the economy is necessary to win the battle. The wildcard is the behavior of those external influences over which policymakers have little control. But even on that score, prospects are turning more favorable.

Following nearly two years of escalating inflation that has overshadowed just about every other economic concern of Americans, it may seem that we have entered an era when outsized price gains are a normal condition. But history suggests otherwise. In fact, sharp upward spikes of the scale now underway are unusual. Between 1955 and 2021, there have been only eight instances when comparable inflation spikes have taken place. Encouragingly, following each of those surges, inflation fell sharply and remained low for extended periods of time. 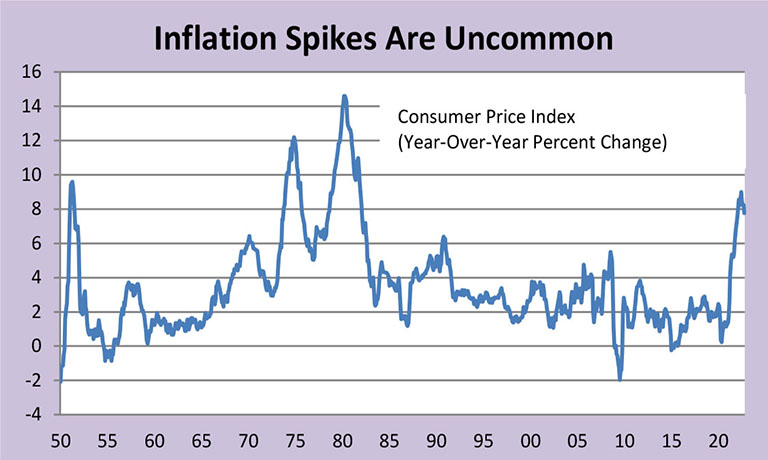 While it is widely expected that inflation will fall back next year, the speed in which it will decline is highly uncertain. It’s also unclear how far from the current 7.7 percent inflation would have to slow before the Federal Reserve pivots away from its aggressive rate-hiking campaign. If the retreat towards the Fed’s 2 percent target is slow and gradual, the Fed could well decide that more of a push is needed. At best, it could decide to pause and keep interest rates at elevated levels for a prolonged time. But if inflation falls rapidly, Fed officials could decide to start cutting rates at some point in 2023.

Against this backdrop, it makes sense to look at the behavior of inflation after previous inflation spikes as a guide to what might plausibly happen next. These earlier spikes occurred in two distinct phases. The first cluster occurred in the 1960s and 1970s. Each of those spikes was followed by a partial fall-back in inflation and then another upward surge that resulted in a higher peak inflation rate than the previous one. The other three spikes all occurred after the Fed established an inflation target, and their peaks to troughs were far smaller. What’s more, inflation stayed elevated for shorter periods of time, and the subsequent declines took the inflation rate below 2 percent, although only very briefly following the 2005 spike. The post 2008 retreat was the only period when there was a substantial and sustained undershoot of the target.

From our lens, the last three inflation episodes are a better guide to the likely behavior of inflation over the next year or two. A key reason is that today’s economy looks much more like it did beginning around the turn of the century than in the 1960s or 1970s. For one, unlike those earlier episodes, the Federal Reserve has elevated the importance of taming inflation as a policy goal, even explicitly stating a 2 percent target since 2012. In the 1960s and 1970s, the main emphasis was on achieving maximum employment. That’s important because if the public believes the Fed is determined to hit its inflation target whatever the cost, inflation expectations are more likely to remain in check.

For another, labor had a much greater influence on price-setting arrangements in the 1960s and 70s than now. A larger fraction of the workforce belonged to powerful unions, and cost of living adjustment (COLAs) embedded in worker pay were far more prevalent then. Finally, the U.S. is more interconnected with the global economy than 40 or 50 years ago, and the outsourcing of workers and production has gone a long way towards keeping prices lower than otherwise.

And while the last three inflation episodes had differences, the current upsurge bears a strong resemblance to the one in 2008-2009. Both have been global in nature – inflation overseas is even worse than it is in the U.S. – and to a significant extent, both, as well as the one in the late 1990s, reflect surging oil and food prices. That said, there is one important distinction between now and the last three. The earlier ones were more narrowly concentrated than the current inflation spike. Indeed, takeout food and energy, and the so-called core inflation rate stayed fairly close to the Fed’s 2 percent target during the last three inflation surges. In 2022, however, the core rate peaked at 6.6 percent, and is still running at an elevated 6.3 percent pace as of October.

Not surprisingly, in those earlier episodes, when food and energy prices fell, both headline and core inflation coalesced at low levels. That’s not likely to happen now because the inflation surge this time has been much broader. Indeed, the share of components in the core basket of goods and services experiencing very high inflation is substantially greater today than in 2008 with an inflation rate of over 15 percent.

Hence, if volatile food and energy prices were to collapse – a possible but not likely prospect – what we would see is a collapse in the headline inflation rate, but not in the core inflation rate. That would be a welcome development for the millions of households that spend more of their budgets on food and gasoline than wealthier people. But it would not satisfy Fed officials who recognize that price changes on the broader basket of goods and services – the core group – are more reflective of underlying inflation trends.

It’s critical, therefore, for those stickier prices to start slowing from their current elevated rate as well. That won’t be easy because most of those items are for services that are more labor intensive and in less productive industries, such as restaurants, medical services and, most important, housing. Even if demand for these services weakens, prices would be slow to respond. Employers, for example, may lay off workers, but they rarely, if ever, slash wages. Meanwhile, people need a place to live. If home prices become too expensive, would-be buyers turn to rental units. Unsurprisingly, high home prices combined with surging mortgage rates have done just that, sending rents sharply higher. And since rents account for an outsized 40 percent of the core CPI, it has been a major driver of inflation.

Despite the difficulty in reining in service prices, there are compelling reasons to expect core inflation to fall back next year. It is often argued that the best cure for high prices is… high prices. With housing becoming unaffordable for an ever-broadening swath of the population, home sales have collapsed and home prices are now declining. In time, this will filter through to the rental market; indeed, there is evidence that rent increases on new leases are already getting smaller. This trend is expected to continue into next year, and start to weigh down increases in the core CPI. 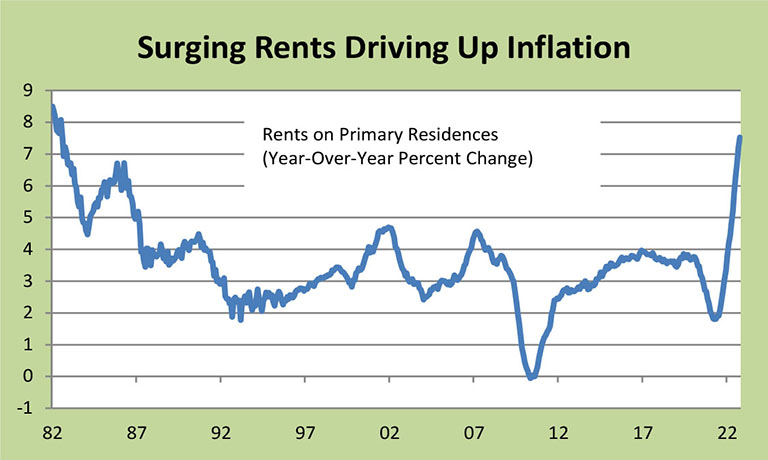 Clearly, the Fed’s rate-hiking campaign – which contributed to a doubling of mortgage rates this year – is playing a major role in slowing the rise in housing costs. Meanwhile, the Fed is getting help from the easing of external forces that have stoked the inflation embers over the past year. Supply-chain bottlenecks are clearing up, resulting in plunging shipping costs, and improving health conditions have relieved pressure on goods prices, as consumers are shifting spending from material things purchased during lockdowns to in-person activities.

So far, however, higher interest rates haven’t put much of a dent on demand outside of the housing sector. Consumers are still spending at a lofty pace, as evidenced by the stronger than expected retail sales for October, and business plans for capital spending remains robust. This means more rate hikes are on the way as the Fed strives to cool off demand pressures that are fueling inflation, raising the odds of a recession next year. The good news is that the forces underpinning consumer and business spending – healthy household balance sheets, a strong job market and strong profits – should also cushion the severity of any downturn. Importantly, they even keep a narrow path open for the desired soft landing – curbing inflation without inducing a recession – that the Fed still hopes to achieve.