Recession Ahead: Will It Be Mild Or Severe?

It was a rough 2022, but the U.S. economy survived the myriad headwinds thrown at it, including raging inflation, geopolitical stress, skyrocketing interest rates, declining stock prices, a recurring COVID-19 wave, and the most aggressive pivot towards monetary tightening in more than forty years. Against this backdrop, it’s hard to believe that the nation avoided a recession. The fact that it has is a tribute to the economy’s resilience under pressure. But as the curtain rises on 2023, that resilience will be tested again, and it will take a lot of luck to avoid a recession this year because the headwinds are about to intensify. 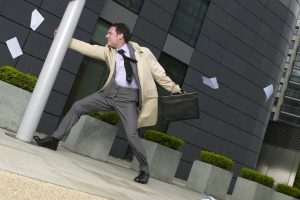 How well the economy holds up will depend on some unresolved questions: How hard will the Federal Reserve keep pushing on the brakes? How will the inflation outlook unfold? Will the job market stay strong? Will consumers, the economy’s main growth driver, keep on spending? To be sure, these questions are interdependent, so the answer to one will influence the others. But the bigger picture can only come into focus by examining each one and how they interact.

Even if a recession unfolds this year, the question is how severe will it be? The likelihood is that the economy will suffer a downturn, probably by mid-year. But it should be relatively mild unless some unexpected shock delivers a more serious blow and amplifies the headwinds that are already gaining traction. Given the uncertainties linked to the war in Ukraine and lurking risks in the financial system (think Crypto), that’s not something to be dismissed lightly.

Will The Fed Pause Or Pivot?

In our view, the biggest threat to the economy in the coming year is the Federal Reserve going too far in its quest to curb inflation. Some believe that it’s already time to pause the aggressive rate-hiking campaign underway since March, punctuated by the latest half-percentage point increase in the Fed’s target rate on December 14th. With that increase, the central bank lifted its policy rate by more than 4 percentage points, the steepest increase in so short a time span on record. The era of cheap money has fallen by the wayside and many borrowers are feeling the pain, particularly those seeking mortgages to buy a home. 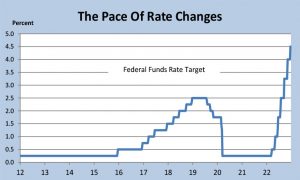 But aside from the profound damage on home sales, the full impact of the Fed’s rate hikes are yet to be felt. It’s an accepted principle that changes in interest rates affect the economy with long and variable lags. Because the rate hikes thus far have been so condensed and sharp, the lag has no doubt been shortened somewhat. The spike in auto loan rates, for example, is likely contributing to the slump in car sales, although parts shortages that have curtailed supply have also played a major role. But the broader and more severe impact will be felt next year, and no one knows how much damage to economic activity will ultimately play out.

At the last policy meeting in mid-December, Fed officials expected to raise rates by another three-quarters of a percentage point in early 2023, lifting the target federal funds rate to a range of 5.1%–5.4%, and hold it there for the rest of the year. That’s a half percent higher than the Fed projected in September, and higher than many think the economy can bear. Indeed, the financial markets believe rates that high will surely bring on a recession, and prompt the Fed to pivot towards cutting rates next year. That may well occur, but Fed Chair Powell has steadfastly asserted that policy will stay on course for as long as it takes to stifle inflation, even if it brings on a recession.

Making Up For Lost Time

Historically, the Fed has maintained that its policy decisions are data dependent. When the facts change, officials often change their minds. But not always. Recall that inflation was dormant for a decade prior to the pandemic, before breaking out suddenly in 2021. But while inflation accelerated throughout that year, the Fed opted to ignore the facts – believing the acceleration was transitory – and kept a lid on interest rates. By the time it acknowledged that the facts had changed and inflation was becoming more entrenched in the economy, it finally changed its mind – and did so with a vengeance, as evidenced by the extremely hawkish pivot towards a restrictive policy in 2022.

In the eyes of many, the abrupt about-face reflects a desperate effort by the Fed to make up for lost time. The unprecedented swift and sharp rate increases over the past eight months were taken to compensate for the delayed response that should have started at least six months earlier. In a sense, the Fed violated its own long-held principle, that waiting too long to curb inflation inevitably requires harsher measures later on to bring it to heel. Had the Fed started raising rates earlier, it might not have had to raise them as much as it has, and inflation might not have gained as much traction.

To be fair, the inflation outbreak did have transitory elements and was ignited by factors the Fed could not control. Its tools are designed to influence demand, but supply shocks were the main catalyst early on for the upsurge. Also, the trillions of dollars of fiscal support meant to cushion the economy from the pandemic made the Fed’s job of curbing demand much more difficult, as those funds poured into the spending stream and gave households the financial muscle to afford the higher prices on goods and services.

But the supply-chain snarls that underpinned the inflation surge in 2021 and early 2022 have mostly healed. U.S. retailers and factories no longer have difficulty getting goods to sell or to complete the production process. The logjam at ports has cleared, and shipping costs have fallen sharply in recent months. Many retailers are stuck with excess inventories, prompting sales with deep discounts to clear shelves. Amazon held two Prime Day sales over the summer and other high-profile retailers did the same.

Indeed, the goods shortage that catalyzed inflation last year is now having the opposite effect. Prices of goods have fallen for four consecutive months through November, contributing to a marked slowing of inflation. Not only have prices of goods fallen because of the more abundant supply of products available, consumer buying patterns are changing as people live more normal lives despite the still very present threat of COVID. They are going to concerts, sporting events, traveling, and generally partaking in leisure and hospitality experiences; all of which were shunned when the pandemic kept people indoors and heightened the demand for physical goods that made living spaces more tolerable.

Simply put, as consumers are spending more of their dollars on services, the demand for goods has softened even as inventories are piling up – a combination that is pulling their prices down. At the same time, the financial muscle provided by generous government stimulus checks during the pandemic is fading. Households built up a formidable cushion of pandemic savings that powered consumption even as inflation robbed the purchasing power of low- and middle-income families. But that savings cushion is drying up. True, it is estimated that more than a trillion dollars of excess savings still resides in bank accounts. But most – and by now probably all – of that is held by upper-income families that tend to save rather than spend their incremental wealth.

Thanks to the combination of softer demand for goods, increased supply, and diminished household purchasing power, consumer price increases are slowing. In November, the annual rate of inflation as measured by the Consumer Price Index slipped to 7.1 percent from a peak of over 9 percent in June. The Fed uses a different inflation gauge, the personal consumption deflator, as its yardstick, which is running about a percentage point lower. Even so, there is a wide gap between the current rate and the Fed’s 2 percent target.

Reaching that target will not be easy. As noted, the low-hanging fruit has been picked as goods prices are following the laws of supply and demand, and heading steadily down. But goods constitute less than 40 percent of what consumers buy; the bigger challenge is to slow service prices, which are stickier and remain stubbornly high. Of course, that’s where the rubber meets the road in terms of economic outlook. Most service providers, such as restaurants, rely heavily on workers to generate revenues, and labor costs are their biggest expense. The pickup in wage growth over the past year, in turn, is a key reason inflation in services has remained elevated. Fed Chair Powell has understandably pointed out that inflation is not likely to slow to 2 percent as long as wages are increasing by more than 5 percent, which is the case, according to most relevant measures.

Not surprisingly, the Fed’s deep concern about inflation is linked to the ongoing strength in the job market, where there are about twice as many job openings as unemployed workers. Hence, workers are in the driver’s seat, putting upward pressure on wages. The Fed’s goal is to reduce those pressures without causing a severe increase in unemployment, gliding the economy into a “soft landing”. Ideally, the rate increases would narrow the gap between job openings and unemployment, thus lessening competition for workers and weakening their bargaining position. There is some evidence the gap is closing as new job listings are slowing and some sectors, such as technology, are firing workers.

But wage growth has not yet slowed, and the Fed is committed to keeping its foot on the brakes until it does. Its latest projection sees the unemployment rate rising 0.9 percent to 4.6 percent in 2023, and the economy has never avoided a recession when the rate increased by more than 0.5 percent. Nor does it usually stop rising after that, turning a mild recession into a more severe one.

We expect this time will be different because there are no glaring imbalances in household or business balance sheets that typically precede a sharp downturn. What’s more, businesses are likely to retain more workers than otherwise in the face of a slowing economy because of the severe labor shortages over the past year. The greatest risk of a more severe downturn is that the Fed stays more restrictive than necessary and doesn’t wait for the lagged effects of its previous rate hikes to kick in. If the financial markets are right, and the Fed eases up on the brakes this year, that fate can be avoided. 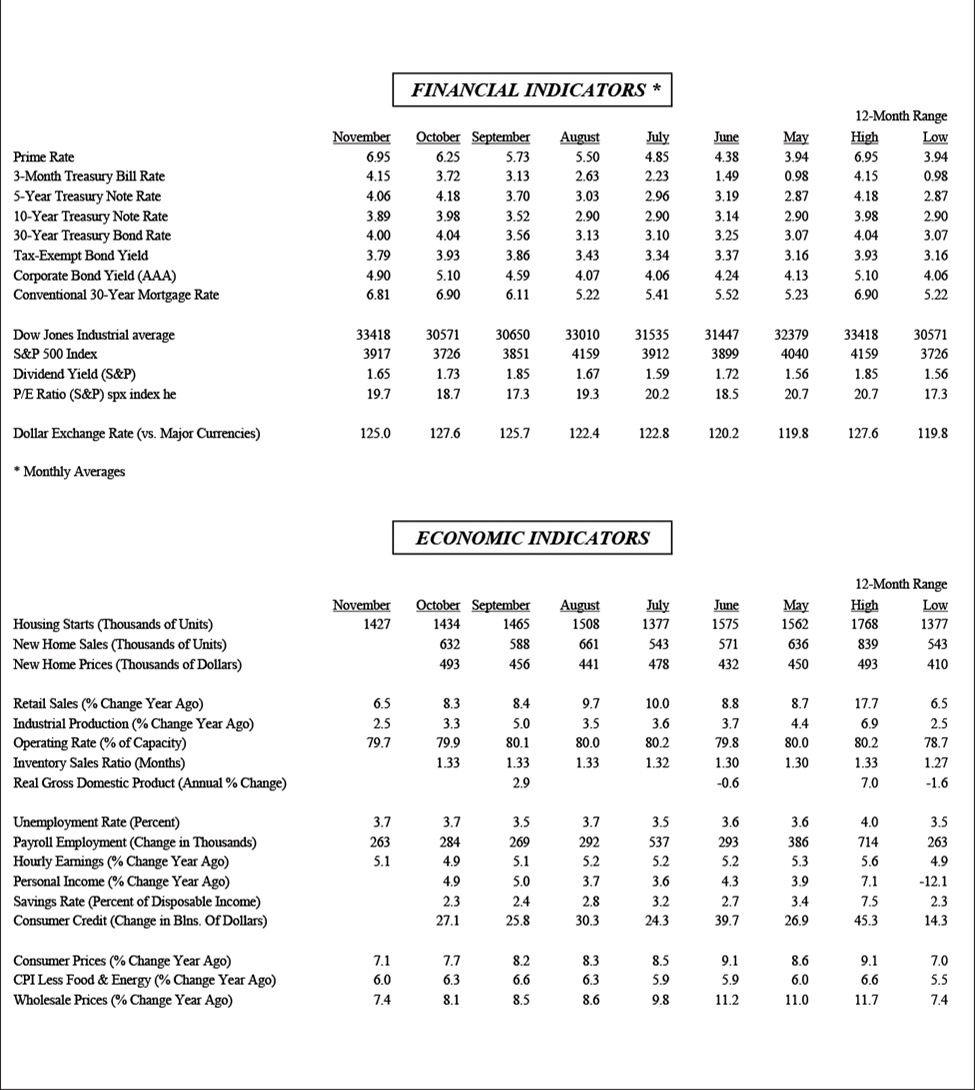