Tumultuous Start To The Year

With barely two months in the books, it is hard to remember another year that opened with as much drama as 2022. The swirl of events included the surge and rapid descent of the Omicron variant, spiraling inflation, heart-throbbing geopolitical tensions with Russia, a hawkish pivot by the central bank, and tumultuous moves in the financial markets. Against this backdrop the economy wobbled but remained standing — albeit just barely. Barring a remarkably quick turnaround, the first quarter will likely show little, if any, growth at all. 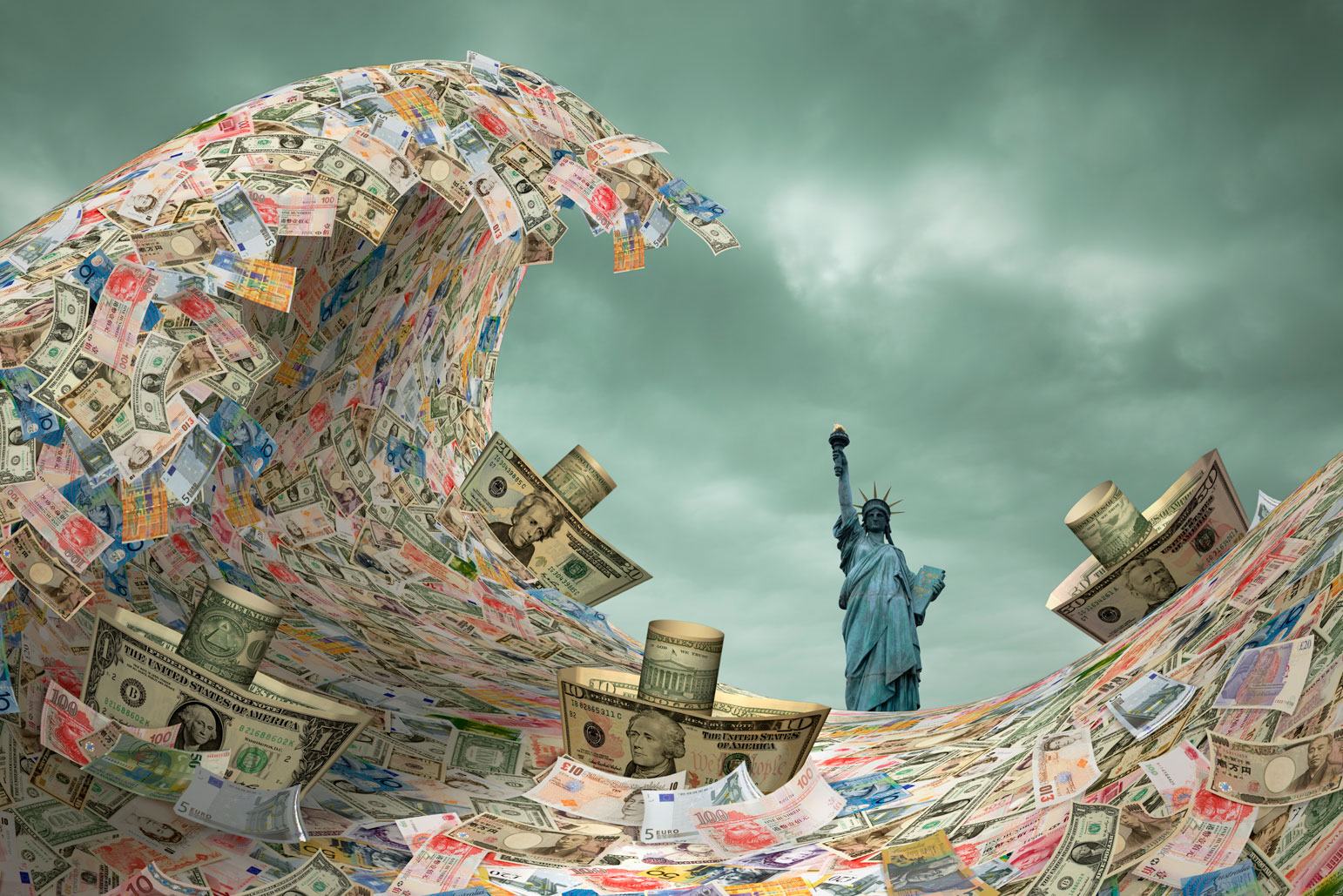 While the term “transitory” certainly has a tainted reputation, it aptly describes the situation the economy now finds itself in. Assuming no other variant of Covid-19 emerges, the door is open for a healthy revival in activity in the spring. Indeed, even the setback in growth during the current quarter overstates the economy’s weakness. Gross domestic product, the broadest and most popular measure of the economy’s performance, essentially tracks output, which has been suppressed by pandemic-related bottlenecks at ports, factory shutdowns overseas, and labor shortages in the U.S., all of which curtailed the supply of goods and services that households and businesses want to buy.

But the economy’s underpinnings remain solid. Consumers have a huge appetite for goods, as evidenced by retail sales in January, which increased more than twice as much as expected. What’s more, the economy’s jobs engine is running at full speed, indicating that there is plenty of purchasing power to fuel a growth revival. That, of course, amplifies the inflation problem that has become the number one concern in the U.S., sinking household confidence and stoking a potentially strong response by the Federal Reserve. The central bank holds its next policy meeting on March 15-16, and it is expected to hike rates for the first time in more than three years to take some steam out of demand. The question is, how aggressively will the Fed step on the brakes to bring demand into alignment with supply without choking off growth? Based on the Fed’s checkered past in guiding the economy onto a soft landing, many skeptics already think the next recession is not too far off.

The Fed is ready to take away the punch bowl. After two years of supplying an enormous amount of liquidity and keeping short-term rates at near zero, policymakers have decided it’s time to remove some juice from the economy to keep revelers in check. To this end, it is about to make loans more expensive for borrowers and terminate its two-year program of monthly government bond purchases. The hope is that the withdrawal of stimulus will dampen the celebration, but not kill the party. 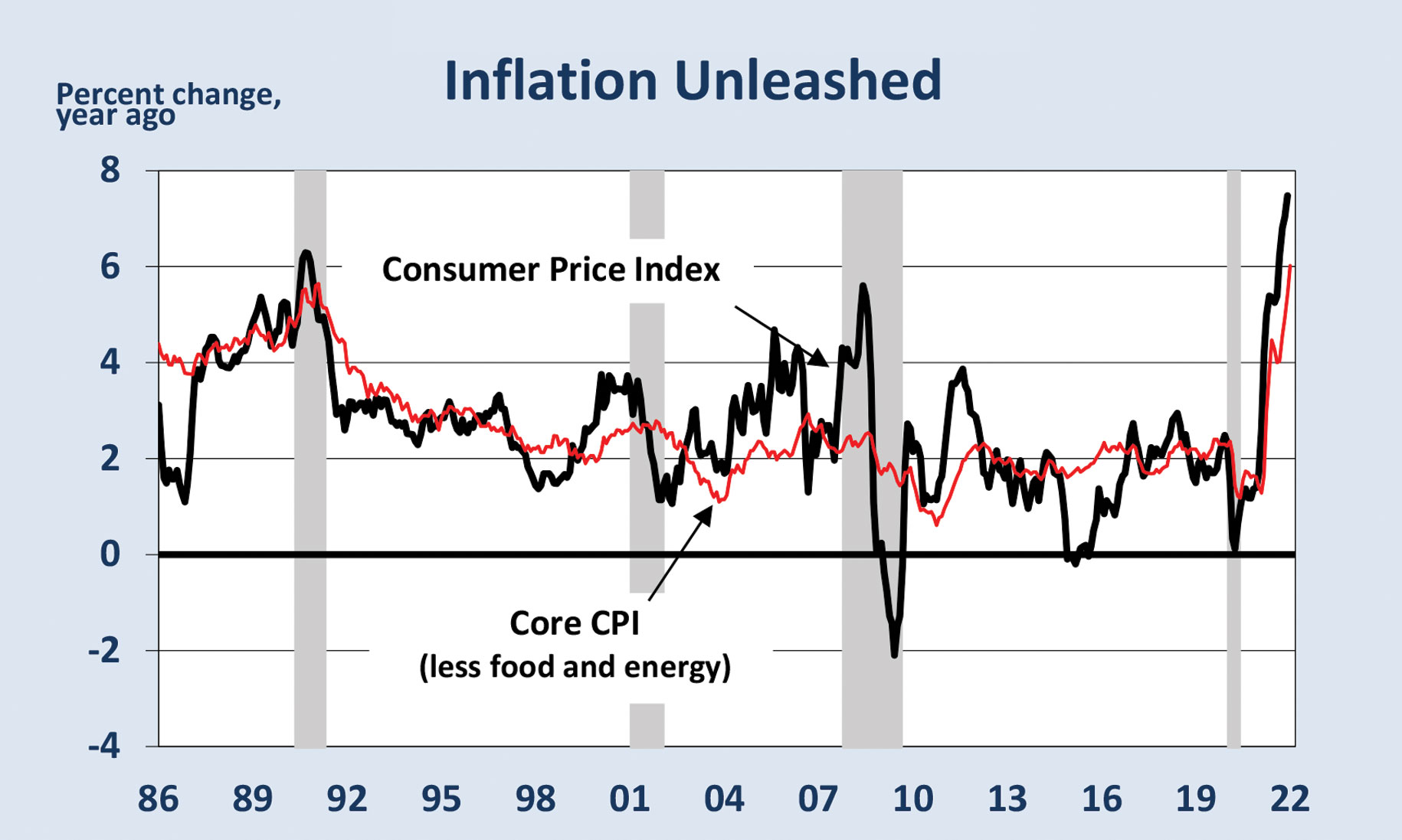 The hawkish pivot by the central bank is not surprising; many believe it has waited too long to make the move. Amid pandemic related supply shortages, the combination of massive fiscal and monetary stimulus has not only prevented demand from collapsing, it has powered it above pre-pandemic levels. Hence, inflation has taken off – a time-honored response when too much money chases too few goods. The annual increase in the consumer price index surged to a 40-year high of 7.5 percent in January, a climb that has been steeper and longer-lasting than policy makers had expected.

To be fair, the Fed’s overwhelming response to the onset of Covid-19 in 2020 was understandable. In March and April of that year, more than 22 million workers were thrown out of their jobs and fears of another Great Depression ran very high. The Fed, as well as the administration, were in uncharted waters, not knowing how long or how severe the pandemic would turn out to be, nor how much damage it would inflict on the economy. Against that backdrop, nothing less than pulling out all stops to avert an economic calamity was in order.

But just as few knew how bad things would get, hardly anyone expected how swift and powerful the recovery would turn out to be. The two-month recession in 2020 was the shortest on record, and the revival has outpaced any previous postwar upturns. It took less than two years for the unemployment rate to unwind virtually all of its recession surge, about half the usual recovery time; that’s all the more remarkable since the unemployment rate climbed to a post war high of 14.7 percent in April 2020. The current rate, as of January, stood at 3.9 percent, only a tad above its all-time low and a level historically associated with full employment.

That said, the unemployment rate fails to fully capture the condition of the job market because it doesn’t count the huge number of people that have left the labor force. Although the labor force participation rate has inched up in recent months, at 62.2 percent in January, it is still well below the pre-pandemic level of 63.4 percent. That translates into 2 million people still missing from the labor force. With so many workers on the sidelines, employers are struggling to fill open positions. At the start of the year, there were 4 million more job listings than applicants, the widest margin ever recorded.

Not surprisingly, the labor shortage has conferred more bargaining power to workers. Wages are rising at a rapid clip, with average hourly earnings for all workers rising 5.7 percent in January from a year earlier. Except for an aberrational surge in April of 2020, when low-wage workers were purged from payrolls during the nationwide lockdown, that is the steepest earnings increase since 1982. While wages in low-paying industries, where the labor shortage is most acute, led the way up for most of the past year, the gains are spreading throughout the labor force.

From a social viewpoint, the step-up in worker pay following decades of lagging wages is a welcome development. From a macro perspective, however, the benefits are a mixed blessing. For one, workers are both victims as well as contributing to the inflation spiral now underway. They are victims because wages, though accelerating, are still lagging price increases, so even the fatter paychecks are losing purchasing power. Meanwhile, the pickup in wages is spurring businesses to hike prices to cover the rise in labor costs. As long as they can make the price increases stick, they will continue to grant higher pay to workers. Hence, the seeds of a classic wage-price spiral have been planted.

This is where the rubber meets the road for policymakers and investors. What makes the solution so complicated is that rising labor costs are only one component fueling the inflation spiral. If the others were less potent, the juice behind the wage-price juggernaut would quickly dry up. For example, if the pandemic-related supply-chain snarls that are preventing goods from reaching markets ease, the ability of companies to pass on higher labor costs would weaken. With more goods available, consumers would have broader leeway to price shop. More supply relative to demand is a sure-fire path to lower prices. The news on this front is encouraging, as Covid case counts have fallen dramatically, delivery times are shortening, and businesses are starting to rebuild inventories, although there is still a ways to go before shelves are fully stocked.

Likewise, if labor shortages ease, so would worker bargaining power to demand ever-larger wage increases. Here too, prospects are improving. The rapid decline in Covid case counts is reducing fears of infection on the job site and allowing schools to reopen full time, relieving working parents of childcare responsibilities. What’s more, the wave of younger seniors leaving the labor force is starting to reverse, as early retirees are being lured back by attractive pay packages, diminishing financial cushions – and inflation that more quickly eats into retirement nest eggs.

That leaves excess demand as a key driving force behind the inflation flareup. As indicated by the strength in retail sales in January, consumers still have a big appetite to purchase goods. But the early-year strength in sales still benefited from the massive fiscal support during the pandemic as well as the ultra-low interest rates engineered by the Fed. Both, however, will soon be working in the opposite direction. Fiscal aid has all but dried up with the final childcare tax payment in December; the withdrawal of $3.6 trillion of stimulus provided during the pandemic will deliver a big blow to disposable incomes and household spending power this year.

As more supply comes online and demand begins to weaken, the fire under inflation should start to ebb. But that inflection point may still be a few months away. The supply chain bottlenecks will take time to unwind, and some materials – particularly computer chips essential for auto production – are expected to remain in short supply until at least early 2023. While the supply of labor should increase as more people return to the workforce, chronic labor shortages will not disappear. An aging population, a rethinking of work/life balance during the pandemic, and healthy balance sheets are encouraging more people to remain on the sidelines than otherwise. That may well keep upward pressure on wages, but if businesses can extract more productivity out of the labor force – by investing in technology and capital equipment – they could afford to absorb higher labor costs without lifting prices.

To be sure, the Federal Reserve cannot wait for dis-inflationary forces to gain traction, as it would fall further behind the inflation curve. In turn, risks allowing inflationary expectations to become more firmly embedded in the mindset of households and businesses, could become a self-fulfilling prophecy. The economy no longer needs the life support of the ultra-low interest rates put in place during the pandemic, and a series of gradual well-communicated rate increases should not kill the expansion. The danger is that supply constraints will keep inflation higher than the Fed is willing to tolerate, prompting it to slam on the brakes too vigorously. Such a restrictive policy would do nothing to expand supply but, by choking off demand, it would send the economy into a tailspin. It’s critically important for the Fed not to go down that road again. It probably won’t, but the historical record is not encouraging. 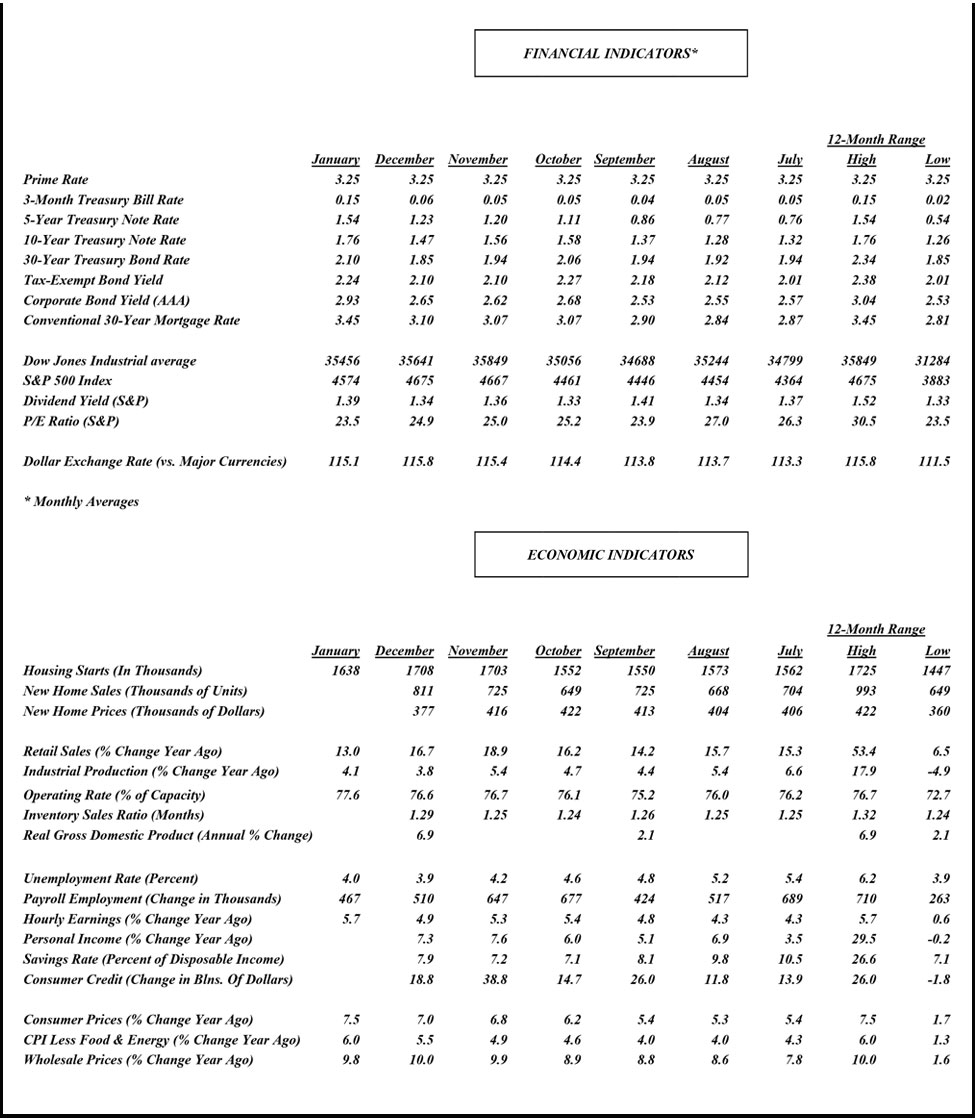